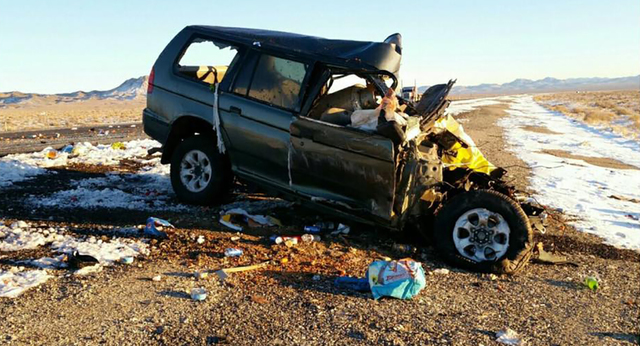 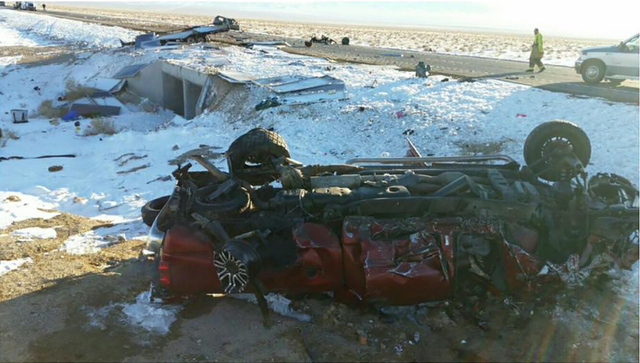 A former Nye County Sheriff’s deputy was among three people killed Wednesday in a two-vehicle collision on U.S. Highway 95 between Goldfield and Tonopah. Courtesy of the Nevada Highway Patrol

The deceased former deputy was identified as Mike McKinnis by Sheriff Sharon Wehrly to the Tonopah Times-Bonanza.

In addition to having been a full-time Nye County deputy, McKinnis later had served as a reserve deputy sheriff, Wehrly said.

“He was an excellent deputy, a very nice guy,” Wehrly said. “The department is really, really sad.”

The sheriff’s office has offered its Honor Guard for his funeral, with a decision on that left up to McKinnis’ family, the sheriff said.

At the time of the crash, McKinnis was employed at the SolarReserve Crescent Dunes solar plant near Tonopah, Wehrly said.

The Nevada Highway Patrol on Thursday night released the names of the three people killed in a head-on crash between a pickup truck and SUV on U.S. Highway 95 between Tonopah and Goldfield on Wednesday.

The NHP identifies them as:

The names of three others, injured in the crash, have not been released.

The crash occurred about 2:16 p.m. about 10 miles south of Tonopah.

The pickup’s driver and the driver and a front-end passenger in the Mitsubishi died, the NHP said.

Two passengers in the pickup were transported by medical helicopter to a Las Vegas hospital with serious, but non-life-threatening injuries, the NHP said.

A third passenger in the pickup was treated and released on scene with minor injuries. Other than McKinnis, no other names were immediately released, pending notification of family.

Everyone was wearing seat belts, the highway patrol said.

Just prior to the crash, the pickup pulling a trailer was traveling northbound on U.S. 95 south, and the Mitsubishi SUV was traveling south. Traffic was rerouted around the crash scene into the evening.

Those with information, including any witnesses, are asked to contact Trooper Karen Garretson of the Multi-Disciplinary Investigation and Reconstruction Team at 775-688-2500 or kgarretson@dps.state.nv.us The case is #161202850.

Funeral arrangements had not been announced late Wednesday.