Charlotte Uyeno/Pahrump Valley Times This file photo shows a sparkling explosion over Petrack Park, where the town of Pahrump will be holding its 50th Annual Fireworks Show this July 4. 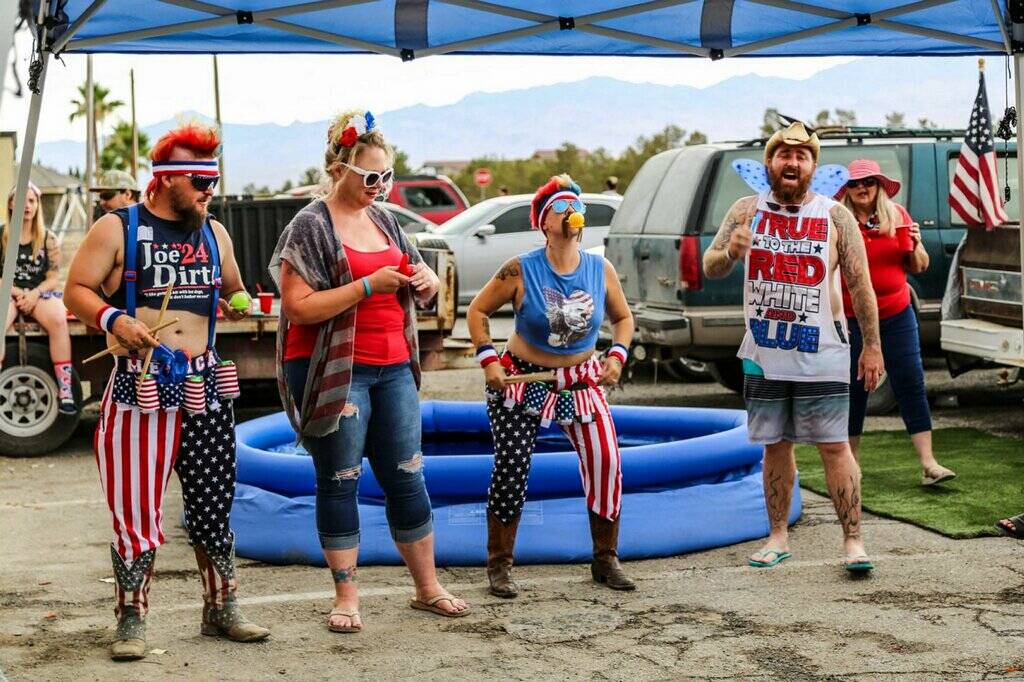 Special to the Pahrump Valley Times Revelers really get into the spirit at the Bearded Lady Fourth of July Redneck Pool Party at the bearded Lady Saloon, 1330 5th St. 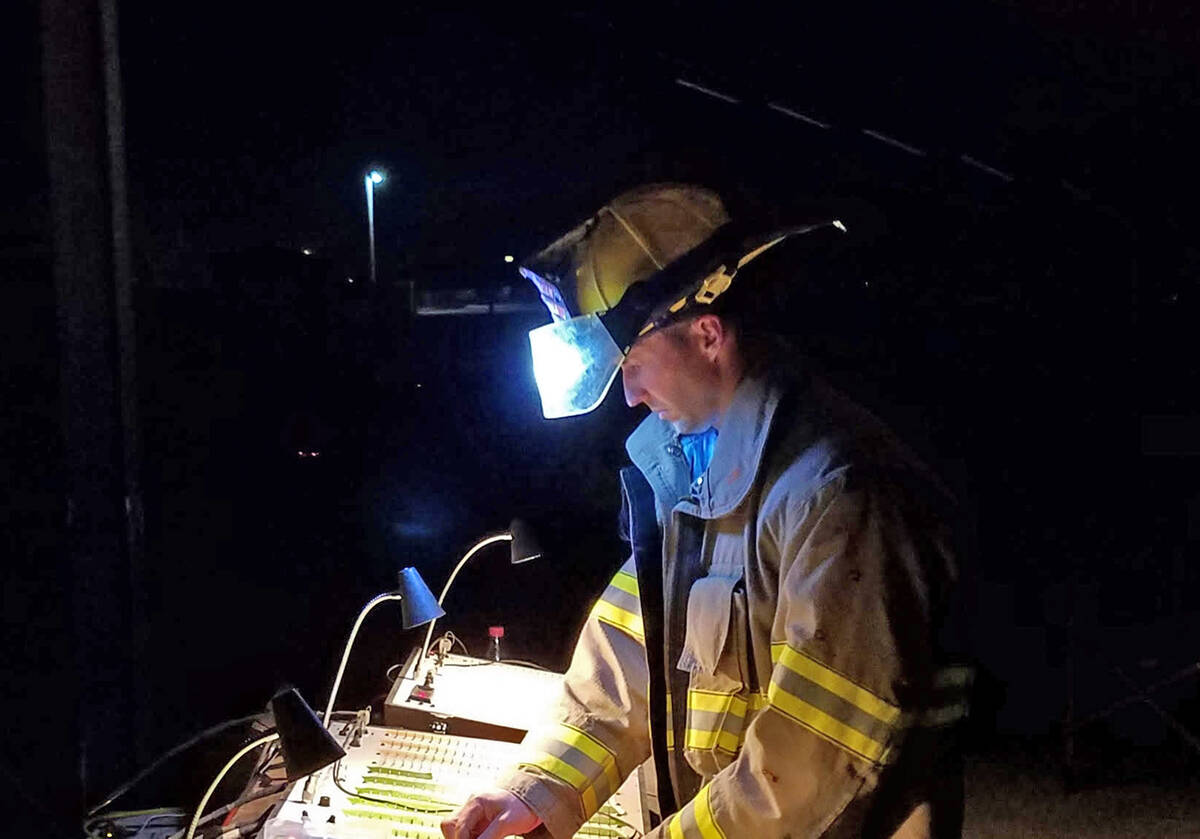 Special to the Pahrump Valley Times Zambelli Fireworks Pyrotechnician Eddie O'Brien is pictured in front of the electronic firing board used for the town's annual Fireworks Show. 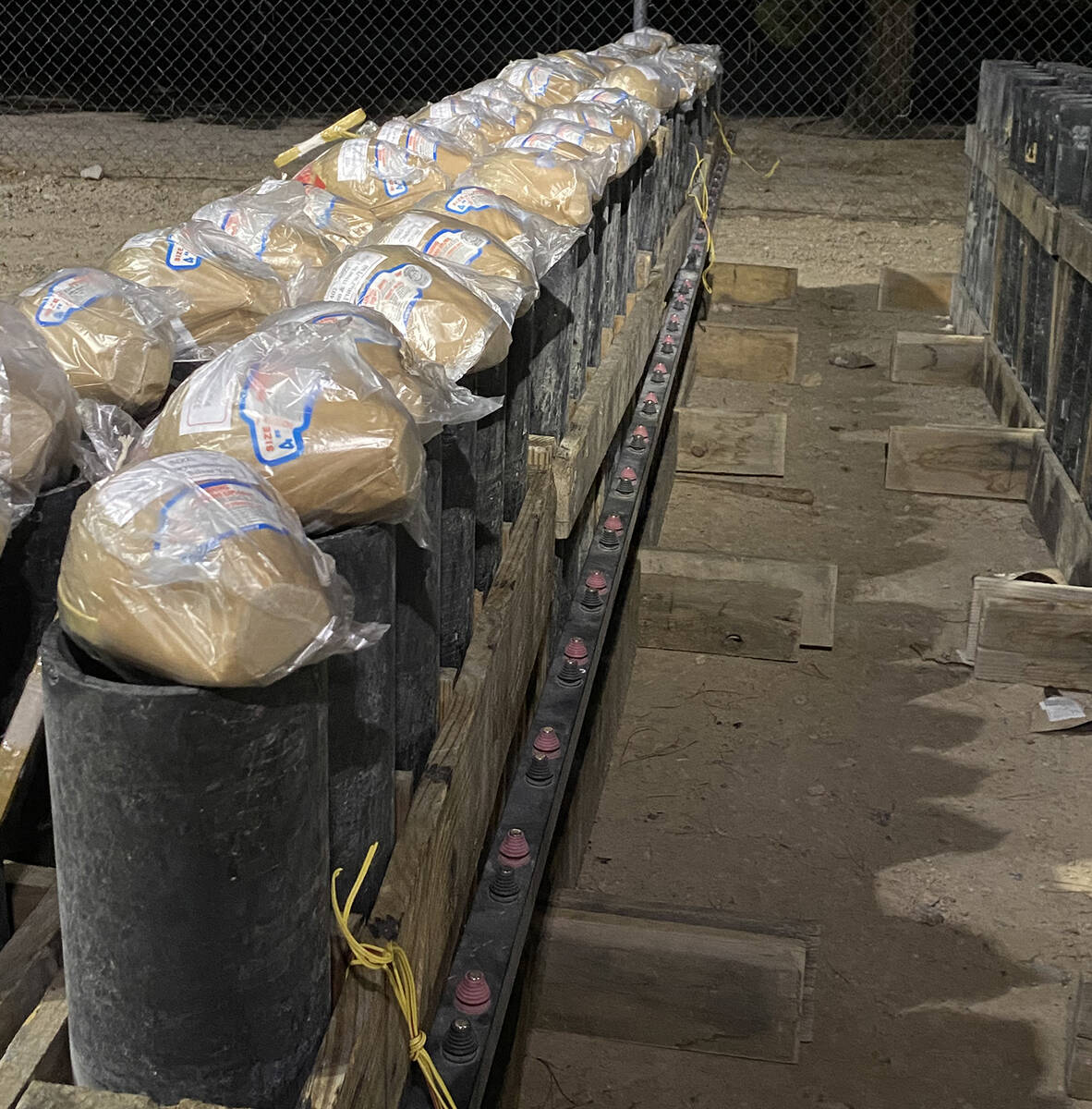 Special to the Pahrump Valley Times Preparing the shells for the town's Fourth of July Fireworks Show is no small feat and Zambelli Fireworks spends plenty of time ensuring everything is safe and ready each year.

Monday marks a full five decades since the town of Pahrump began entertaining visitors and residents with its annual Fourth of July Fireworks Show and with the special anniversary looming, event organizers have brainstormed a few ways to make the 50th annual fireworks show something truly special.

“This year marks the 50th anniversary of the Fourth of July fireworks celebration in Pahrump. Zambelli (Fireworks Co.) always does a fantastic job with the show, people even drive from Vegas and other parts of the state to see it. I expect that their team will have a few surprises for us on Monday,” Nye County and town of Pahrump Manager Tim Sutton told the Pahrump Valley Times this week.

“Everything is going smoothly, as planned, even though we have had a harder time trying to get products ordered out, considering the cost of everything has gone up,” Eddie O’Brien said when asked how preparations for the 2022 show were proceeding.

O’Brien is a pyrotechnician with Zambelli Fireworks, the company that has for many years been contracted by the town of Pahrump to provide the fireworks show. “But we’ve done the best we can to make sure this show is going to be really great,” he remarked.

Every July is a challenge for the Zambelli team to outdo its previous performances and yet the company seems to be able to achieve that goal year after year.

For the 50th anniversary show, O’Brien said his father and uncle have been traveling back and forth between Pahrump and California, as well as Pennsylvania, to secure the products needed. Going one step further, the two have hand-picked each and every shell to be used.

“The community is going to see a lot of different variations that they haven’t seen, either in a long time or ever before. We’ll have both 3- and 4-inch shells along with some low-level devices that the crowd should love,” O’Brien detailed.

He noted that this year saw some additional funding allocated for the show, too, thanks to the efforts of town staffers Jimmy Martinez and Courtney Kenney. “They secured an additional $15,000 for this show, which is really cool. They wanted to do that because this year is the 50th anniversary of the show and they wanted to see about making it even bigger and better.”

Aside from the fireworks themselves, the Zambelli team has been hard at work putting together a playlist of music to accompany the glittering explosions. The music will be streamed in Petrack Park from speakers at the rodeo grounds and for those who will be watching from the vehicles, it will also be simulcast thanks to a partnership between Zambelli and 103.1 KACE Country Radio.

The contracted run time for the show is 22 1/2 minutes but O’Brien noted that Zambelli will definitely be exceeding that, as the company always does. To help boost the excitement of the grand finale, the O’Brien family has even contributed their own funds and everyone is anticipating a fabulous display of patriotic pyrotechnics.

“We always like to keep to that tradition of celebrating Independence Day on July 4 so we’ll be doing the show that Monday night. And we really encourage people to come and see it in the park, where you can feel the effects of the show. It should be great!” O’Brien said.

Sutton added, “John Dickinson, one of our Founding Fathers said, ‘Then join hand in hand, brave Americans all! By uniting we stand, by dividing we fall.’ Despite some of the division happening in our country right now, I hope we can all come together on the Fourth, enjoy watching a great fireworks show, and celebrate our country, faith, freedom, and family.”

The town of Pahrump’s 50th Annual Fireworks Show will take place Monday, July 4 at Petrack Park, located at the corner of Highway 160 and Basin Avenue. The first shells are set to light up the sky at 9 p.m. that evening.

Here’s a look at other holiday events planned around the area.

Live music festival at the Nugget

Nye County Valor Quilters, G.I.USA, and DAV Chapter 15 will all be at the Pahrump Valley Winery Saturday, from 11 a.m.-4 p.m. on July 2 to celebrate America’s birthday. They will showcase their organizations, offer crafts and merchandise for sale, and, in the case of the Disabled American Veterans Chapter 15, explain the benefits of membership. Pahrump Valley Winery will host a BBQ — there will be hamburgers, hot dogs, wine and beer for sale. They will also offer a wine-tasting station. No outside food or drink. Pahrump Winery is located at 3810 Winery Road. Call Cindy at G.I.USA for more information, 775-513-7777.

Independence Weekend Redneck Pool Party: “You ain’t been to a redneck party till you’ve been to a Bearded Lady Fourth of July Redneck Pool Party,” says Kelli Sater, owner of Bearded Lady Saloon. Bring your trucks and line them with tarps by 11 a.m. and get in on the redneck pool action. “Most Redneck Truck” wins $100. “Don’t cut them mullets, grow them out and enter our Magnificent Mullet contest,” Sater says. The winner gets a trophy and free redneck photo shoot at The Bearded Lady.

Free burgers and hot dogs on the grill. Live entertainment by Jeffrey Michaels on the outdoor stage. Play redneck games and win fun prizes and bragging rights with your friends. For more information, contact the the Bearded Lady Saloon, 1330 5th St. 775-764-9377.

Pahrump fireworks: A Fourth of July celebration will be held from 10 a.m. to 4 p.m. in the Calvada Eye featuring a water balloon fight, three-legged race, pie-eating contest and more, cornhole games and more. A parade kicks off there at 10:30 a.m. Zambelli Fireworks Co. will put on the fireworks show beginning at dusk on Independence Day from Petrack Park.

Beatty fireworks: Come Celebrate an old fashioned Fourth of July at Cottonwood Park. The day includes a watermelon-eating contest, egg toss, three-legged race, sack race, a wheelbarrow race and concludes with a spectacular fireworks display at dark.Bring your own chairs and shade. For information, 775-553-2050.

Tonopah fireworks: A “kiddy parade” begins at 9:30 a.m. through town; followed by a flag raising at 10:30 a.m. at the vacant lot next to VFW Post#1103. Music and field events begin at 5 p.m. at the Joe Friel Sports complex, followed by a watermelon-eating contest around 6 p.m. Fireworks will be launched from the Tonopah Volunteer Fire Department at approximately 9 p.m

Cocktails and canvas with fireworks

Get out of the heat and enjoy painting everybody’s favorite boy and his dog while they watch fireworks over a sunset lake from 1-4 p.m. at the Pahrump Senior Center, 1370 W. Basin Ave.; $25 includes all supplies and instruction. Bring your favorite beverage.