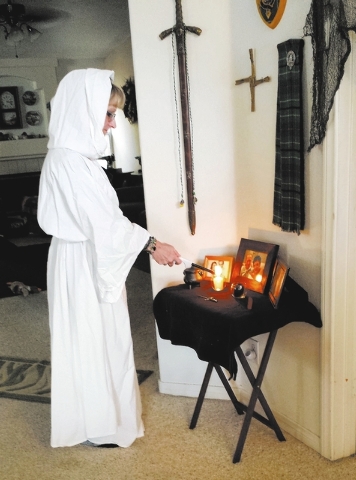 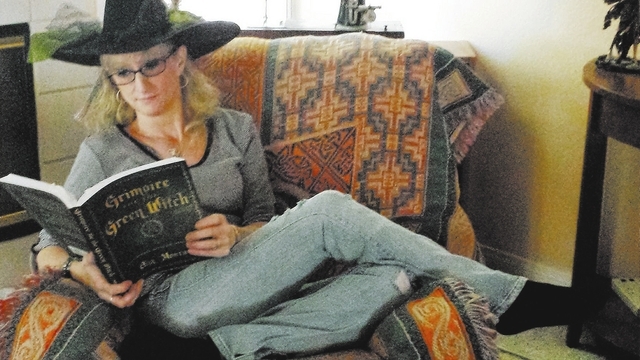 Janie is a witch. She takes her religion, Wicca, very seriously and has agreed to talk with the Pahrump Valley Times during this Halloween season to dispel some myths about her beliefs in hopes of giving people a better understanding of what witchcraft is and what it is not. Janie agreed to this Q&A as long as we did not reveal her last name. She asked me to use her witch name, Saeden. She has been a witch for the past six years of her life and practices Wicca with her husband. The two live in Las Vegas.

The interest in magic, the paranormal and witchcraft has risen greatly since movies like Harry Potter came out. Over the years the line between truth and fiction has become blurred.

Q: What is Wicca and what is a witch? Are the two interchangeable?

A: I am Wiccan. The word derives from the Old English word for witch, wicce. All it means in Latin is the wise one.

Wicca is the commonly used name for our religion. Witchcraft itself are the tools. You can talk to 10 different Wiccans and they will give you a different definition. You can talk to different witches and they will say, “No, I am not Wiccan. The Wiccan path is more structured. I am a witch. What makes a witch? I believe in magic and use the tools to practice my belief. So Wicca is the religion and witchcraft is the craft — tools you used to practice magic.

Q: Does magic really exist and what is it?

A: Magic is using the energy around you to create a result. We all have magic within us. Even as a kid I did magic and did not realize it. I did not want to go to school, so I said I was going to get sick and I did. I put that on myself. That is a form of magic.

Q: How is it used and when can one use magic?

A: With magic comes responsibility. All magic is the way of manipulating the energy around you. It is a way of putting your intent out to the universe, but you have to be careful of what you practice. We have something called the three-fold law. It is similar to the golden rule, and states what you put out will return to you three-fold whether it be bad or good. It states that whatever energy a person puts out into the world, be it positive or negative, will be returned to that person three times. Some subscribe to a variant of this law in which return is not necessarily three-fold.

Q: When can you do magic?

A: As long as it harms nobody, you can do your spells. You can’t do anything that will violate somebody’s free will. People ask witches to cast spells on people to fall in love with them. That is wrong because you are doing something that violates free will. I have had people ask me to help them with applying to a new job. Think of spells as being like prayer. That is really all it is. When you pray you are putting yourself out to the universe. In a spell, we use tools. We can burn a certain incense. We can use certain crystals, which put out energy. Certain herbs have properties. So, when you use these things they are just tools to give your prayer a little umph.

Q: In the movies you always see witches flying on brooms. Why do people think witches can fly?

A: Brooms are used in ritual and it is used to clean a sacred space. One of the origins of witches flying comes from witches jumping around their crops. They would try to jump as high as they could to show the corn how high they could grow. They would jump in the air to show how high to grow. They would use hallucinogenic drugs while doing this and they would feel like they were flying.

Q: What role do animals play in wicca?

A: We believe in animal spirit guides. Wicca is an Earth-based religion. We worship nature. There is divinity in everything. Animals are gifts to us. Everyone has a different paths. Some pagans have a pantheon of gods or goddesses which they worship. I call mine my Lord and Lady. I have not named them. They are a divine source. I believe animals are gifts to us from my god and goddess. Animals have a certain attributes. The horse symbolizes stamina, speed and strength. Dogs symbolize companionship and loyalty. Gods will speak to us through animals.

Q: The black cauldron is a symbol of witches. Where did that come from?

A: The cauldron is a goddess symbol and signifies the womb or great mother. We do our cooking in cauldrons. They are used to put spells together. Many of the stuff that goes into spells like eye of newt can be nicknames for herbs. Hollywood sensationalizes that.

Q: Why do people associate black magic and witchcraft with Satan?

A: Satan is a Christian concept and pagans do not believe in Satan. Our gods and goddesses can be good and evil. For instance, to the Greeks Athena was the goddess of war and she was also the goddess of wisdom. Witches being satanic is a myth.

Q: Where did the pointy hat come from and do you really wear them?

A: Christianity wanted to scare people. If witches were ugly it would deter people from using it. The pointy hat goes back to the medieval ages. It was used as a dunce cap and the Jews were persecuted and were labeled as witches. The Jews were shamed by putting a pointed hat on them and they were also accused of witchcraft. So the pointed hat became a symbol of witchcraft through the persecution of Jews. Now-a-days we take pride in it. It is our badge of honor to wear one. It is a symbol of pride.

Q: Why is Halloween sacred to witches and is often portrayed as a night of blood sacrifices? Is that true?

A: It’s a sacred day for Wiccans. It is a day to honor my ancestors. It literally is the witches’ new year. It is like New Year’s Day. It is used to celebrate new beginnings and you can communicate with ancestors.

It’s a two-fold thing. I have an altar set up for my ancestors. You can write down anything you want to change in the New Year and put it in the cauldron and burn it. The blood sacrifices come from movies and are a myth.

Q: What are the origins of Halloween?

A: There are so many similarities between Catholicism and Wicca. Some say Catholicism is Paganism with a crucifix. When they converted pagans, the Catholics adopted many pagan practices.

The Catholic had All Souls Day on May 13 and it was Pope Gregory, in an attempt to convert the Pagans, who moved it to Nov. 1. Halloween was All Hallows Eve, hallow being sacred. Nov. 1 was All Saints Day, so All Hallows Eve became Halloween. It was a pretty tricky move to attract the pagans.

They had to put on masks to scare away the evil spirits. They believed the veil between the living and the dead to be very thin. They tried to fool them. A lot of the tradition came from Irish and Scottish. They really did not celebrate Halloween until the Irish came over to America.

Dressing up in costumes was banned in a lot of cities because the boys would go out and create a lot of havoc. It toned down quite a bit.