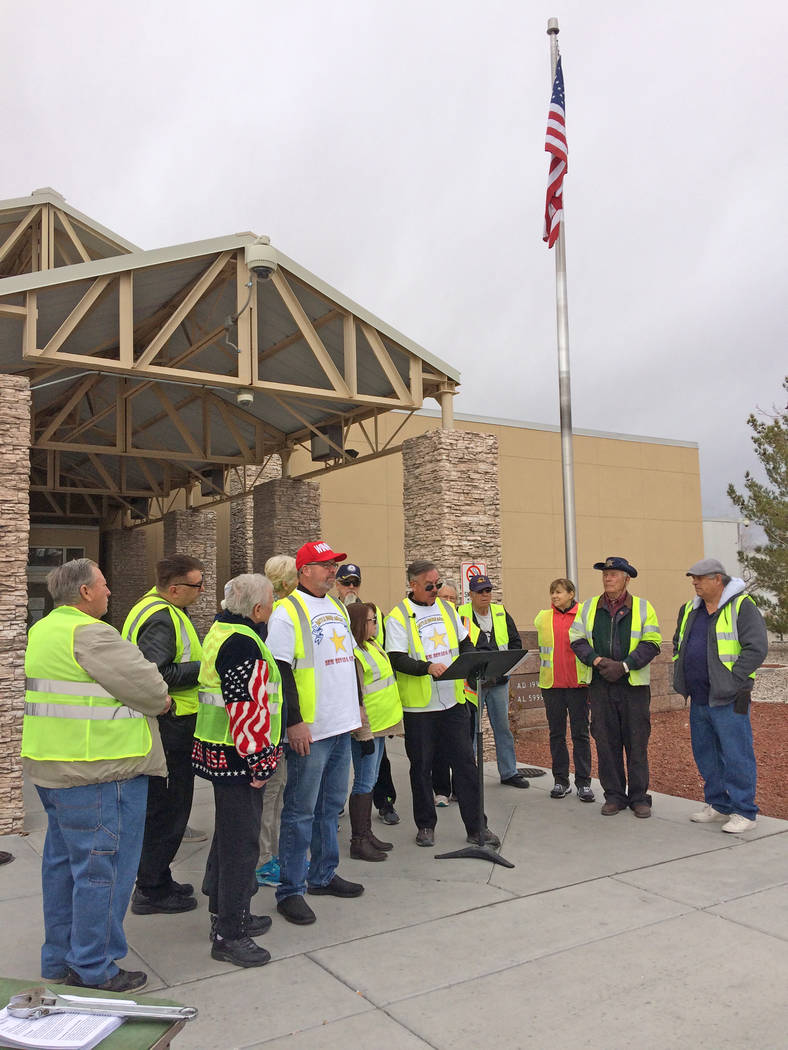 Robin Hebrock/Pahrump Valley Times New Nevada State Movement chairman Robert Thomas III reads the Declaration of Independence from the State of Nevada on Jan. 21 while surrounded by supporters. All were sporting "yellow vests" in the name of liberty, taking a leaf out of the book of protesters in France who have recently been demanding economic justice. 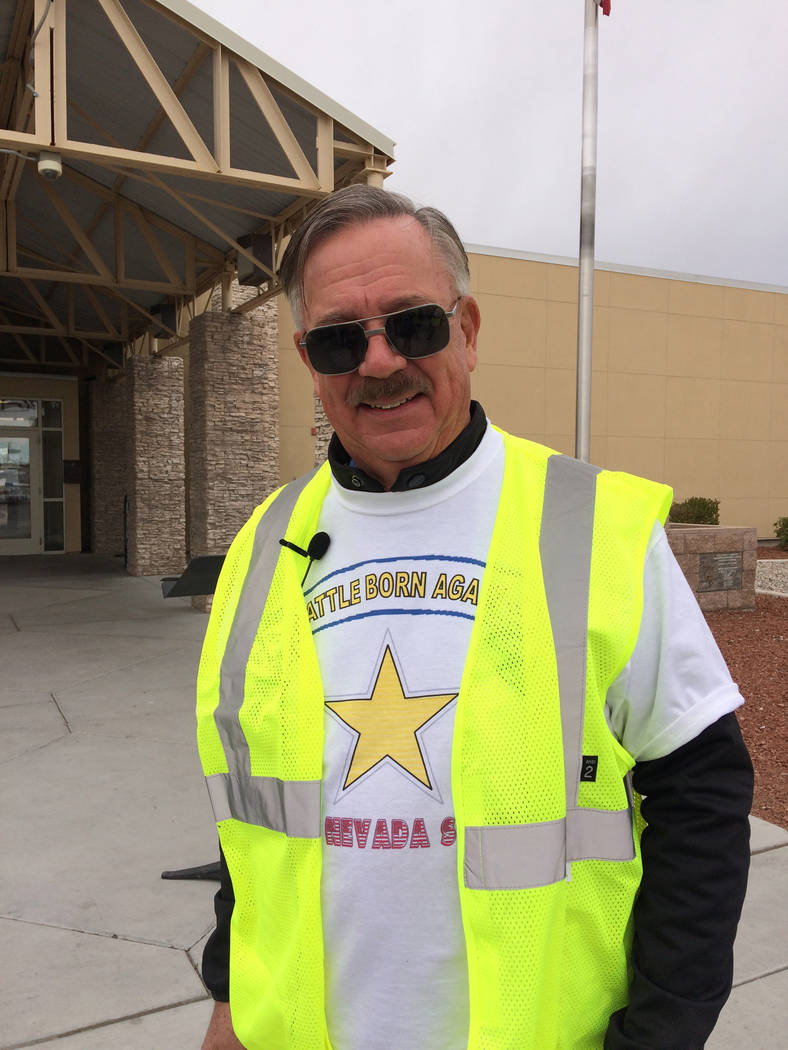 With frustration and divisiveness among the American populous a growing trend, some have decided the time for discontented grumbling has come to an end and action must be taken.

A new movement has been born with the goal of dividing certain states in the nation and Nevadans are now taking up the concept, forming what has been titled the “New Nevada State Movement.”

The objective is fairly straightforward; sever rural Nevada, which is primarily Republican, from the major metropolitan areas of the state that are predominantly Democratic, to form “New Nevada” and therefore, according to group founders, free rural areas from the oppression of “mob rule.”

In Nye County, a New Nevada State Movement committee was formed on Jan. 16 and it is already hard at work, trying to get the word out and gather support for its mission.

In a news release, committee chairman Robert Thomas III explained, “The court decision, Reynolds v. Sims, mandated that state senators be elected by population. This decision created what our Founding Fathers feared; a tyranny of the majority (‘mob rule’). Now, large population centers out-vote all the rest of rural Nevada with distressing regularity. That injustice can be corrected by the formation of a New Nevada State.”

The release goes on to state the group’s belief that the interests and values of rural Nevadans differ greatly from those who reside in large cities. It further asserts that advances for the urban areas often come at the expense of the remainder of the population.

To help generate interest in the New Nevada State Movement, the group hosted a “Declaration Day Rally” in front of the Nye County Courthouse on Jan. 21. There, a Declaration of Independence was read, outlining the intent to have rural counties secede from Nevada and form a brand new state, with its own government, which would be controlled by the vote of the rural people.

“We affirm the legislative function of government at all levels is to safeguard life, to protect and guarantee liberty, and to maximize those conditions that allow the citizenry to responsibly pursue happiness as each individual sees fit, all within the government’s restrained exercise of those powers delegated to it by the People,” the declaration reads in part. “However, whenever any government becomes destructive of these legitimate ends, it is the right and duty of the People to alter or to abolish this destructive government and to institute new government…”

The declaration, a three-page document, outlined the group’s belief that the existing government in the Silver State no longer represents the will of many voters, citing such actions as the Commerce Tax as evidence. With a Democratic governor now in office and a Legislature controlled by that side of the aisle, the group also detailed its frustration with potential actions by that body.

“The stated purpose of the newly-elected governor of Nevada and others of his party – now Nevada’s majority and tyrannical party – is to enact laws that violate their oaths to ‘support and defend the Constitution of the United States’, These threatened enactments include, but are not limited to, (1) the creation of a ‘sanctuary state’, (2) the restriction of our inalienable rights under the Second Amendment… and (3) the imposition of more and higher taxes. They fail to acknowledge that, ‘the power to tax is the power to destroy,’” the document states.

With all of these grievances in mind, the New Nevada State Movement will be actively pursuing the process to turn the state’s rural counties into “New Nevada.”

While some may take the news with a grain of salt, committee members assured that the process they are following is tried and true, having been used before. For example, Virginia was once a single state but it is now divided into Virginia and West Virginia, the release remarked. Maine is also an example, with that state having been formed out of land that once belonged to Massachusetts. Today, there are similar movements in both California and Illinois and other states appear to be making moves toward such action as well.

To reach its goal, the New Nevada State Movement will be seeking 501( c )4 status to allow it to receive non-tax-deductible donations to fund the movement. Forming committees in counties throughout the state is another key step and these will eventually elect provisional senators and assemblymen for each. The county committees will then come together to host one or more constitutional conventions to draft a constitution and New Nevada State Revised Statutes.

“In doing so, we will demonstrate to all we are ready, willing and able to govern ourselves far better than the politicians of the current state of Nevada do,” the release states.