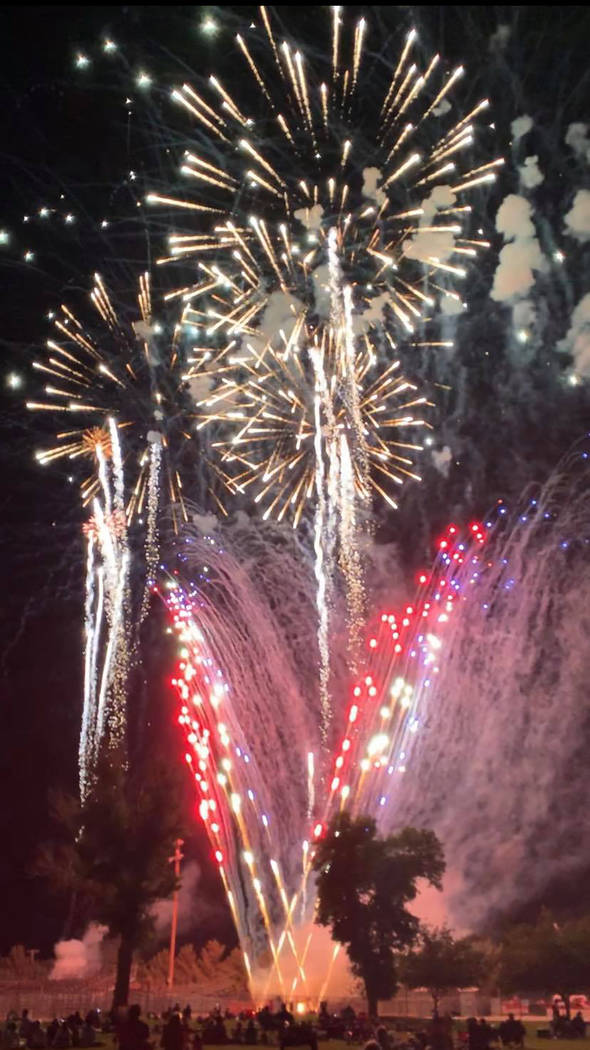 Ryan Muccio/Special to the Pahrump Valley Times The town of Pahrump's annual Fireworks Show lit up the night sky over Petrack Park for nearly 30 minutes on July 4. 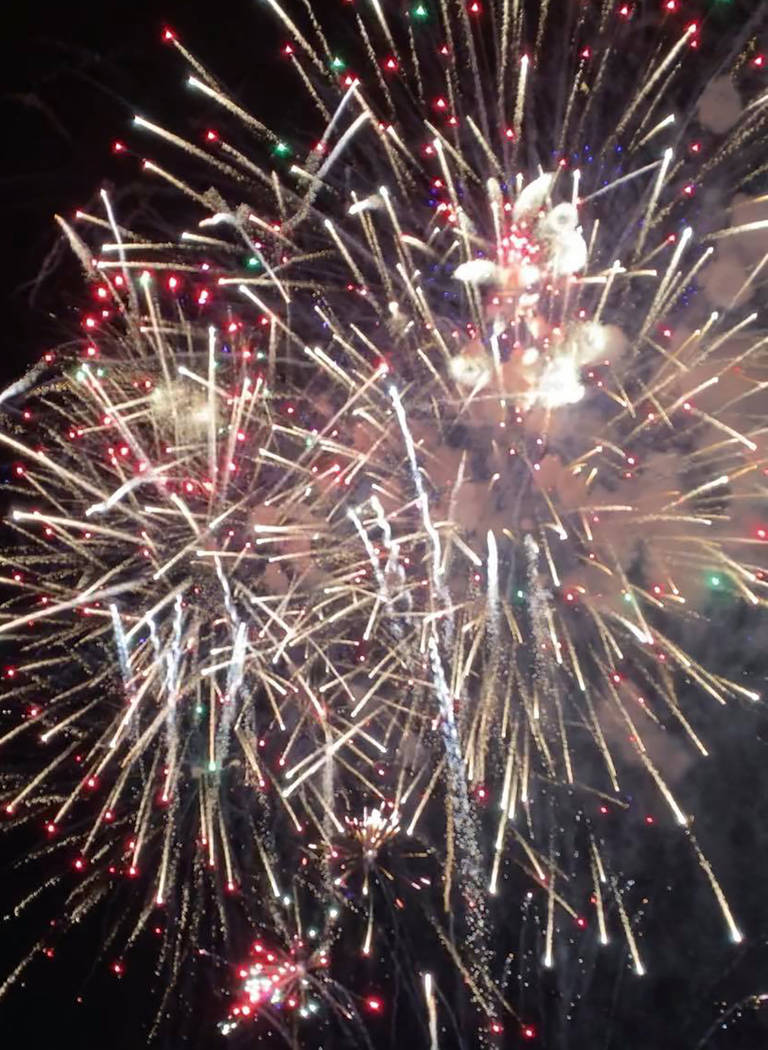 Ryan Muccio/Special to the Pahrump Valley Times Bright burst of light and the crackle of sparks elicited gasps of excitement and plenty of "oohs" and "ahhs" during the Pahrump Fireworks Show. 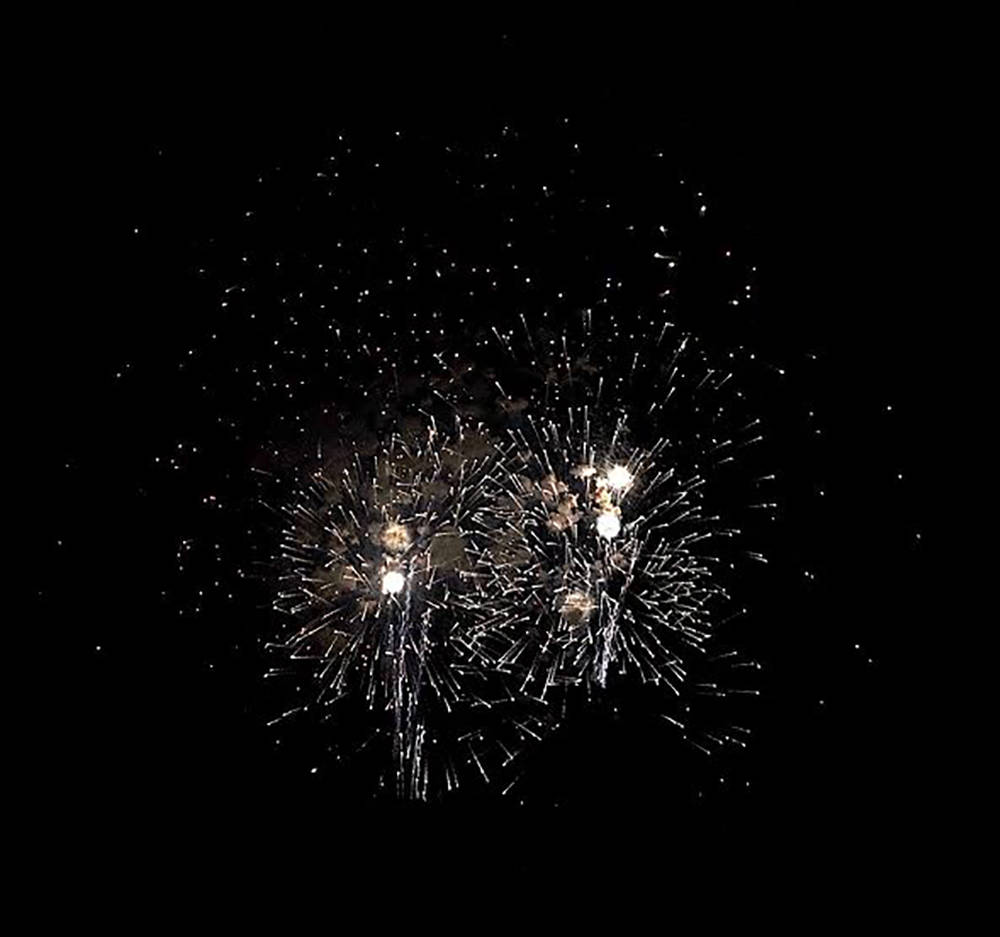 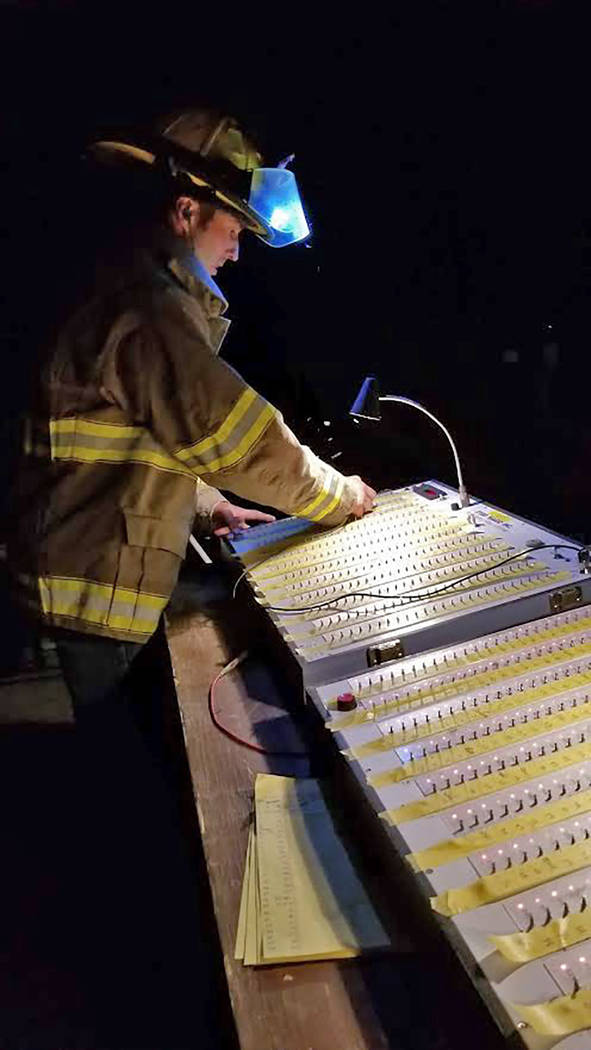 Deanna O'Brien/Special to the Pahrump Valley Times Zambelli Fireworks pyrotechnician Eddie O'Brien is pictured running the electronic firing system he uses each year to put on the Pahrump Fireworks Show.

Residents and visitors of the Pahrump Valley were treated to a very exciting and dazzling spectacle in celebration of Independence Day, with the loud booming and bright sparkle of pyrotechnics filling the dark skies during the town of Pahrump’s annual fireworks show.

Hosted the night of July 4th at Petrack Park, the event once again attracted an enormous crowd as cars packed all surrounding parking lots and the grassy fields of the park filled to the brim with spectators.

The team of Zambelli Fireworks worked hard for months beforehand planning the display and then spent many hours just before the Fourth of July readying to put on the illuminating presentation. The hard work paid off as the team provided what has been hailed as yet another phenomenal show, with town and county officials and the public at large raving about the result.

“I attended the fireworks show on the Fourth of July with my wife and friends, it was absolutely awesome. Thanks to Zambelli Fireworks for another great show!” John Koenig, Nye County Commission chairman and a member of the governing body for the town of Pahrump, said following the event.

“On behalf of Zambelli and the O’Brien family would like to thank the town of Pahrump and personally Vern Van Winkle (of KACE Radio) and his team for sponsoring the show,” Zambelli representative and show technician Eddie O’Brien told the Pahrump Valley Times. “It was a very large show with a total of 2,284-plus aerial shells and 7,700 total devices shot off. The duration of the choreographed show was 29 minutes with a three-minute finale. A total of 1,362 aerial shells were launched in the finale alone.”

O’Brien noted that contrary to rumors circulating, the Pahrump Nugget did not contribute to the fireworks show at Petrack Park, which was a collaboration between the town, Zambelli Fireworks and KACE Radio.

The show came at a cost of approximately $26,000 to the town of Pahrump, paid for out of the room tax charged on hotel stays in the valley. In addition, O’Brien said his family donated an additional 25 percent of this amount in products to help ensure the show was as big and amazing as possible.

“We are well known for our finale,” O’Brien detailed. “It personally took me six hours just to set the shell strings out for that. This year’s show took five days to set up. Thankfully, Matt Luis (Pahrump buildings and grounds director) gave us access to the grounds an extra day, which was great considering the size of the show.”

It’s no small task putting together this scale of a fireworks display each year, either. O’Brien explained that it took him the entirety of eight months to create the image in his mind of exactly how he wanted the show to look and how the music would tie into the display. “My dad, John, even though he had a show in Laughlin, played a huge role in putting the timing of the music together as well as securing all the permitting before he left,” O’Brien said.

Even after bringing together all the aspects of the show design the work is not finished and that is when the tension starts to set in, O’Brien stated. “The amount of pressure is unreal when you have to think about every aspect of what you just did versus what could go wrong in different scenarios as well as the safety of the crew and crowd. Everything is running through your mind with the timing and music, the chance of catastrophic failures. It builds up until after it’s all done.”

When all was said and done, however, there were no major hitches in the display and O’Brien said he felt it was extremely successful and very well received by attendees.

“You saw things this year that Pahrump has not seen for about 11 years,” O’Brien said, adding, “Also a big thanks to our crew, I could not have done it without them, Rick Goldstein and his family. They put in a lot of hours watching after the site.”