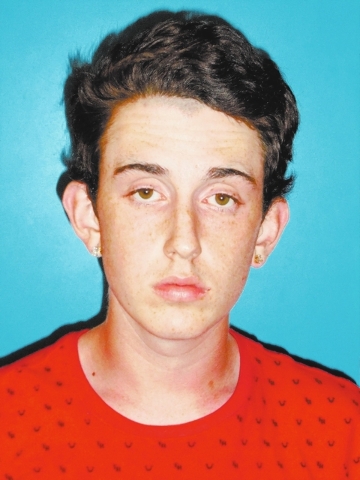 Another suspect was identified and arrested connected to the alleged attempted sale of stolen firearms incident by two juveniles last weekend.

Jacob Valine, 18, Pahrump, was taken into custody Tuesday after the Nye County Sheriff’s Office was investigating the death of a 17-year-old unrelated to this case, and interviewed Valine. The investigation revealed that Valine had close knowledge of the alleged stolen firearms in question with the two juveniles and that he was involved with trafficking narcotics.

Valine was placed under arrest and his residence located on the 1000 block of E. Gamebird Road was searched by the Scorpion Task Force.

The search resulted in the NCSO seizing a firearm, trafficking amounts of cocaine, ecstasy and marijuana. During the search it was also revealed that Valine shared the residence with his underage girlfriend.

The ongoing investigation also revealed that the two juvenile suspects and the seized firearms are connected to a larger case which involved the theft of a large amount of weapons from a Pahrump residence in 2015.

The situation began when a woman called the sheriff’s office to alert them that two male juveniles, one 16-years-old and the other 17-years-old, were on the way to her residence to sell her the alleged stolen guns.

When NCSO deputies were en route to the home on the 4000 block of Savoy Boulevard, they were told the two suspects were in the home conducting the sale.

Upon arriving at the residence, deputies made contact with the reporting resident as well as the two suspects. The 17-year-old fled the scene, leaving his car behind.

Patrol units set up a perimeter but the 17-year-old was able to elude police, while the 16-year-old was apprehended in the driveway of the residence.

A patrol sergeant allegedly witnessed the 16-year-old toss a small paper box into the bushes, which was found to contain narcotics.

The 16-year-old was taken into custody and charged with preliminary counts of possession/sale/transfer of a stolen firearm, possession of a dangerous drug without prescription, conceal evidence and obstruction.

During the initial investigation, NCSO detectives realized that the suspect’s vehicle had fictitious plates on it and the vehicle was impounded for improper registration and searched for impound inventory. During the inventory, detectives found one stolen firearm and two other stripped firearms. Detectives later found that the three firearms were arranged to be sold for $400.

The 17-year-old who escaped the from the scene, turned himself in on Monday at the Nye County Sheriff’s Office. He was placed under arrest and charged with preliminary counts of possess/sale/transfer stolen firearm and operating a vehicle with fictitious license plates.

This investigation is ongoing. Anyone with information regarding this case is urged to contact detectives at 775-751-7000 or anonymously by email at ncso_detectives@co.nye.nv.us.