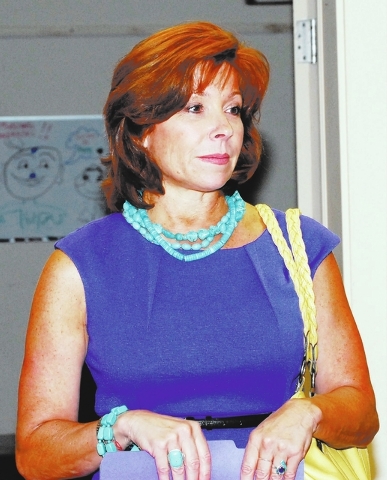 Thompson reminded the newly-created committee the AFL-CIO introduced a bill in the 2013 state legislative session that would have put VEA under the jurisdiction of the Nevada Public Utilities Commission if it operated outside its service territory. That came after VEA signed a contract with the federal government to operate the Creech Air Force Base distribution system and provide electrical service to the Nevada National Security Site. The bill passed both houses of the Legislature only to be vetoed by Gov. Brian Sandoval.

Thompson spoke under public comment after a presentation by VEA Executive Vice-President of Government Relations and Marketing Susan Fisher, who spoke about how the cooperative is regulated by its members, who are both customers and owners. She said VEA is also regulated in part by the PUC, the California Public Utilities Commission, the Western Electric Coordinating Council, North American Reliability Corporation and Federal Electrical Regulatory Commission.

“All of our members are stockholders. We don’t actually issue stock, but they own the company. They are issued capital credits in the company and we reinvest those back into the company,” Fisher said.

Fisher said all cooperatives have in common voluntary and open membership, democratic member control, economic participation by the members, training and information, cooperation with other cooperatives and service to the community. She mentioned Operation Round Up, where customers round their bills to the next dollar and proceeds are given to a charitable foundation, along with the successful solar hot water heater program, where VEA provides the installation and sells the equipment at cost to members with no money down and zero percent interest.

Members of the VEA legislative committee were in attendance. Fisher said there’s also a Conservation and Renewable Energy Committee, a Finance Committee and a Bylaw Committee. But she didn’t detail comments at the end of her written presentation about government contracts, which she said increased business tremendously in the last couple of years and were secured through open, competitive bids.

“We introduced a bill that simply said if a co-op decided to operate outside their service territory they would come under the administration of the PUC,” he said. “After listening to the presentation today it is more evident. This is still a problem. The co-op in particular we are talking about is Valley Electric.”

Thompson complained VEA advertised for business on television stations and on billboards in Reno during the last legislative session.

“A regulated utility cannot compete against an unregulated utility. By their own admission they’re a utility. The mere fact this bill was vetoed does not negate the problem, the problem still exists and to me, representing 200,000 people in this state and probably the vast majority of our ratepayers, they are concerned with this,” he said.

Thompson told lawmakers if NV Energy continues to lose business they can’t recover from, it will be a problem their constituents have to deal with.

“Everybody agrees portfolio standards are expensive. Someone has to pay for that,” Thompson said.

He pointed to a previous case where a regulated phone company lost out to an unregulated cable company that was granted a contract at Nellis Air Force Base.

Thompson said, “There’s nothing to stop any co-op from deciding they want to do business at Nellis Air Force Base or anywhere else in Nevada.”

Earlier in the meeting, Tony Sanchez, NV Energy senior vice-president of government and community strategy, said they were the only union electric provider in the state. Clay Fitch, executive director of the Nevada Rural Electric Association, a group representing six power co-ops VEA broke off from, corrected him, saying some of their members, like Mount Wheeler Power and Wells Rural Electric, have union shops represented by the International Brotherhood of Electrical Workers. VEA is a non-union shop, and Chief Executive Officer Tom Husted has said his linemen are paid better than other companies for it.

Mary Langston, who said she was a long-time resident of Pahrump, complained the U.S. Department of Energy will pay less per kilowatt hour than ratepayers, which includes many people living on fixed incomes.

“Are we as ratepayers subsidizing the Department of Energy?” she asked. “Valley Electric has spent millions of dollars upgrading their facilities and lines to accommodate bringing on the government contracts. My question would be: If this is only a five-year contract with the Department of Energy are we as ratepayers going to be left holding the bag for all of the money Valley Electric would need to recover?”

She added the cooperative is supposed to be open for transparency but referred to a Pahrump Valley Times article that the press can be asked to leave a Valley Electric board meeting.

“While I understand in theory a co-op is supposed to have oversight by electing board members, it is clear in the case of Valley Electric, no one is minding the store and it’s just a matter of time before ratepayers like myself get left holding the bag,” she said.

In response, VEA said the added revenue from the federal contracts and new power purchase agreements will stave off any rate adjustments until 2018. The co-op said their proactive business strategy allowed them to survive in the recession and fueled growth that increased its workforce by 38 percent since 2010.