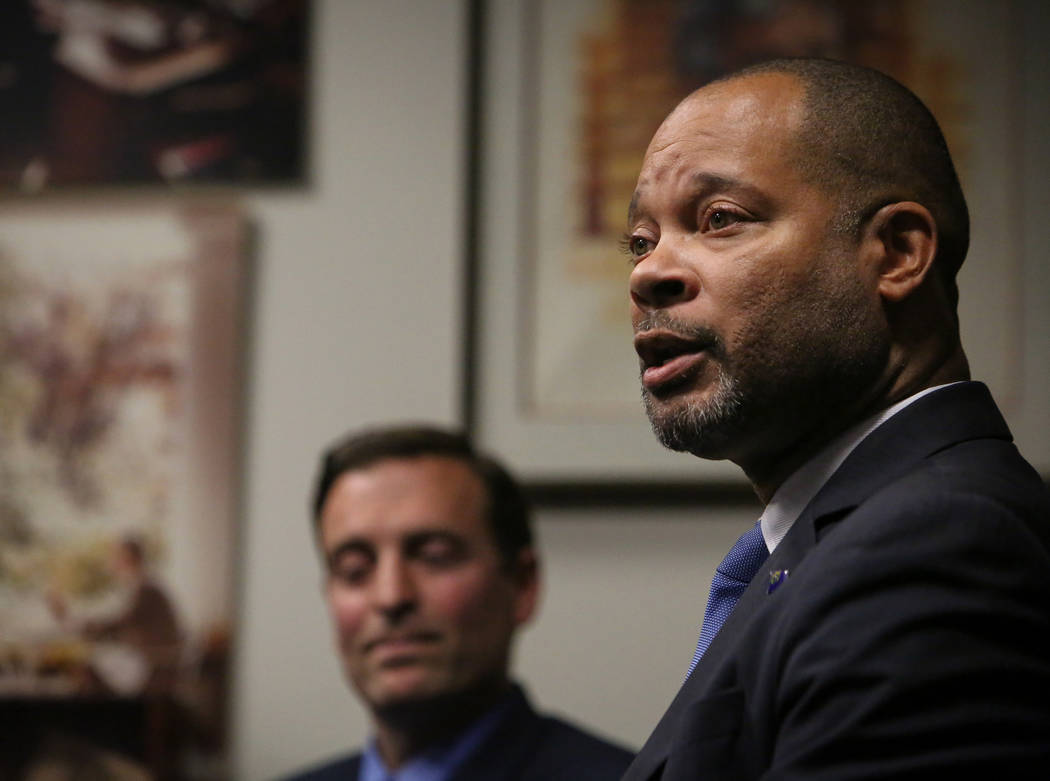 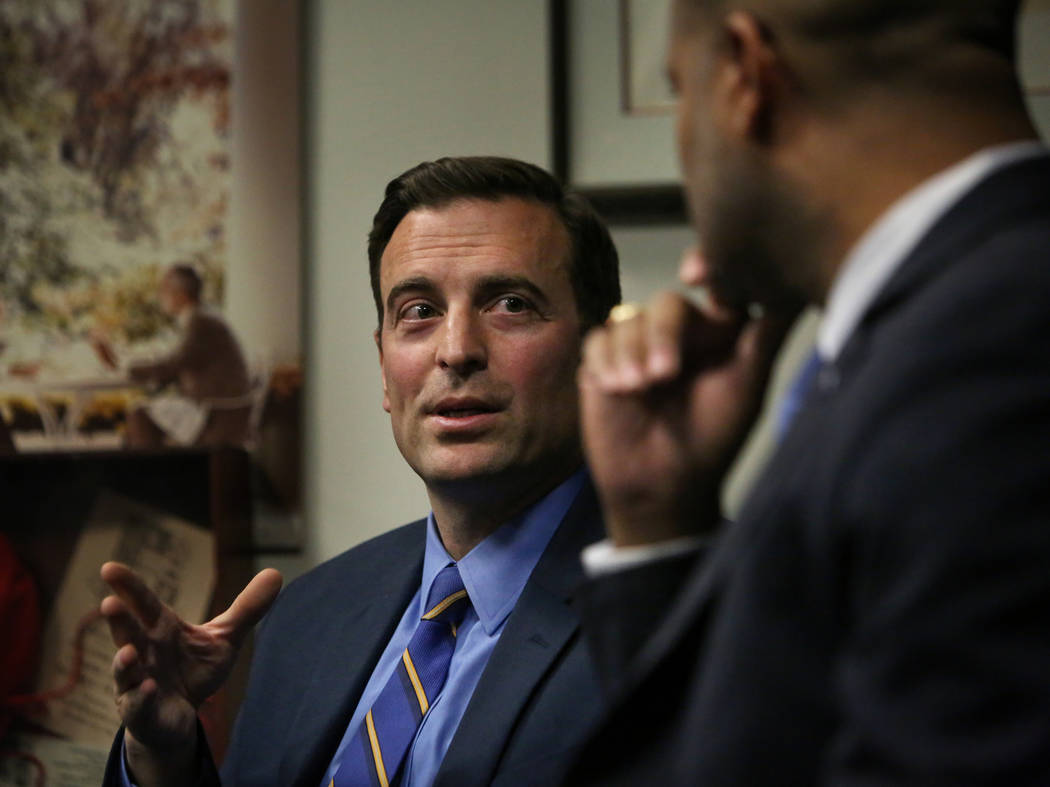 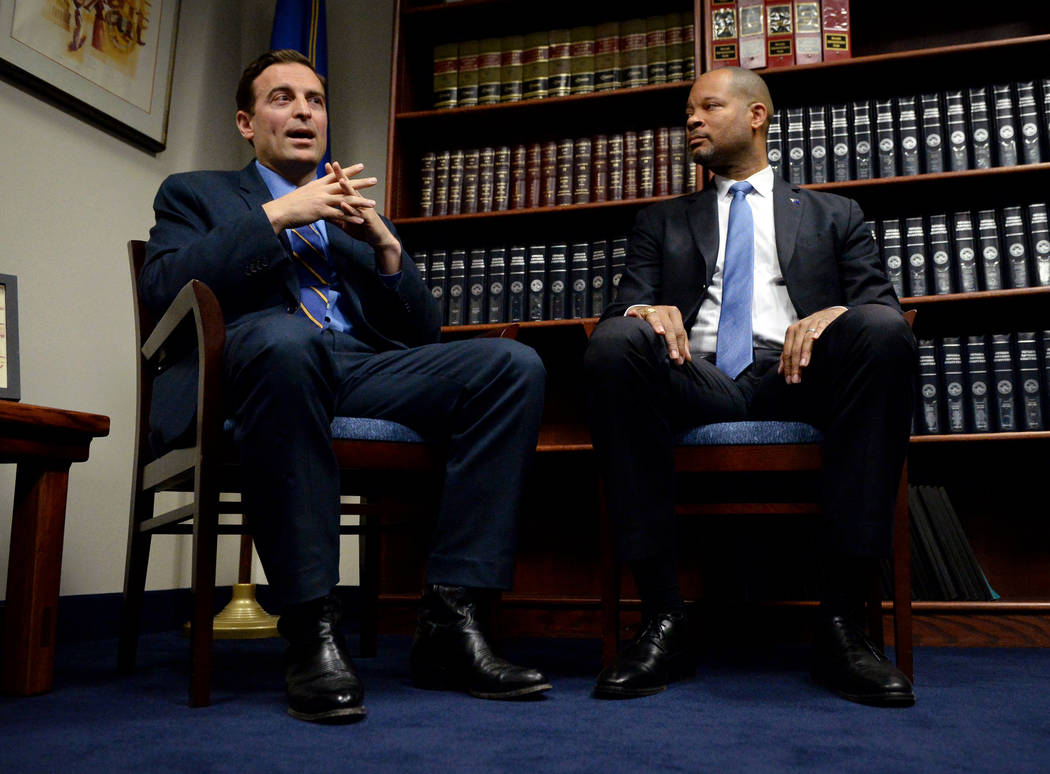 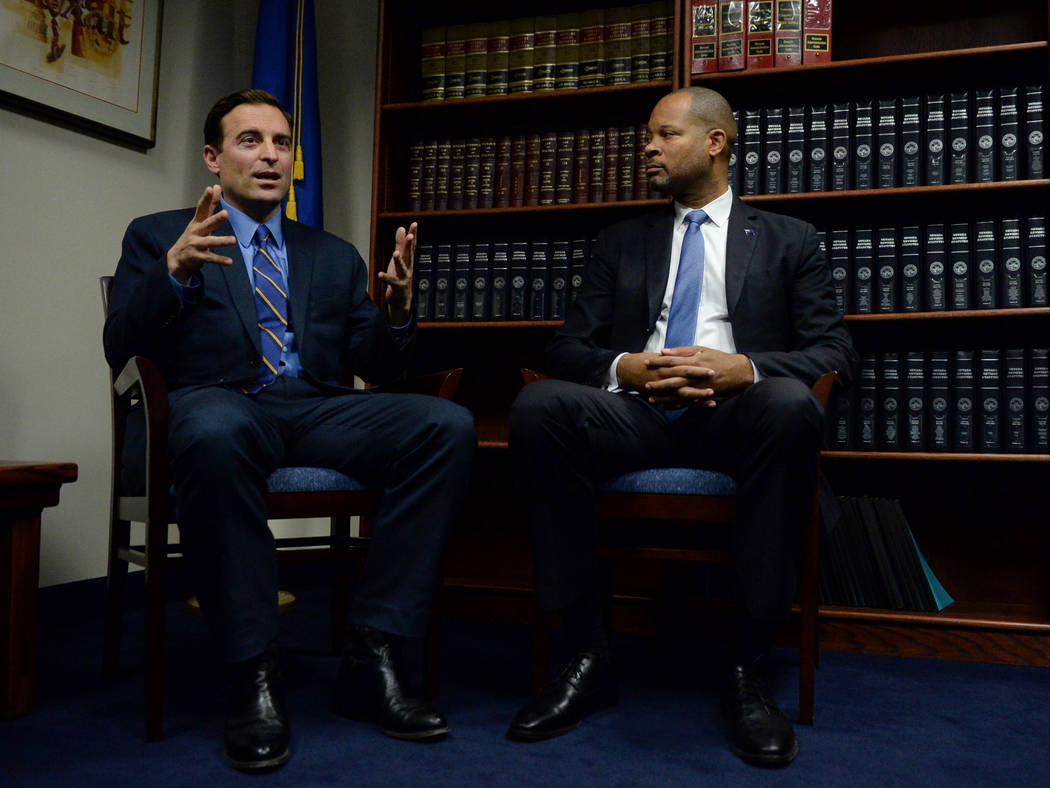 Nevada Attorney General-elect Aaron Ford this week reiterated support for background checks on private-party gun sales, pledging to collaborate with stakeholders on the stalled initiative while pointing to legislation being drafted that he said would “fill the holes that are apparent” in current policy.

“I’m going to work with whomever we can work with,” Ford said, “whether it’s the governor’s office, the Legislature, the FBI, law enforcement to actually implement this particular petition.”

But Ford, speaking with reporters alongside outgoing Attorney General Adam Laxalt in Las Vegas to address the office’s transition, deferred to the legislative process for details on how a background check would work, including whether it could bypass the federal system.

He also did not say whether he would modify the office’s opinion, issued by Laxalt in 2016, that such a measure is effectively unenforceable because it would force the FBI to conduct the checks. Ford did say he will review the legal analysis after being sworn in next month.

Two years ago, voters narrowly approved an initiative to require the FBI to perform background checks on private-party gun transfers. The FBI had said it would not, in part because a state cannot dictate how federal resources are used. A district court judge then dismissed a lawsuit in August that accused Laxalt and outgoing Nevada Gov. Brian Sandoval of not doing enough to enforce the initiative, known as the Background Check Act.

With a Democratic-controlled Legislature, the hot-button issue promises to be cast as a partisan effort in the months ahead for an office that Laxalt characterized Monday as nonpartisan “99 percent” of the time. Democratic Gov.-elect Steve Sisolak is a proponent of background checks, as is Ford, who won his seat on the Democratic ticket.

Ford demurred when asked whether Nevadans would notice a discernible difference between a Laxalt and a Ford administration, saying his impression was that the office’s staff is “less concerned about party politics” and more interested in improving the lives of state residents.

“I think on some issues, to be sure, you’re going to see a shift in focus,” Ford said. “But as a general matter, people are going to be able to see that our focus in this office is on representing Nevadans on things that are important to them.”

Seeking to ensure that Ford “had a real running start,” Laxalt said transition efforts have included walk-throughs of the nearly 400-person office and meetings with senior leadership.

Ford lauded those he had met with and did not offer specifics on how many current staff members, some with three or four decades of experience, he planned to retain.

“Well, clearly we’ll be bringing in some people in my administration that are new,” he said.

However, there appears to be certain common ground between the two administrations. Ford said he wants to continue “the legacy of some of the things (Laxalt has) done,” including clearing the backlog in rape kit testing and reviewing the investigatory process, combating elder fraud and serving veterans through the military legal assistance program.

“I just think the step that we took was being willing to lead in statewide issues,” Laxalt said when asked to describe his preferred legacy.

Laxalt was hushed on his plans for the immediate future beyond winding up the office “the right way” and recalibrating to focus on his personal life.

Bloomberg recently reported that Laxalt is on a shortlist of candidates to replace Ryan Zinke as interior secretary, although Laxalt would not address whether he had interest in the position, nor would he rule out any other public offices Monday.

“I’m just looking forward to having a little down time with my family,” he said.