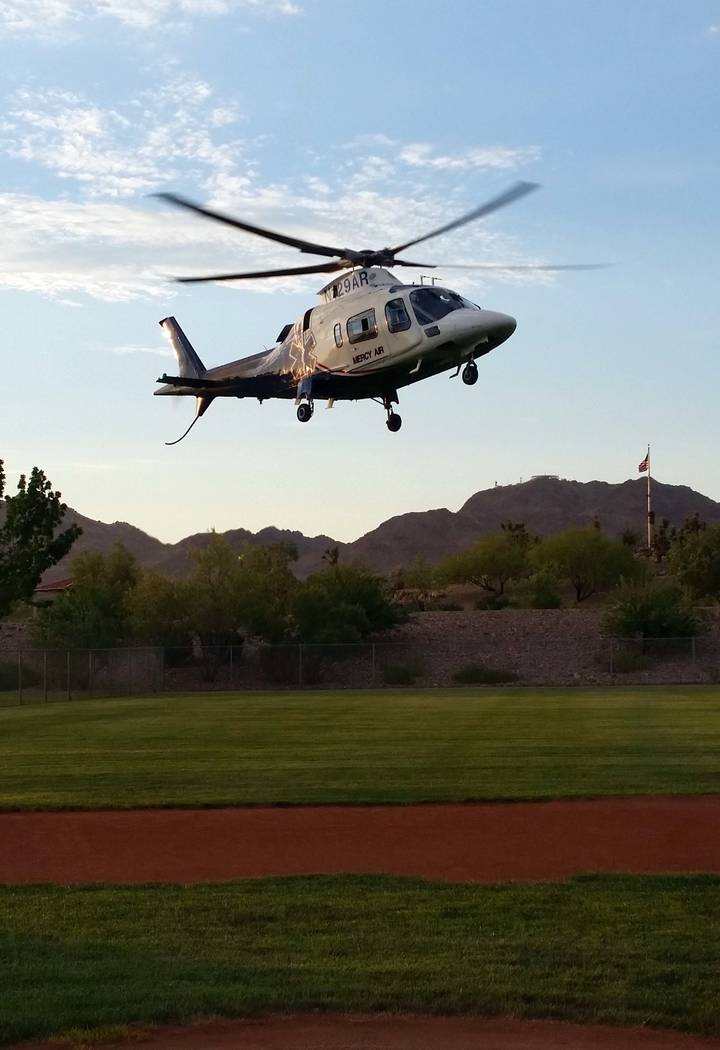 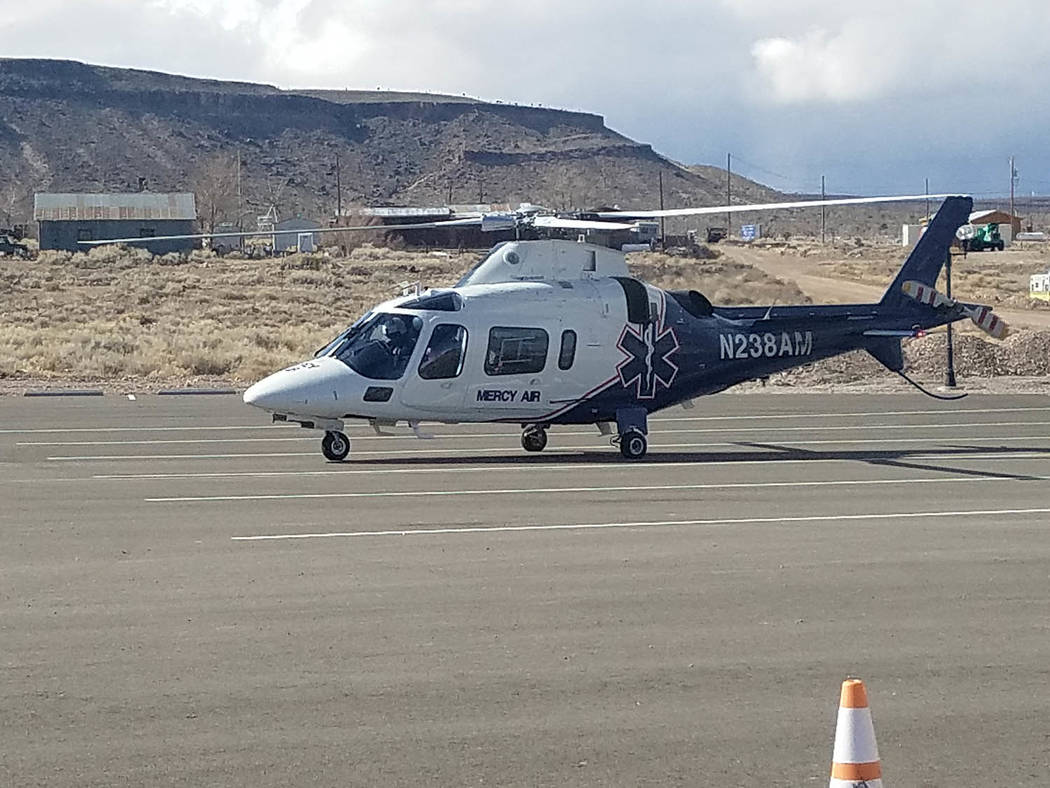 David Jacobs/Pahrump Valley Times The cost of Mercy Air’s around the clock readiness, averages nearly 3 million dollars per year for each air base, according to a cost study prepared for the Association of Air Medical Services. 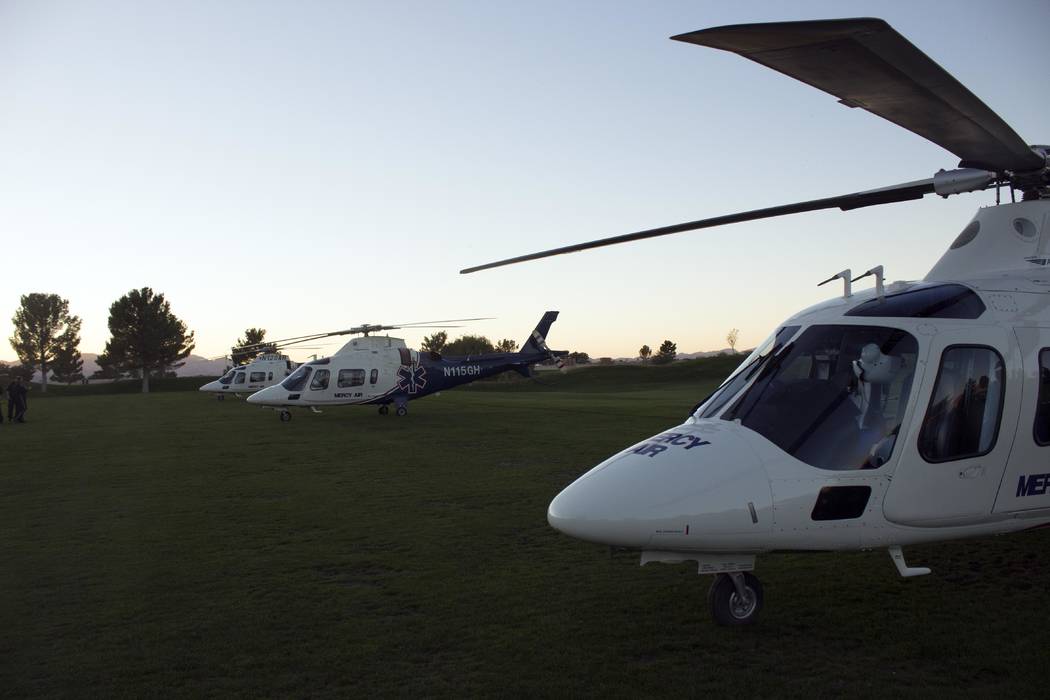 Jeffrey Meehan/Pahrump Valley Times Several Mercy Air helicopters in Pahrump on Oct. 26, 2017. Pahrump’s Mercy Air is a subsidiary of Air Methods Corporation, which provides emergency medical services to tens of thousands of patients each year, according to its social media page. 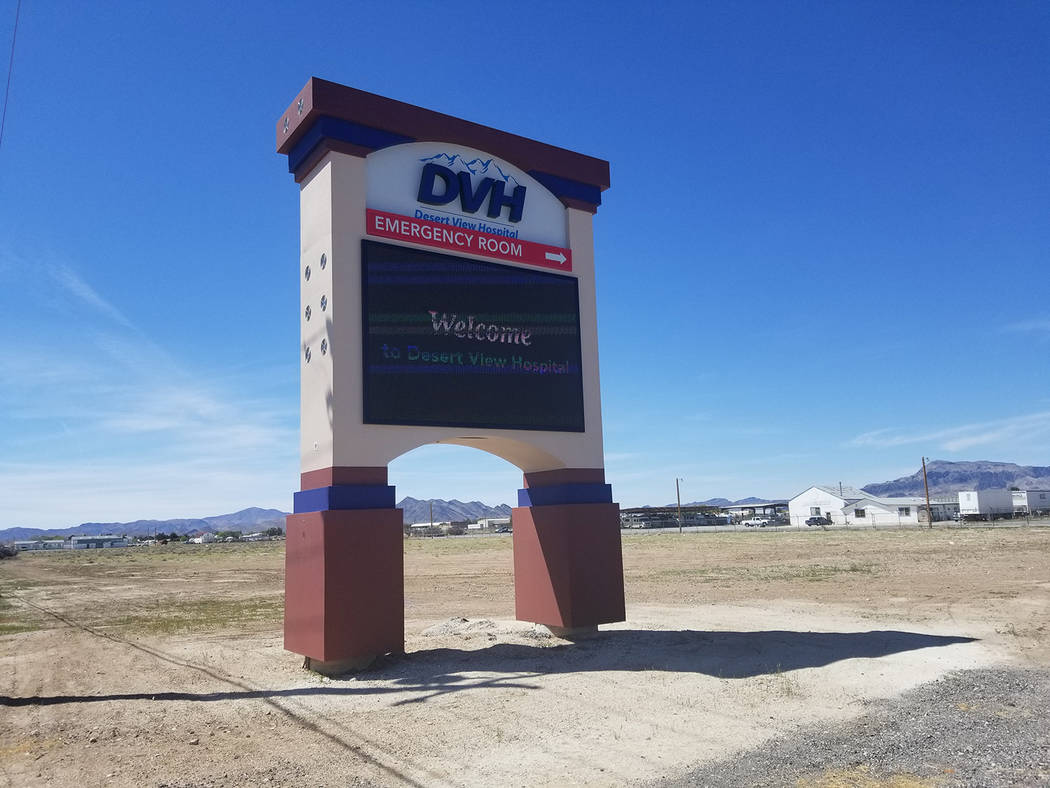 The director of communications and government affairs of Air Methods, the parent company of Pahrump’s Mercy Air, has issued a response regarding the circumstances of a Pahrump resident who was billed more than $50,000 for an air ambulance flight from Pahrump to a Las Vegas medical facility.

Nelson, who is in the advanced stages of multiple sclerosis, is now under care at a Las Vegas hospice facility.

She told the Pahrump Valley Times last month about the financial difficulties resulting from the air ambulance flight costs.

Nelson said her concerns should also serve as a caveat to other Pahrump residents faced with a similar situation.

“I had insurance because I was employed,” she told the Pahrump Valley Times for a May 24 story. “My insurance paid $24,768 to Mercy Air. I’ve been sent to collections for additional costs of $28,063.”

“I strongly believe a discussion was warranted before I was loaded onto a helicopter,” she wrote in an April 5 email submitted to the Pahrump Valley Times as a letter to the editor. “…Now I’m in hospice care, and bankruptcy is looming. If I had even an inkling the chopper journey would cost in excess of $52,000, I would have taken my chances on a road trip to UMC” in Las Vegas.

The Pahrump Valley Times reached out for comment from Desert View Hospital officials and was referred to Doug Flanders, director of communications and government affairs for Air Methods.

Via email, Flanders said that federal health privacy laws prohibit the company from commenting specifically on any case without the explicit written consent of the patient, but the company’s mission is to deliver emergency, life-saving care to anyone who needs it 24 hours a day, seven days a week and 365 days a year.

“Our advanced aircraft fleet and highly-trained clinicians and pilots act as first responders, and in many cases a critical link between hospitals for patients who need more intensive care,” he said. “We are acutely aware of, and sympathetic to the stress and financial difficulties large or unexpected medical bills cause many patients, not just those who require emergency air transports. our health care system is complicated, and unfortunately, patients are often caught in the middle.”

Flanders also spoke about the elements that would require an air transport for patients, while noting Mercy Air does not self-dispatch.

“When a physician orders an air medical transport, it is often because the medical facility does not have the right equipment, staff or expertise,” he said. “In these cases, our services are requested. We only go when we are called, and we transport every patient who needs our services, regardless of their ability to pay. We also do not have knowledge of the patient’s insurance status at the time of the call.

“We are focused on providing life-saving care. In many cases, we are the only link between hospitals for patients who need more intensive care, which is a responsibility we take very seriously, as we know that minutes count when we receive a request for transport.”

Flanders also noted that the cost of Mercy Air’s around-the-clock readiness averages nearly $3 million per year for each air base, according to a cost study prepared for the Association of Air Medical Services.

“Further, approximately 85 percent of costs are fixed costs associated with operating an air base, giving companies little leeway in reducing costs on their own,” he said. “However, reimbursement for services has not kept up with costs. Medicare, which covers air medical services in emergency cases only, established the current air medical service payment rates in 2002, based on an estimated 1998 cost pool. Today, the average Medicare per transport reimbursement covers approximately half of the cost per transport according to the Association of Air Medical Services study.”

“By offering these services as an in-network benefit, we allow members to focus on their recovery instead of unexpected bills,” he said. “However, if the low government reimbursement continues, businesses will be deterred from providing this critical service that is needed. The best solution is to increase Medicaid reimbursement at the state level and the federal government to increase Medicare reimbursement for air emergency services, which will ensure that the government doesn’t place this burden of debt on private businesses.”

Moving forward, Flanders noted that Air Methods is committed to providing the best possible care both on the ground and through the billing process, by way of the Air Methods Patient Advocacy Program.

“We help patients navigate the insurance billing and appeals process and provide them with the information they need to come to a financially sustainable resolution to their claim,” he said. “However, privacy regulations require patients to initiate communication with their health plans before our patient advocates can get involved.”

Though the Pahrump Valley Times had tried to reach Desert View Hospital for comment prior to the May 24 story, the newspaper did not receive a response prior to publication.

A Pahrump Valley Times reporter met with hospital representatives on June 3 and was asked to submit written questions.

Among some of the questions were: If possible, should patients be informed of the costs associated prior to Mercy Air transports?

What if a patient doesn’t have the ability to pay?

Do Mercy Air crews deploy without regard to a person’s ability to pay?

“For the majority of the questions, I’m unable to answer because Mercy Air is a separate entity and does not belong to the hospital…,” Gretchen Papez, a Desert View representative, wrote in part of her email response.

Later in the email, she wrote: “We have no further comment, but appreciate the opportunity to share a bit more information, and hopefully the Mercy/Air Methods rep will be able to answer your questions.”