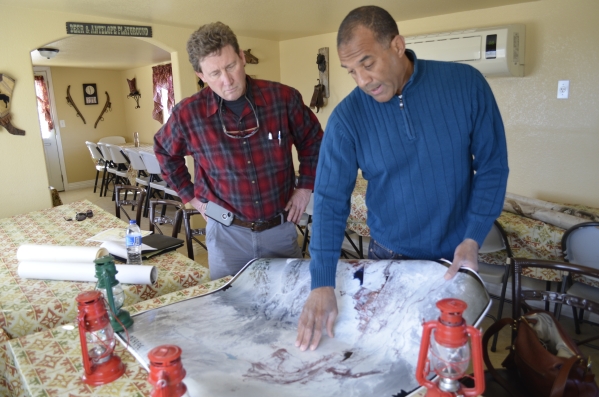 Victor Fuentes’ 40-acre property in the Ash Meadows National Wildlife Refuge turned from a sprawling oasis in the desert into a dried up patch of barren land in a matter of a mere few years.

In August 2010, the U.S. Fish and Wildlife Service diverted the creek from the property where Victor and his wife Annette Fuentes, the leaders of the Ministerio Roca Solida had founded the Patch of Heaven church camp, citing the need to preserve endangered species including the Ash Meadows speckled dace the that inhabit the refuge.

“Sometimes, I don’t sleep over this,” Victor Fuentes said recently, overlooking the grim picture from one of the church’s camp buildings.

The Fuenteses purchased the property in 2007 for $500,000 after they were drawn to its beauty. Victor Fuentes, a Cuban exile-turned a Christian pastor said they poured money and labor into the project, turning it into a gem in the desert complete with amenities and a babbling brook — its main treasure. Victor Fuentes still remembers the days when they were doing baptisms at the camp.

Affected by the excessive heat and deprived of water, the vegetation at the camp soon withered, leaving a thin line of dead of trees near where the creek used to be. A flock of Canadian geese and other birds that had been attracted to water don’t come to the Fuentes’ property anymore. The only thing that grows along the perimeter of the church camp now is weeds.

Victor Fuentes describes the view outside the windows of his church camp as “depressing.”

The December 23, 2010 rainfall resulted in $86,000 damage to the property after torrents of water gushed across its perimeter when the channel built by the U.S. Fish and Wildlife Service wasn’t able to accommodate it. The property incurred additional damages when a heavy storm swept through southern Nye County in October 2015. The damage estimate is now close to $225,000.

On a recent tour through the property, Victor Fuentes surveyed the damage that had been wreaked by the last October flood. Cell phone videos recorded by Annette Fuentes show the floodwater rushing across the road leading to their property, something the Fuenteses claim wouldn’t happen if the direction of the creek hadn’t been changed.

Joseph Becker, Fuentes’ attorney who also serves as a director and chief legal officer for NPRI Center for Justice and Constitutional Litigation in Reno said the federal government had violated multiple constitutional rights in one swoop by diverting the creek away from the Fuentes property. After filing an administrative claim against the government in late 2011, they had to wait 13 months until the government acknowledged the filing and said it wouldn’t pay anything.

The case grew complex over the last four years, frustrating both Becker and the Fuenteses, who said that fighting a governmental agency in court has been a tough task. The seemingly simple case, as Becker put it, now involves several legal claims including negligence and free exercise violation.

“We (also) asked for injunctive relief to restore the land to what it was before, to put the water back,” he said.

Becker said they are now awaiting a decision from the Ninth Circuit Court of Appeals on whether former refuge manager Sharon McKelvey, who resigned upon being sued, may be held liable for damages to the church camp.

Becker said they are also awaiting a decision from the Federal District Court on cross motions for summary judgment on the tort, free exercise and due process claims.

Becker also argued that the failure of the U.S. Fish and Wildlife Service to get the Clean Water Act permit and moving vested water rights away from the camp prior to diverting the creek constitute due process violations.

“In some ways, the reasons for doing what they did are legally irrelevant, but I do think they tell the story,” Becker said.

In a way, Becker said the Fuenteses are bearing the brunt of excessive government presence in Nye County where it controls more than 90 percent of the land.

Expert report conducted by Blaine Reely, a civil engineer and hydrologist regarding hydrologic impacts to private property said that the construction of the dam and the channel located north and east of the Fuentes’ property resulted in a significant change to hydrologic regime and character of the property.

“The USFWS, their consultants and contractors, did not follow reasonable standards of the industry during the planning, design, engineering and construction of the Carson Slough Diversion Channel project,” the report said. “Specifically, the USFWS failed to consider potential adverse impacts to the plaintiff’s property which resulted in flood damage, a continued increased risk of flooding and the potential for future loss of property as well as injury and/or loss of life to residents and visitors.”

Becker said he doesn’t charge Victor Fuentes legal fees as a nonprofit, yet he has to bill for their out-of-pocket expenses such as traveling to various courts across the country and filing fees. The figure is in the tens of thousands of dollars.

“Any amount of money that we have, we have to use it for the case,” Victor Fuentes said.

In a follow-up letter on Jan. 5, 2016, Nye County commissioners said the agency’s conduct and action in Fuentes’ case caused many in Nye County to view federal management actions over land within the county and state with a “mixture of distrust and anger.”

“Nye County is perturbed and irritated that your agency has not only ignored us, but has also conspicuously dismissed and delayed owning up to and remediating the damages caused to Ministerio Roca Solida for almost five years,” the letter reads.

The Ash Meadows National Wildlife Refuge owns all of the bordering land around the Patch of Heaven. The Fuenteses are among a handful of people who still own properties in within the refuge boundaries that stretch across 23,000 acres.

Several maps that date back to the 1800s and 1900s show that the creek has always been on the land where the Fuentes’ property now stands.

Refuge officials cut off the water and moved it to a higher elevation in the name of historic restoration, but Becker argued that the action contradicts historical records.

“What they have done is they’ve cut off the water in the name of historic restoration even though there’s no history to indicate that ever happened, they moved it to a place where it’s never been to a higher elevation side of the church’s property and they made a channel that hardly accommodates a spring flow, let alone any heavy rain,” he said.

“There’s no history that where those buildings are has ever been flooded before until after they moved the water,” Becker said.

The U.S. Fish and Wildlife Service asserted that what they have do was to protect the endangered fish, but Becker claimed that in fact, the number of fish decreased as a result of those actions.

“It doesn’t seem like what they did had any benefit on the fish population at all,” he said.

“Much has been done,” Becker said. “We have gone all the way up to Supreme Court on the takings issue, but they didn’t hear it yet. They may still do it.”

The case has garnered attention over the years that the Fuenteses had been trying to prove in court that the brook belongs to their property. But Becker said it’s not unique as conflicts between government and individuals on property rights occur fairly often.

The reason the Fuenteses liked the babbling brook is because it served for meditational and recreational purposes and they wanted water for baptisms.

Without water, the property is worth significantly less, Victor Fuentes said, although they don’t have an estimate.

Now, if the government isn’t going to restore the property to how it was, then it’s resolved in a complete taking of the property, as Fuentes can’t operate a camp that is constantly subject to flooding, Becker said.

Since diversion of the creek, the amount of donations have diminished as did the number of groups visiting the church camp. Staying at the camp during the rain is now dangerous, Annette Fuentes said.

“Fortunately, the two times that this has happened, nobody’s been here. But when they bring them in the buses, they drop them off Friday night, they come back Sunday,” she said.

While the injunctive relief filed by Becker said the government needs to restore the watershed to where it was before, he said the price could be too high.

“It’s not really clear what will happen,” Becker said.

“If the water could be restored to its pre-August 2010 situation, we’d love to keep the camp, because this was their vision. It’s not clear that that can still physically be done,” he added.

Becker said he fears that if the restoration costs are going to be high, the government may just file a condemnation action and take the property. In that case Becker said the government should pay its market value.

Ultimately, Fuentes is also fighting to get reimbursement for his legal expenses.

“We are trying to get justice. If they are ultimately going to take it, then they should also pay for the damages that they caused in the meantime, the loss of use in the meantime and all the costs that we’ve incurred trying to ensure the justice is done,” Becker said.

But the property also has a lot of emotional value, as Fuentes said his family and members of the church and the community “poured their soul” into the place.

“Not only our labor, but our own finances, we put it over here to make this happen,” he said.

“That was our vision.”