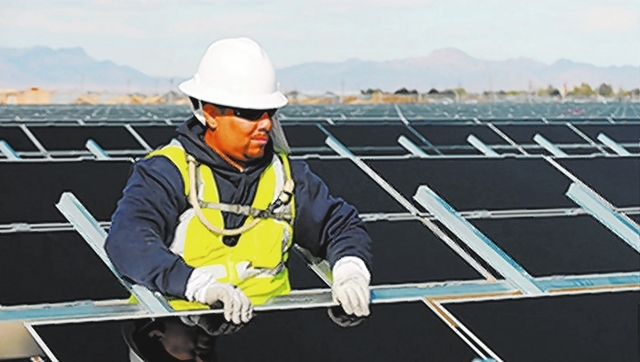 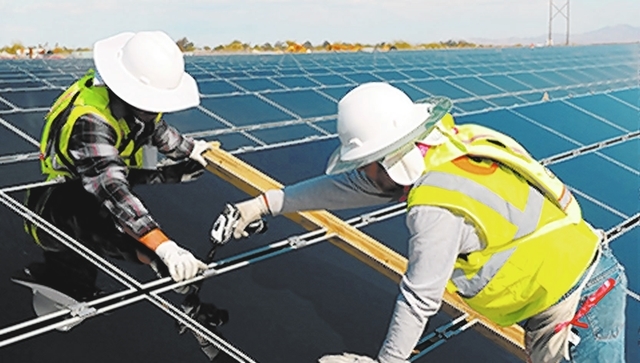 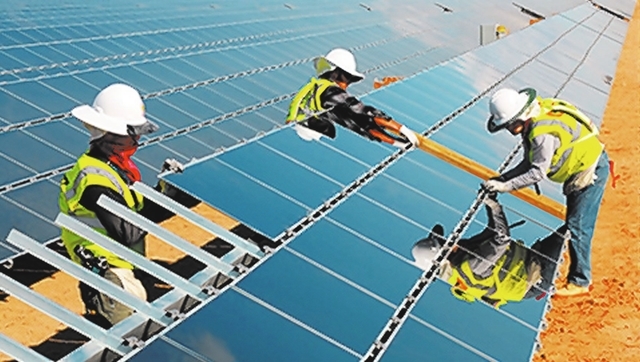 The solar plant would deliver power to the electric grid via the Valley substation owned by Valley Electric Association, a half-mile north of the project at the corner of Anvil and Powerline roads.

“The project will use First Solar’s solar PV technology and will require very minimal water use for electricity generation during operations,” the company states in an invite to the meeting sent to Amargosa Valley residents.

First Solar Inc., based in Tempe, Ariz., is building the 550-megawatt, Desert Sunlight Solar Farm six miles north of Desert Center, in Riverside County, Calif., east of Palm Springs, which is co-owned by NextEra Energy Resources, GE Energy Financial Services and Sumitomo Corporation of America. That will be enough to power 160,000 California homes when it’s operational in 2015.

The company is also constructing the 550-megawatt, Topaz Solar Farm on the Carrisa Plains on Highway 58 in San Luis Obispo County, Calif., which is also scheduled for completion in 2015. First Solar has three gigawatts under construction nationwide.

The First Solar website states the company was formed in 1999 and has become the world’s leading thin film module manufacturer. First Solar states it is the first solar company to produce one gigawatt in a single year. In August, First Solar acquired Element Power, with its 1.5 gigawatts of renewable energy projects, which had plans to build a solar plant south of Pahrump.

The Amargosa Valley project would be constructed by Sunshine Valley Solar LLC, a wholly-owned subsidiary of First Solar Development Inc.

Amargosa Valley residents may be skeptical of this project after sitting through public hearings for the Solar Millennium project, which would have built two, 232-megawatt solar plants on 6,320 acres of public land near Farm Road. Solar Millennium switched to a dry cooling technology to reduce water usage. The U.S. Department of the Interior issued a record of decision approving the project and Nye County Commissioners approved the development agreement in June 2010, which involved rerouting Farm Road. But Solar Millennium filed for insolvency Dec. 14, 2011, dooming a project that promised 1,300 construction jobs and 180 full-time jobs.

Laura Abram, director of public affairs for First Solar, emphasized this project won’t be as intrusive to Amargosa Valley as Solar Millennium.

“It’s a much different location, it won’t be as close (to town) as that project was and it’s a totally different technology. Photovoltaic, it takes the sun’s energy and converts it into energy. It’s very low lying and very low profile,” Abram said. “It’s got much lower visual impact.”

“We don’t require water to generate electricity, the only water that will be used will be during construction for dust control and during operations for sanitation purposes,” she said.

The company is still determining the route for the generation tie-line that interconnects to the substation, but currently that won’t cross public land either, Abram said, eliminating the need for time-consuming studies by the US. Bureau of Land Management. The project is planned on property owned by attorney Michael DeLee.

“This is going to be a lot simpler because it is on private land. We’re on track for the Nye County Board of Commissioners approval for a development agreement before the end of 2013, that’s the only discretionary permit required,” Abram said. “First Solar already has a great track record in Nevada, we got 500 megawatts of project either under construction or in development. We’re excited about Sunshine Valley Solar, it will bring much needed jobs and development to Nye County.”

“Amargosa Valley has good sunshine, good interconnection and good flat land so it’s an excellent location for solar. I think projects in general are starting to trend toward these more mid-sized projects. We’re excited and feel that we’ll be able to get this permitted fairly efficiently and quickly and look forward to getting this project forward,” Abram said.

First Solar hasn’t contracted a power purchase agreement yet with utility companies for the Sunshine Valley project, she said.

“The thing I like about it is the company is coming to the town to talk to the town and I think they are, as it was expressed to me, they are one of the more successful solar companies in the State of Nevada because of their concern for the local community. As far as I’m concerned that’s a welcome attitude compared to Solar Millennium,” Amargosa Valley Town Board member John Bosta said. “Our community could use a possible increase in tax money to the community and also jobs to the community.”

Bosta said the project would have to be approved by the Amargosa Valley town board as well as Nye County, which would require changing the town master plan, he said.

“I’m optimistic and open-minded to this group coming into our community and looking forward to working with them,” Bosta said.

Darrell Lacy, Nye County acting community development director, said the project has some plusses going for it. He said it will require less land, less construction traffic and is farther from community buildings than the Solar Millennium project.

“It’s fairly low impact. The challenge we’ve had with most people getting projects built is power purchase agreements, land purchase and transmission. By going on private land they have that one resolved. I think they’re in a location where they have easy access to Valley Electric line,” Lacy said.

The solar market is going toward smaller projects instead of the 300-to- 500-megawatt plants, he said.

“We’re very optimistic this one will come to fruition,” Lacy said of the First Solar project.