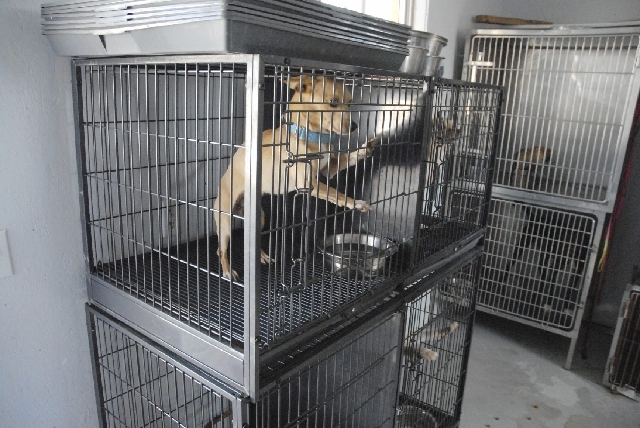 Nye County Animal Control officers launched an investigation into a local nonprofit animal shelter after receiving a report about poor conditions at the facility.

All the Same Wild and Tame, located at 6091 Gills Way, has been under investigation by the agency since last Wednesday after a report was made that animals were not being cared for properly at the location.

The investigation follows a walk-out by some of the business’s employees, some of whom told the Pahrump Valley Times they couldn’t take the working conditions they were subjected to any longer.

According to Nye County Animal Control Officer Susan Ryhal, the agency responded to a complaint on July 24 about the facility.

Though she said she couldn’t give too many details about the conditions animal control officers found during their initial visit to ATSWAT, she did say the agency has been back to the property every day since the report, working with owner Mary K. Miller to improve certain aspects of the facility.

“Well, it’s still an ongoing investigation, so we have no comment regarding the ongoing case, but what I can tell you is all the animals at the property are currently being cared for properly and animal control is doing numerous inspections throughout the week and we’ll continue to do so until the matter is resolved. But she has complied with all of our requests and all of the animals are being cared for properly at this time, which is our utmost concern,” Ryhal said.

When asked if animal control was contemplating pursuing any criminal charges as a result of its investigation, Ryhal said she couldn’t comment on that as the case it still pending.

Though animal control officers couldn’t give many specifics on the case, a former employee who said she and her husband walked out of ATSWAT on July 23, said the conditions she saw while working for Miller were deplorable.

Karen Crispell, who quit her position with the shelter last week, said she witnessed several dogs and cats die after coming to the shelter from lack of nutrition and medical care and said many times there were too many animals to care for with the limited staff on duty at any given time.

“She rescued animals from an LA shelter, and without taking them to the vet, she brought them directly to our facility and just dropped them off. They weren’t quarantined or anything. I believe the dogs had diarrhea for about the past two weeks. I believe the boarders, animals who come in and we get paid to take care of, were going home sick. I do know the disease that was over there, I brought home to my own animals and my own animals are now deathly ill. We might not have one within the week,” Crispell said.

The former employee also complained about the workload placed on volunteers.

“She would have two people on schedule who weren’t allowed to work more than three hours a day. Whatever did not get done, then the next day we would try to get it done. Now my husband and I could not leave the animals like that. So we took it upon ourselves to be there anywhere from 10 to 12 hours a day making sure the dogs were cleaned and the bedding changed as much as we could. She had, the weekend of the 20th, more than 80 animals at the facility between the kennel and the rescue. So how can two people do that in three hours?”

Crispell and another person formally acquainted with the shelter who wished not to be named, said one of the saddest stories they encountered was a small dog named Little Man who died at the shelter.

Crispell said the dog was a rescue Miller brought in and the employees spent hours nursing back to health.

After some point, they said he became ill again, and between that and the alleged lack of nutrition, he died.

“He was so thin when he passed you could feel the outline of his skull,” Crispell said.

Another source said that in another case, she tried to tell Miller a rescued Rottweiler was out of her medication, but nothing was ever allegedly done to get the dog a new prescription.

Though they all initially thought Miller was there for the love of the animals, Crispell and others said they soon came to believe she didn’t care for the animals at all.

“We thought she was there for the love of the animals, and that’s why I stuck by her and said you know what, you need to keep rescue and boarding and we will try to do everything we can to get your boarding up and keep the rescues clean, but she refused,” Crispell said. “Like five dogs died probably within two weeks and she was putting them in the garbage. I absolutely refused to put trash in that trash can, I said I cannot put trash on top of animals and I won’t. We lost probably seven cats within four days. Like I said, she was just bringing animals straight from the shelter and spreading disease to the whole place. And when we talked to her about it, it was ‘yes, we went to the vet, yes, we went to the vet, that’s my routine,’ well, then how did all of these animals get sick?”

The situation came to a head last week when Crispell said she tried to tell Miller again that many of the animals needed to be seen by a vet, and Miller allegedly refused, telling Crispell and her husband they were “too demanding.”

“I told Charlie (her husband) I’ve been working since six o’clock and she refuses to take these animals to the vet, I’ve had it, I’m done. And there were several times prior to this where I said ‘Charlie I can’t do this, I can’t,’ but this was just the final straw,” she said.

When asked about the allegations and investigation into her shelter, Miller said the complaint was likely lodged by several disgruntled employees after she accused them of stealing from the business.

“What happened was I had employees that were disgruntled because I was putting in an alarm system because there was a lot of theft going on. They stole a lot of food, a whole lot of bags of food and things like that, and they didn’t do their job on Monday of last week and then walked out Tuesday afternoon and called animal control,” Miller said.

When told about the accusations being made that animals had starved to death in her facility, she said that simply was not the case.

Miller did say, however, Nye County Animal Control had given her several suggestions to improve ATSWAT.

“They suggested certain types of water bowls so the puppies can’t tip them over, we put little step mats in to wipe our feet on, all employees have been asked to do several different things such as walk-throughs, making sure everything is clean and everybody has proper equipment every hour,” she said.

Miller added that people who want to see the conditions of her business for themselves can come by at any time, unannounced, and she will personally give them a tour of the whole facility.