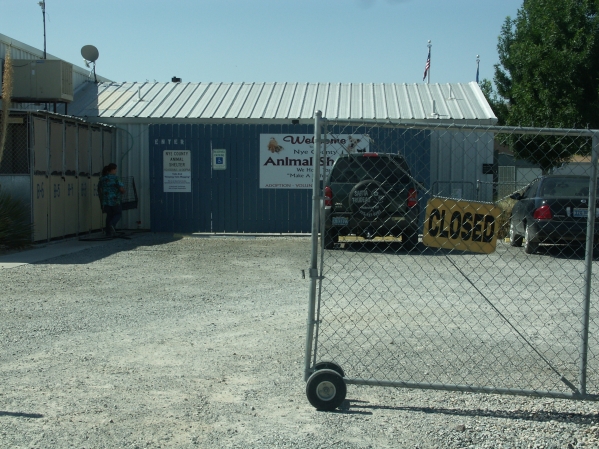 Payne recently gave permission for Nye County Animal Control officers to use the medium to alert the community on lost or stray animals, and the effort is now paying off.

“They post a photograph hoping to find the owners and we’ve had a pretty impressive feedback from it,” Payne said. “The Pahrump Pet Amber Alert is a Facebook page and it’s proved to be a great success.”

The action was prompted by the decision of Tails End Animal Shelter officials who canceled their contract with the county on June 30, forcing county officials to scramble in order to keep the facility running orderly.

Since the final day of June, the shelter has been closed to the public.

“I think we’re doing a better job through the Facebook page than we were when the shelter was open,” he said. “More people are apt to look at Facebook than they are anything else. At the end of the day, the real rock stars making this happen is our own public because there’s a lot of good people in this town who are stepping up to make a difference.”

Last week Payne went before the Board of County Commissioners to request filling a temporary kennel assistant position at the county-controlled animal shelter.

Commissioners voted unanimously to pass the agenda item, which will help to fill a void at the shelter for the overall care of the animals, some of which are on a court-ordered hold.

At present, Payne said there are still roughly 70 animals housed at the shelter.

Payne said his department will have to cover the costs of the new, temporary position.

Monies will come from a fund that covers the maintenance and upkeep of the emergency services vehicles.

“Because there isn’t a budget for the animal shelter anymore, I had to take it out of the emergency management budget which is not good but we’re going to do everything we can to make adjustments by cutting back on overtime and a handful of other things,” he said.

“The kennel assistant position has already been filled and we had a handful of volunteers from the community who had the experience with the animals who are there,” he said. “Because of the nature of these animals I felt very fortunate that we found somebody that is skilled to handle them safely.”

Payne also said since the county resumed operations, the facility appears to be running more smoothly than ever. Additionally, Payne said his department is making extra effort to address the situation at the shelter.

He noted by closing the shelter to the public, the facility is doing a better job taking care of day-to-day operations.

“When Tails End left the animal shelter here in Pahrump, we were left with absolutely no one to take care of it,” he said. “Everybody and their brother in this department has been putting in the time to take care of the animals and it was absolutely essential that we get somebody to be able to do the cleanup and the feeding.”

Payne also said several area animal sanctuaries are showing an interest in adopting some of the animals.

Previously, the plan was to transport the animals to shelters in northern Nevada.

“So far they have been able to take everything we have,” he said. “I don’t suspect it’s going to last because we’re going to hit that actuation point where the community can only take so many. Unfortunately the animals are breeding faster than we can get people to take them. I must say those animal control officers have done a fantastic job and I can’t emphasize it enough.”