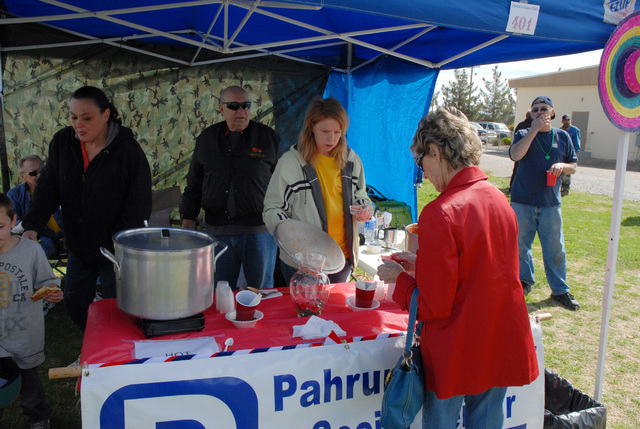 Anyone near Petrack Park on Saturday, from 9 a.m. to 4 p.m., is bound to catch a whiff of the many vats of homemade chili as the annual Silver State Chili Cook-off rolls into town once again.

Competitors from distant locales such as Colorado and Oregon are expected to arrive in town this week.

Organizer Ron Frazier said at least 25 contestants from the International Chili Society have signed on to compete.

“We also have around 10 entries from local residents,” he said. “One of them just happens to be the Pahrump Valley Times. The categories are all the same again this year and we are pleased to have ‘Mikey the Magician’ performing throughout the day.”

Frazier said the event has changed slightly after the Pahrump Chamber of Commerce decided to relinquish its oversight of the contest roughly four years ago.

He also spoke about his good-natured rivalry between fellow competitor Karen Jackson, owner of 95.1 KNYE radio in Pahrump.

“Karen Jackson and I became fierce competitors the first year,” Frazier recalled. “We’ve kind of had this ongoing feud, if you would. We both agreed that we’re friends when it’s not chili cook-off time, but when it comes to our chili, we are not friends.”

One team participating again this year are staff members from the Pahrump Senior Center. Astonishingly, the crew has taken first-place honors the past three years, in both the Judge’s Choice and People’s Choice categories.

Frazier said this year, members of the chili cook-off board have made a slight alteration for those gunning for the top prize.

“This year, what we’re doing is, we want someone else to be able to take home that first place trophy,” he said. “If the senior center wins again this year, we will give them a Grand Championship Plaque. Karen and I, of course think we’re both going to take first this year.”

“The senior center cooks, Yolanda and Tiffany are looking forward again to the chili cook-off and defending their titles,” she said. “We always have a lot of fun sharing our chili with everyone, and we are fortunate to have such great community support for the senior center and it’s an opportunity for us to also support a great organization, No to Abuse.”

“Of course this serves as a fundraiser for No To Abuse, Nevada Outreach Training Organization, and all of the funds go to benefit our programs here in town,” he said. “Karen, Noah Cusick, publisher of the Pahrump Valley Times, and I are board members.. Last year we raised about $12,000 for No To Abuse.”

Always maintaining his competitive spirit, Frazier would not budge when asked about his chili recipe.

“My recipe has beans, ground beef, tomatoes and spices,” he covertly said. “We always want to thank everyone who does come to the event. Everyone seems to have a good time and this year it’s going to be even better than it has been in past years. Hopefully we will have a good turnout.”