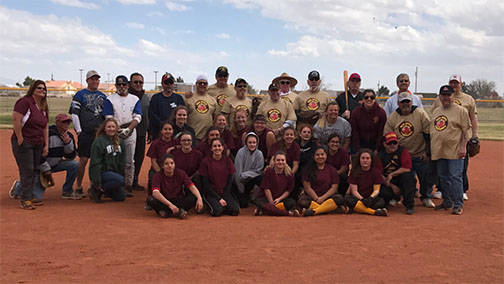 The Pahrump VFW Men’s Auxiliary faced off against members of the PVHS girls’ softball team in a match dubbed ‘Batting 1,000.’ The third annual fundraising event at Pahrump Valley High School raised upwards of $3,700, to be split between the teams. Special to the Pahrump Valley Times

It was a battle for the ages as the Pahrump Valley High School girls’ softball team squared off against members of Pahrump’s VFW Men’s Auxiliary this month.

The annual event dubbed, “Batting 1000,” served as a fundraiser for both groups.

Organizer Stacie Nicosia said the funds are divided between the two organizations.

“The money raised is split 50-50 between the auxiliary and the Pahrump Valley High School girls’ softball team,” she said. “We get our main hub of players from the high school softball team, but any girl of high school age can play, otherwise it loses its novelty.”

The game, Nicosia said, is not your typical battle between the teams, as there were plenty of hijinks, antics and outright buffoonery, as the men’s auxiliary team’s ages were 50 years old and beyond.

As a result, the designated runner was forced to use a walker to advance to the next base.

Players also had to adhere to certain rules, including no cleats, no stealing bases, and no sliding, to avoid injuries.

At least one player was “arrested” for theft of a base.

“We orchestrated this game that we thought would be a lot of fun,” she said. “In fact, my son dressed up as a police officer and one player, Mike Colucci, stole second base, so he was arrested by my son. He didn’t steal by trying to run from first to second base, he actually tried to take the base itself but it would not come up.”

He spoke of how competitive all of the players were during the event.

“There were 50-and-60-year-old guys diving for balls, hitting home runs,” he said. “At times, it was sheer determination on the players’ part to actually score runs and other times, there’s just a lot of clowning around where we would push a wheelchair out and put somebody in it and roll them back to the dugout. It was a very hilarious fundraising event, but it’s also a real softball game. The first two years I pitched, even though I’m not the greatest pitcher in the world.”

Additionally, the 60-plus-year-old commissioner lamented his physical limitations after hitting a solid single.

“I started running to first base and I saw the opposing player getting ready to throw the ball from third base,” he said. “I didn’t think I could ever run that fast. When I got to the bag, my legs just gave out on me. There are probably muscles I pulled that I didn’t even know I still had.”

Borasky also said he learned several things as a result of his performance.

“It is safe to say that I won’t try any more running next year, because I just want to pitch,” he said. “I’m only there to help raise money and have some fun with the others. We had guys on our team who are not young that were diving for balls in the dirt, catching the ball, and actually hitting home runs, as well as the girls. It was a fantastic day.”

The game, played at Pahrump Valley High School, raised upward of $3,700, to be split by the teams.

Bragging rights were on the line for the third annual event, as the teams entered the game with one victory each under their respective belts.

“We want to continue on with this fundraiser because it is so much fun and very important,” Nicosia said. “The first year the girls won the game and last year the men won, so this game was called the breaker. It was a lot of fun despite the high winds and dusty conditions during the game.”

When all was said and done, the men’s auxiliary bested the girls’ softball team by a score of 15-8, Borasky said.

“It’s just another one of those things that we do here in town that a lot of people don’t really know about,” he said. “It was only $2 to get in and I don’t think you can get that many laughs for $2 anywhere else. The entertainment value is obvious.”