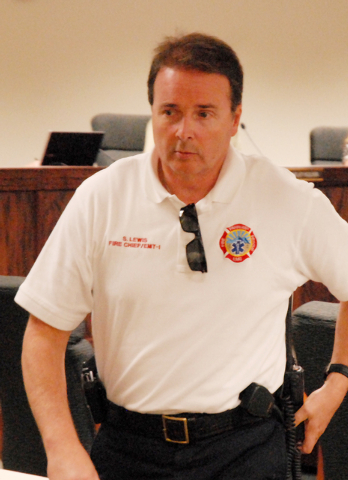 An arbitrator’s ruling last week that will see two fired firefighters reinstated has also revealed a high level of internal strife among staff and top brass at Pahrump Valley Fire and Rescue Services.

Beyond noting a series of alleged missteps by town officials, Las Vegas arbitrator Catherine Harris’ report highlighted a number of issues that had not previously been made public.

Among these are allegations against Fire Chief Scott Lewis of a personal nature that may have colored his role in firing the two firefighters. It also suggests he influenced the outcome of a supposedly independent investigation.

The more colorful allegations first surfaced in a wholly separate arbitration proceeding involving fired firefighter Chris Van Leuven — he was terminated for wrecking a vehicle and he was reinstated, but a judge threw out the arbitrator’s ruling. An allegation first made against Lewis — he was accused of dating a woman who was also dating Van Leuven — resurfaced, however, in the arbitration proceedings involving IAFF Local 4068 President Raymond Delucchi and firefighter/paramedic Tommy Hollis. They were fired as a result of a May 25 incident involving a woman who was bleeding to death on a stretch of Highway 160 between Las Vegas and Pahrump.

Delucchi and Hollis were fired for “negligent and wanton disregard” for allegedly not adequately assisting the woman and her husband, who had flagged down the firefighters’ ambulance for help. Delucchi allegedly earned the ire of Lewis when he questioned the chief during Van Leuven’s arbitration about his “dating relationship” with the woman Van Leuven was seeing.

After a tension-filled episode at the Van Leuven arbitration, documents state that Lewis returned to his office and it was then that he received the couple’s complaint related to Hollis and Delucchi.

Later that day, Delucchi filed a complaint with human resources alleging among other things, that he was now experiencing retaliation as a result of his involvement with the Van Leuven arbitration that had occurred just one day earlier.

Chief Lewis later filed a counter complaint against Delucchi, alleging the union president had demanded that the town manager and HR director be present during the town’s initial interview process, which Lewis said is contrary to the complaint process in the department’s labor agreement.

Lewis further alleged that Delucchi was attempting to use his role as union president to thwart the town’s ability and his authority to conduct an investigation of the complaint made by the woman and man who stopped the firefighters for help.

Then Town Manager Bill Kohbarger retained the services of a third party to investigate the respective complaints against both Lewis and Delucchi.

Adam Levine, the attorney who represented Delucchi and Hollis during their arbitration, said even though the independent investigator, Pat Songer, director of emergency medical services at Humboldt General Hospital, was brought in to conduct an independent investigation, his findings were potentially tainted by Lewis’ involvement.

“The chief was supposed to have no involvement so they brought in somebody from the outside, but he really wasn’t independent. As the arbitrator found, the town’s claims that the chief was not involved was also not true,” he said.

Moreover, the arbitrator concluded that Songer did not perform his due diligence in respect to his independent investigation.

Songer’s resume reflects a 22-year career in emergency medical services including five years of experience in law enforcement but no experience conducting investigations.

As part of his investigation, Songer reviewed HR records, the town’s policies and procedures as well as the Nevada Administrative Code (NAC).

He also performed interviews of Hollis and Delucchi where he compared those with the interviews conducted by Lewis and PVFRS Lt. Steve Moody.

According to the arbitrator, Songer did not interview the couple who instigated the initial investigation because they refused to cooperate or they could not be contacted.

In fact, the woman’s husband committed suicide before ever documenting his side of what happened between he, his bleeding wife and the firefighters that summer night.

No evidence has been found to suggest his death was related to the investigation.

During the arbitration hearing, Songer admitted that though he received the phone number of the couple about 11 days before he interviewed Hollis and Delucchi, he made no effort to contact the couple in advance of the medic’s interviews.

Some of the “material misrepresentations” in Songer’s report were outlined by the arbitrator.

“Songer provided no explanation for the material misrepresentations and could not explain some of his recommendations. Songer reached his conclusions without independently evaluating the credibility of the complainants. Instead, he credited Chief Lewis’ report of what the couple told him,” the arbitrator noted.

An additional element surrounding the issue was the fact that Songer recommended that the town notify Medical Director Kevin Slaughter, M.D. for evaluation of whether Slaughter would continue to sponsor the medics’ licenses.

Songer recommended that Hollis and Delucchi be placed on unpaid administrative leave pending a “notice of intent” to terminate their employment even though there was no independent evaluation supported by “cogent and reliable evidence,” the arbitrator concluded.

Documents state that Slaughter was concerned that the medics’ conduct had put the town, as well as his own medical license, at risk.

Levine says it was Lewis who urged Slaughter to pull the medics’ licenses.

“As the arbitrator detailed, it was Dr. Slaughter who testified that the chief (Lewis) urged Dr. Slaughter to pull the license sponsorship. Even though the town claims the chief was not to have any involvement due to potential conflict of interest and questions regarding his neutrality,” he said.

On Sept. 18, both Hollis and Delucchi were notified in writing of Kohbarger’s intent to terminate their employment based on Slaughter’s revocation of their licenses as well as Songer’s findings.

Kohbarger suggested that his “hands were tied” during a final meeting with Hollis and Delucchi.

He supposedly asked the medics how they would continue working in their former positions if their licenses were pulled. He also asked them to explain what authority he would have to override the recommendation of a third-party investigator when the parties had all agreed to an outside investigation. The firefighters were then officially dismissed and the arbitration process began.

Kohbarger, Lewis and current Town Manager Susan Holecheck were all called for comment but refused to do so on advice of the town’s legal counsel.