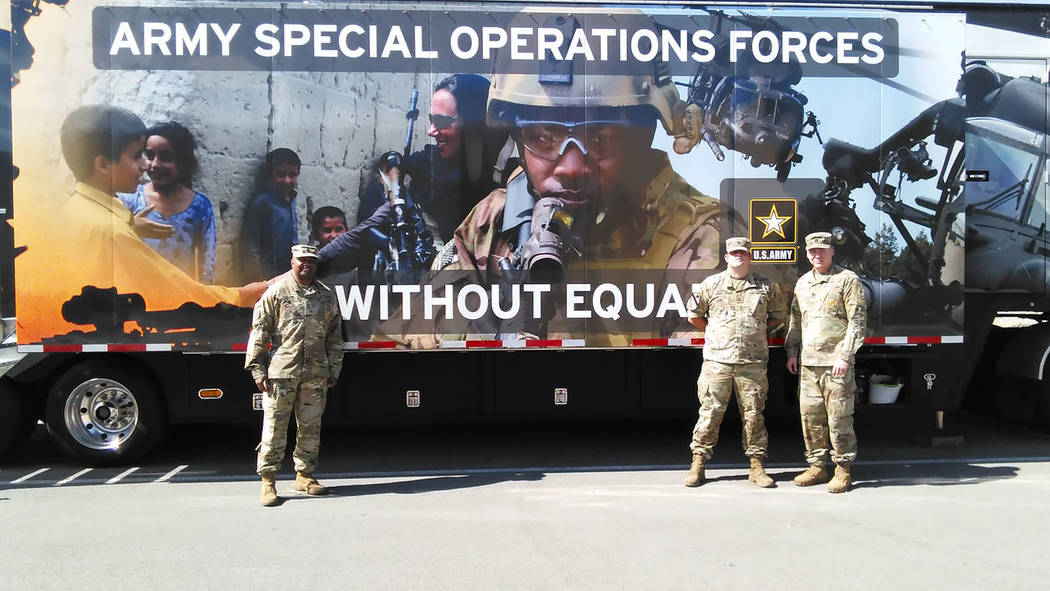 It’s a career that comes with attractive incentives, benefits with a good salary, and the employer is now hiring all qualified candidates.

Representatives from the Army set up shop at Pahrump Valley High School on Monday, where interested students received a firsthand virtual look at Special Forces operations.

The shop was a semi-truck and trailer containing numerous hands-on activities, thereby providing students with engagements found in the Special Operations field.

Army Staff Sgt. Jesse Beisner said any and all students were welcome to take part in the experience.

Those who chose, Beisner said, truly enjoyed the experience.

“We wanted to get the trailer out here just to show some of the experiences that the Army goes through,” he said. “We have an attack helicopter simulator, a parachute simulator that simulates falling out of an aircraft at 6,000 feet. They pull the cord and try to land on a target. There is also a Humvee simulator that has a machine gun, where they can be a gunner. They can also be in the driver’s seat as well.”

One student, Ryan Blankenship, is a JROTC cadet at the high school.

The junior said he plans to enlist in the Army after graduating next year.

“I’ve been with ROTC for about two years now, since my freshman year,” Blankenship said. “I’m a LET 2 which stands for Leadership Education and Training level 2. This year we will be working more in depth with Master Sergeant Smith on all of our duties.”

Regarding the simulators, Blankenship described the experience as fascinating and educational.

“After you walk in, you are able to partake in a few simulations such as the parachuting simulator, which straps you into a real parachute where you get to use virtual reality to see yourself,” he said. “There was also a driving simulator along with a gunner where you simulated driving in a convoy in a foreign land. There was also the attack helicopter where you conducted a mission with a Huey helicopter flying around. It was all very cool.”

“The Army trailer is out of Fort Knox, Kentucky and last year they were on the road for over 300 days,” Nary said. “The trailer also has a total emersion system where students could hear, smell and feel an actual situation that a soldier would encounter throughout the world where the Army is deployed.”

Aside from the virtual reality experience, Beisner, meanwhile, said students were also inquiring about what a military career can do for their respective futures.

“We are giving students information on the education benefits that the Army can provide them,” he said. “We can give them college tuition assistance, job opportunities, and so much more. There are a lot of special opportunities in the United States Army.”

“I plan on going with the ROTC program all the way through my senior year,” Blankenship noted. “After I graduate, I hope to become a ranger in the United States Army.”