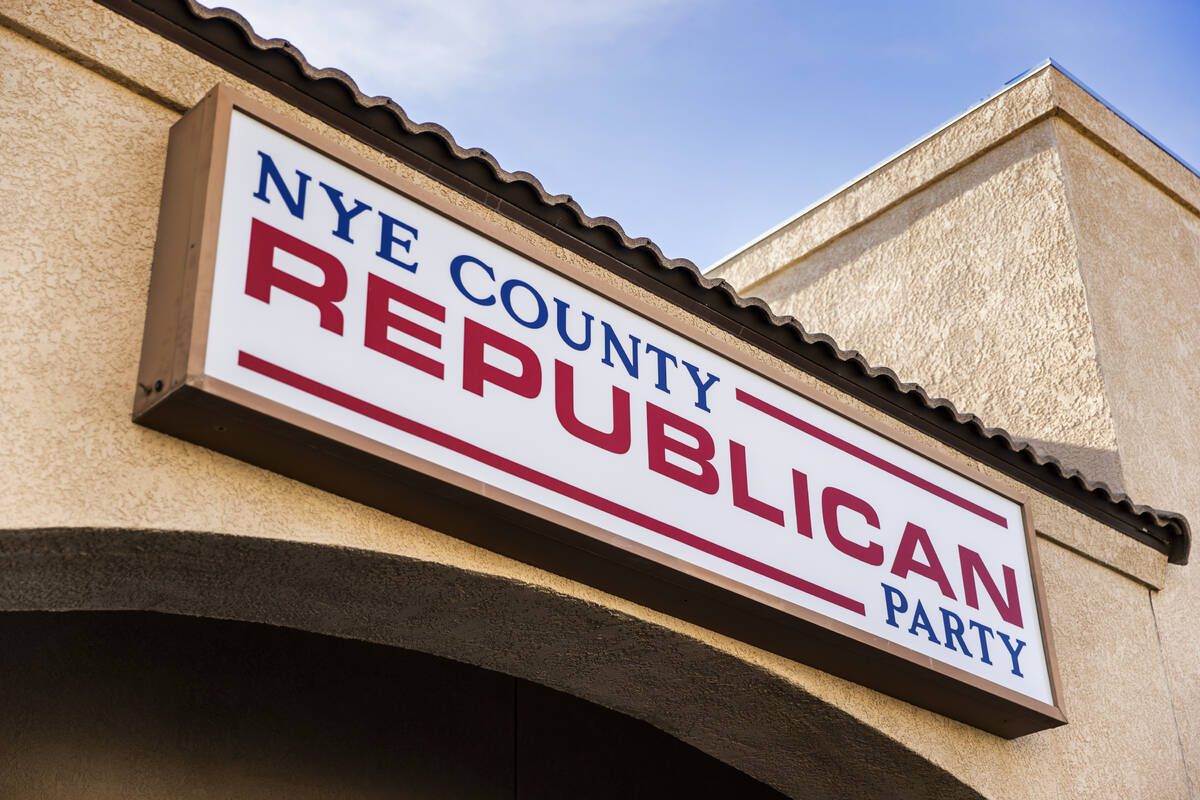 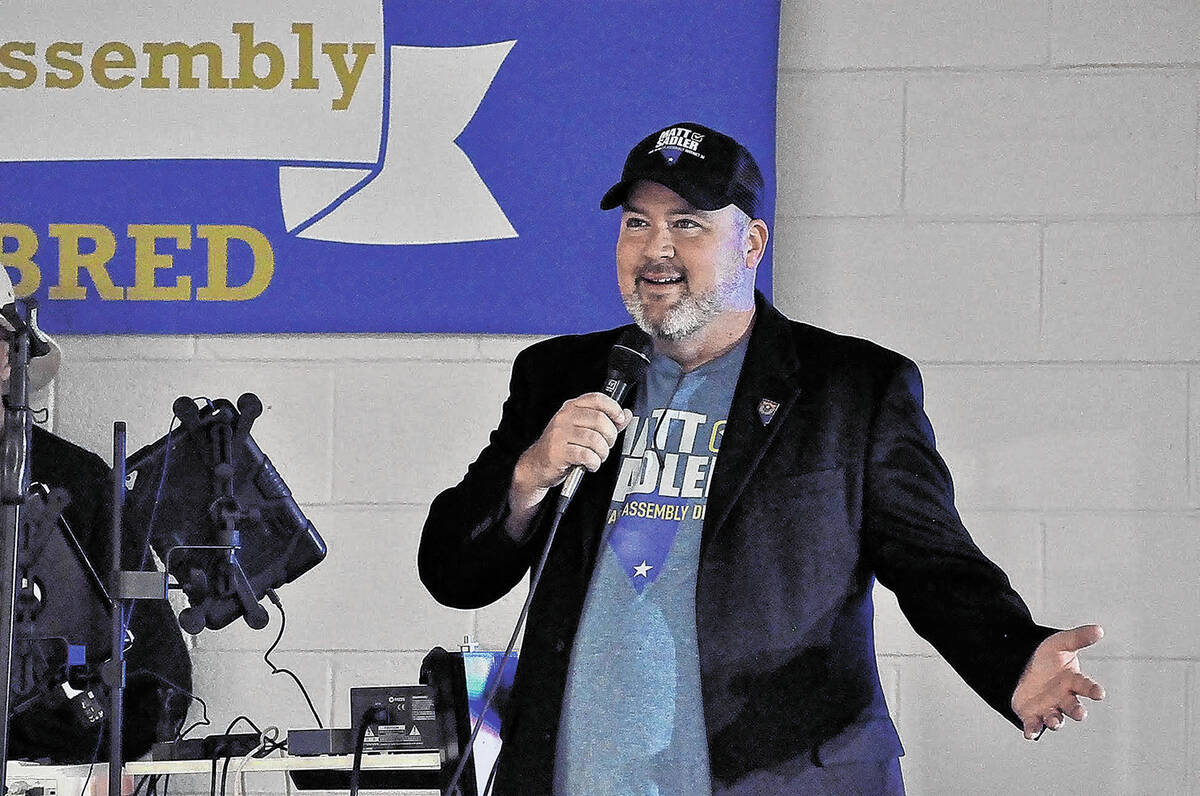 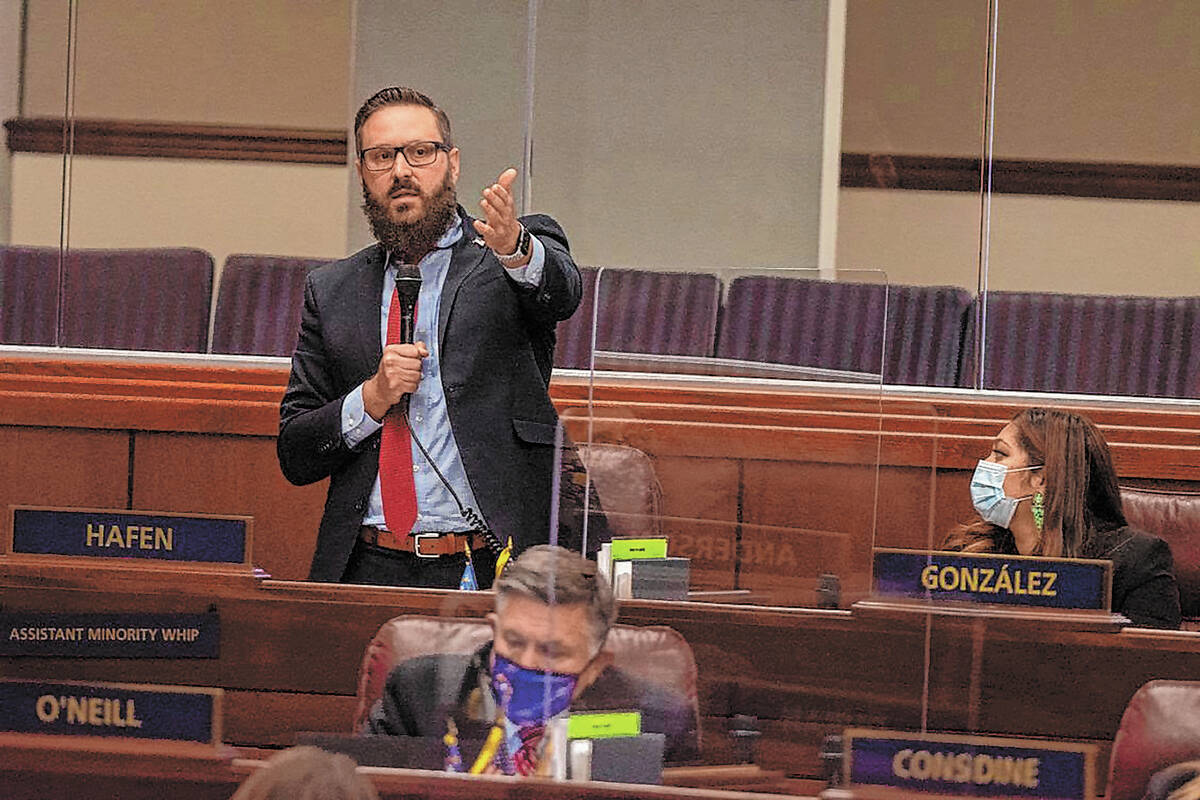 Special to the Pahrump Valley Times Nevada Assemblyman Greg Hafen II speaking before the Nevada Legislature during the 33rd Special Session, during which the new Nevada legislative boundaries were approved in December 20

The debate was sponsored by the Nye County Republican Party, KPVM -TV and the Pahrump Valley Times/Tonopah Times-Bonanza &Goldfield News.

Hafen is a fifth-generation Nevadan who is a right-to-life conservative and is running on his record. Sadler is also a lifelong Nevadan who owns a bail bond company and is fired up about representing District 36.

When asked about qualifications, Hafen touted his proven record. He served on the Ways and Means and Revenue committees and pushed the Voter ID bill.

Both candidates hold similar views on the biggest issue facing the state.

Sadler said it was overblown government and that the Republicans had the best ideas.

Hafen said it was Democrat control of the Legislature and elected offices.

What legislation would they push if elected?

Sadler would push for help for veterans, concealed carry and medical freedom; in other words, no mandates.

Another question was what they would not support if elected.

He also does not want the state micromanaging the sheriff’s department.

What would they do to improve rural health care?

Sadler would like to see tax benefits for MDs and dentists who move to rural areas while Hafen brought a bill which would reimburse tuition for rural MDs. He again mentioned MD reciprocity between states.

Along those same lines, the candidates were asked how to keep health care costs down. Sadler would like to see competition across state lines and Hafen wants to offer residencies and fellowships for the UNLV Medical School. Both were in favor of transparency of drug prices.

Questioned about how to handle the drug abuse problem, Hafen suggested that we get the Democrats out. Sadler wants to see better cooperation with Immigration and Customs Enforcement (ICE) and stricter drug laws.

O’Donnell asked, “The water shortage – should we use or lose it?”

Hafen was in favor of more conservation practices while Sadler suggested organic usage such as getting rid of salt cedar trees.

Both candidates were in agreement about what to do about Nevada being 49th in education attainment.

School choice was their answer.

Tourism and gaming are the two cash cows for Nevada, but both are susceptible to the economy. What other options are there for our state?

Hafen suggested inviting California industries to see the advantages of relocating to Nevada. He would also expedite lithium mining.

Sadler would kill the commerce tax and level the playing field. That would show that Nevada was open for business, he said.

Sadler closed by saying that he had signed the taxpayer protection pledge and that he wanted to keep government small. Hafen said he loves this state and thanked everyone for coming to the debate.

Bill Newyear is a freelance writer in Pahrump.