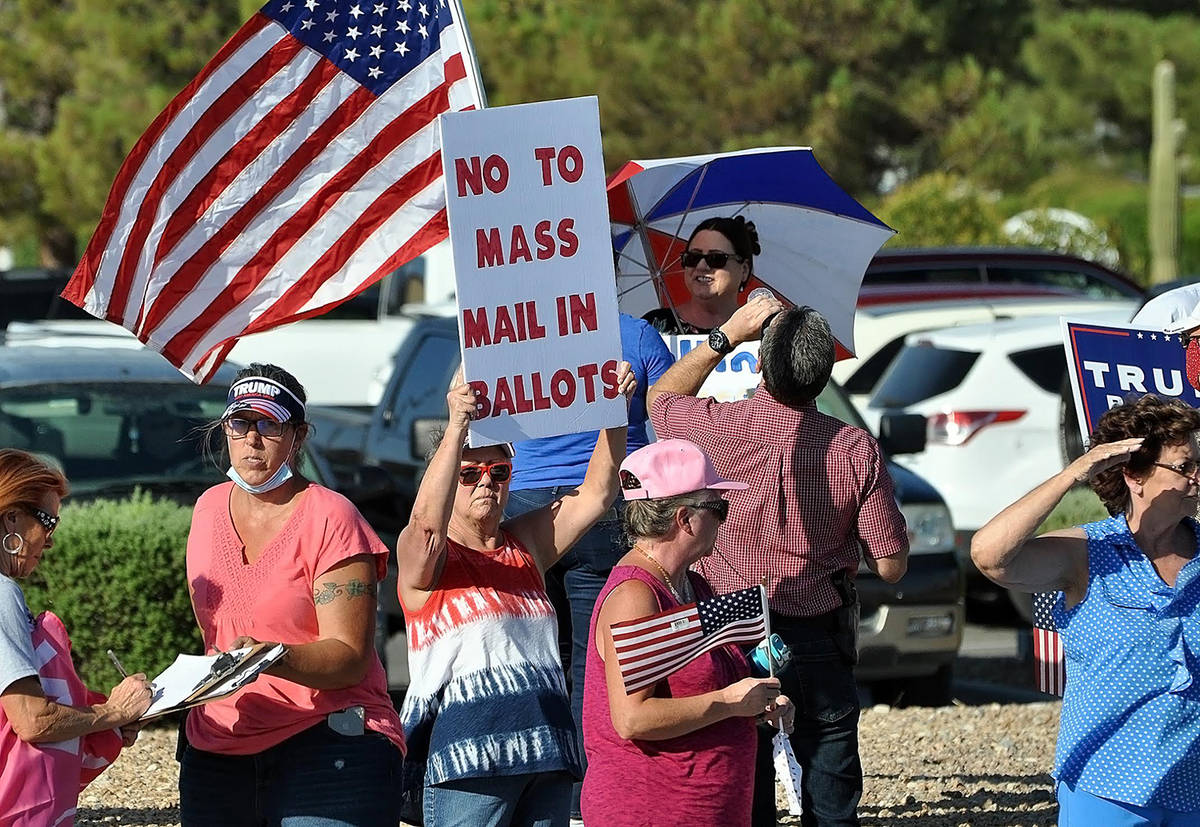 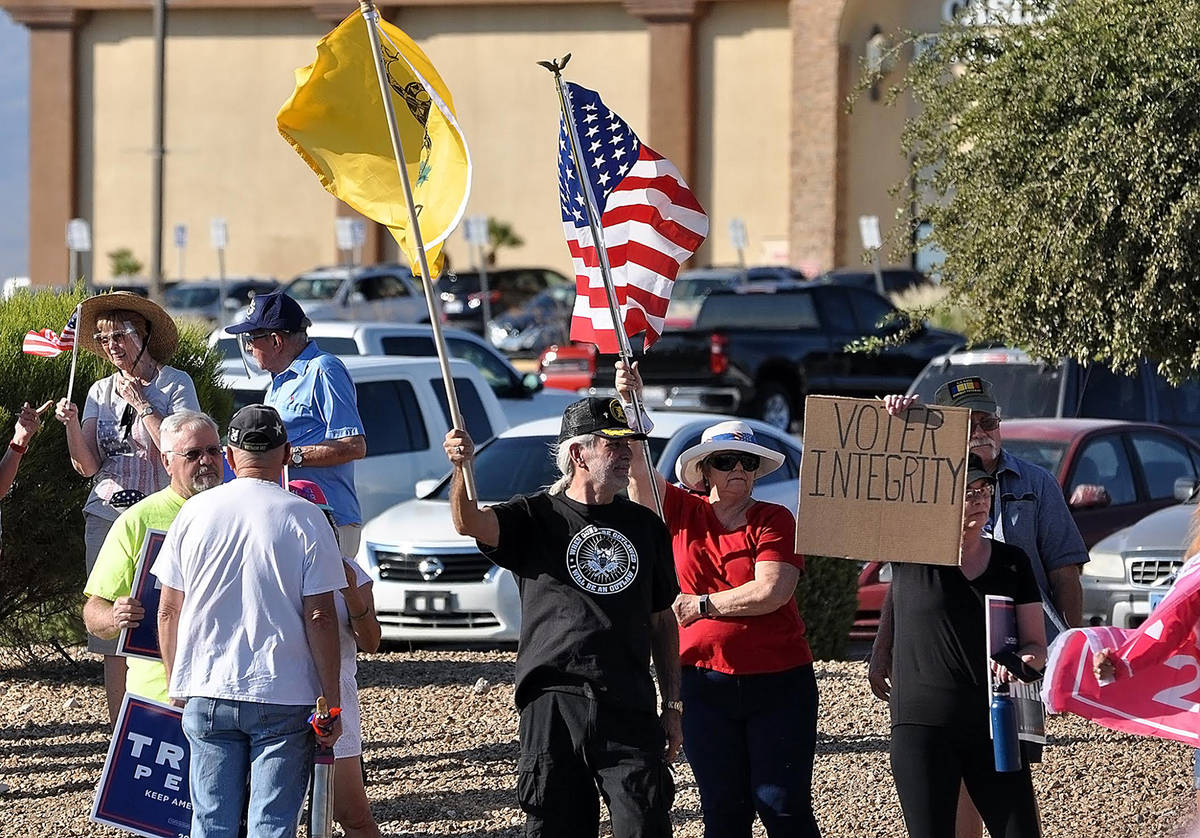 Horace Langford Jr./Pahrump Valley Times The intersection of Highways 160 and 372 was the scene of a Protect the Vote Rally hosted by the Trump re-election campaign, Nevada GOP and Nye GOP. 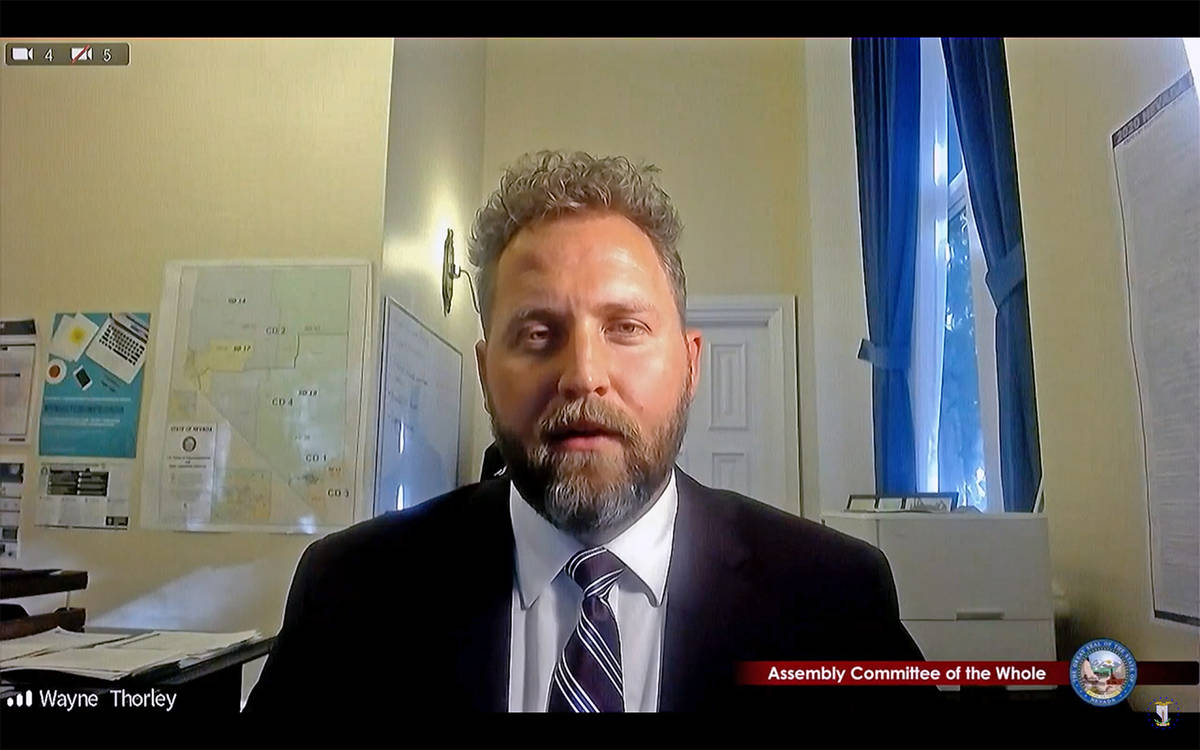 Screenshot This screenshot shows Nevada Deputy Secretary of State Wayne Thorley testifying before the Nevada Assembly on the highly controversial Assembly Bill 4, which was signed into law on August 3.

With the 2020 general election just three months away, Nevada legislators passed Assembly Bill 4 this month, among a stir of outrage from the Legislature’s Republican minority as well as a plethora of residents all across the state. The move has even caught the attention of President Donald Trump, who filed a lawsuit to halt the bill after slamming Nevada Gov. Steve Sisolak and Democratic legislators for what he termed a “late night coup” that he Tweeted would make it “impossible” for Republicans to win the state in 2020.

Assembly Bill 4 creates new regulations for elections that are “affected by certain emergencies or disasters,” such as what the state is currently experiencing with COVID-19.

During such times, the bill requires all county clerks in Nevada to send ballots by mail to each and every active registered voter in the state. However, it does not require an all mail-in election, as the bill also dictates that county clerks must still provide a certain number of polling places for voters to utilize for casting their ballots, both during the traditional early voting period and on Election Day.

While that fact may please those who were concerned about being able to vote using a voting machine rather than by mail, it also disturbs some who feel that it leaves the door wide open for voters to cast their votes twice, once in person and once by mail. That idea, however, is simply not possible if the systems that are already in place are followed, according to Nye County Clerk Sam Merlino, who took the time to provide details on how the process works in an attempt to calm some of the furor surrounding the bill’s passage.

Merlino continued by explaining that once her office receives a voted ballot, if that same person shows up to vote in person, tries to request another ballot or for some reason turns in an additional ballot, the record will show that person has already cast their vote and they will not be permitted to vote again. “This works the same way during any election,” Merlino stated. “If a voter votes early and decides to try to vote again on Election Day, the record will already show them as voting.”

Of course, there are those who do not trust the systems that are in place to prevent double voting but Merlino has reiterated many times that for her office, election integrity is the No. 1 priority, and she does not believe that will be a problem.

That does not mean she does not harbor any doubts about the new election laws, however. When asked how she felt about the change that allows a voter to authorize anyone to turn in their ballot for them, Merlino said she was not entirely comfortable with that new procedure.

“I am concerned about allowing others to turn in ballots,” Merlino told the Pahrump Valley Times. “In the primary, family members were allowed to do so after signing an affidavit. This bill allows anyone to turn them in, which I think could leave it open for voter intimidation.”

She’s not the only person expressing concern over that particular portion of the bill, either. Nevada’s own Secretary of State Barbara Cegavske, the state’s top election official, said she was very worried about the effect that “ballot harvesting” would have on the election, stressing that the removal of the law that prevents ballots being collected by just anybody could be “devastating” to the election process.

Furthermore, Cegavske made it clear that her office, despite multiple attempts to engage the governor and lawmakers in a discussion on how to approach the upcoming general election, had absolutely no hand in the creation of AB 4, which her office received for review not long before it was presented to the Nevada Assembly for its first vote.

Nevada Assemblyman Greg Hafen II, a Republican representing the constituents of Pahrump and much of Nye County, made his thoughts on the matter clear as well, blasting Democrats for the speed at which the bill was pushed through. He noted that he and his fellow lawmakers had only an hour to digest the 100-page bill before the Assembly hearing on it was to be held.

Trump Victory, a joint effort between the Trump campaign, the Republican National Committee and the Nevada GOP to re-elect President Donald Trump and Republicans down the 2020 ballot, have worked to organize multiple rallies in Nevada in opposition of mail-in voting.

Trump Victory Spokesman Keith Schipper, said in an email that “…We worked with all the local county parties for these protests. And we work with them to ensure victory in November.”

Taking place on Tuesday, Aug. 4, the rallies drew plenty of participation by those who were afraid that their election results would not be reliable or trustworthy following the changes in law.

“Democrats changed the rules of the game at the last minute to try and rig this election. They overturned a bipartisan ballot harvesting ban to allow strangers to pick up a ballot for anyone, including the most vulnerable to COVID-19, and have thrown out many important safeguards,” RNC Chairman Ronna McDaniel was quoted as stating. “AB 4 will destroy the confidence every voter deserves to have in our elections.”

Gov. Sisolak does not see the bill in the same light as critics, however, issuing a statement on the bill after signing it into law on Aug. 3.

“During this global pandemic, I made a commitment that we’d do all we can to allow Nevadans to safely cast a ballot in the upcoming November election. This bill will help prevent Nevadans from experiencing the long lines at the polling locations they faced during the primary election, which will protect their safety, safeguard their right to make their voice heard and help reduce the spread of COVID-19,” Sisolak asserted. “As I have said before, Nevada is widely recognized as being a leader in election administration and this bill will enable election officials to continue to support the safest, most accessible election possible under these unprecedented circumstances. I am confident that Secretary of State Cegavske, in coordination with local clerks and registrars, will run a safe, fair and accessible election this November.”

As for the costs attached to the bill, Nevada Deputy Secretary of State Wayne Thorley said the changes will result in $2 million in printing and initial mailing expenses alone, adding that the election is likely to cost $4 to $5 million in total.

For Nye County, Merlino said the new regulations would result in an additional $60,000 in costs over and above those associated with a normal election, adding, “The reasons for the additional costs are printing, postage and additional worker costs because this bill allows for an absent ballot central counting board to come on for 15 days instead of the normal four days before the election.”

Merlino was also sure to make clear to voters that there will be in-person voting in Nye County for the 2020 general election. “Although voters will be mailed a ballot for the November election, I plan to have at least two in-person polling locations with our electronic voting machines for those who prefer not to vote a paper ballot. We will also have ballot drop boxes in each of my offices and the polling locations for those who decide to vote the paper ballot but don’t trust the mail system,” Merlino said.