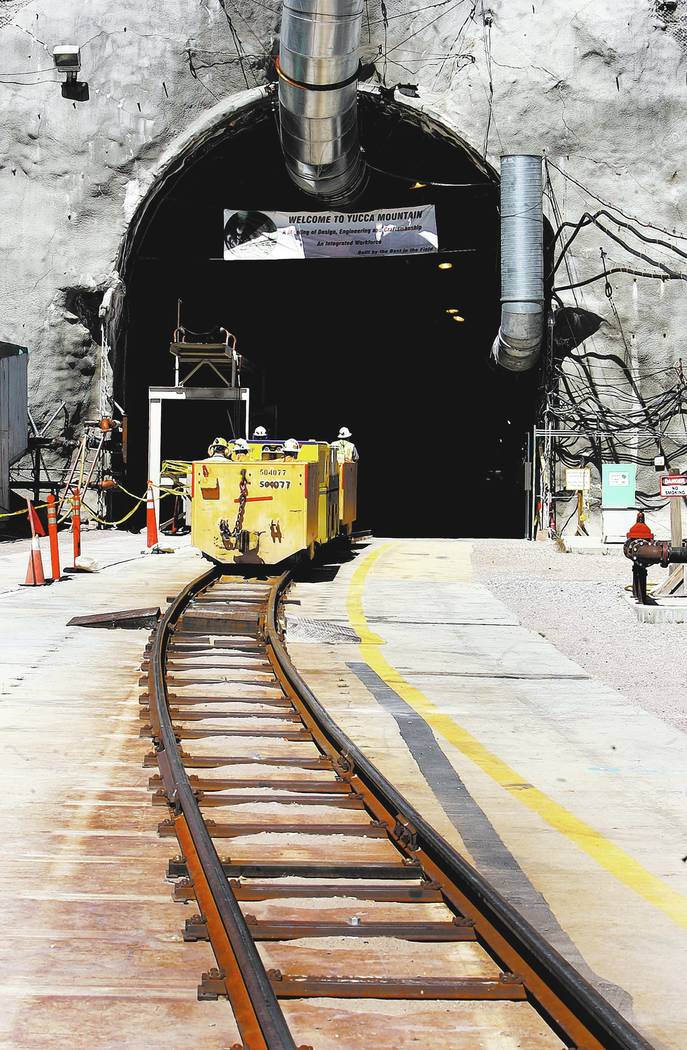 Nevada legislators on Wednesday introduced a resolution that expresses opposition to the development of a repository for spent nuclear fuel and high-level radioactive waste at Yucca Mountain. Special to the Pahrump Valley Times

Nevada legislators on Wednesday introduced a resolution that expresses opposition to the development of a repository for spent nuclear fuel and high-level radioactive waste at Yucca Mountain.

Assembly Joint Resolution No. 10 was introduced by Assemblyman Chris Brooks, D-Las Vegas just before the White House unveiled its 2018 fiscal budget plan for the Department of Energy that includes $120 million for the restart of Yucca Mountain licensing.

Nye County Commission Chair Dan Schinhofen issued a statement where he said that Las Vegas “is trying to dictate” what is best for the state with nine of the 10 sponsors of the resolution from Clark County, and 20 of the 23 co-sponsors from the same area. The other four elected officials come from Reno and Sparks.

“Nevadans deserve better than political grandstanding, the resolution is based on misinformation and assumptions about things that have not been decided yet,” Schinhofen said in a statement. “Nine of 17 counties in Nevada have signed resolutions supporting the federal law to hear the science on Yucca Mountain. After 35 years and $15 billion, Nevadans and the nation deserve to hear the science and have a decision made by an independent body. Political science should not overshadow nuclear science.”

Brooks in his statement said that it’s “disturbing” that President Donald Trump “would ignore” years of bipartisan work to end any kind of licensing at Yucca Mountain.

“My resolution is now more important than ever,” he said. “Congress needs to understand the severity of the situation. Reviving the licensing process to store nuclear waste at Yucca Mountain is not only dangerous for Nevada’s health and safety but it will also be catastrophic for Nevada’s tourism economy.”

The resolution restates Nevada’s delegation opposition to the proposed repository that has been stalled since the Obama administration scuttled its funding in 2010. It cites transportation, environment, welfare and health of Nevadans as top concerns.

“The Nevada Legislature protests, in the strongest possible terms, any attempt by the United States Congress to resurrect the dangerous and ill-conceived repository for spent nuclear fuel and high-level radioactive waste at Yucca Mountain,” the resolution said.

Meanwhile, Nevada lawmakers on Thursday were quick to criticize Trump’s plan for the restart of Yucca Mountain.

Sen. Catherine Cortez Masto called an attempt to revive Yucca Mountain “naive” and said it would be “a colossal waste of taxpayer money.”

“Yucca Mountain is nothing more than a hole in the ground and will never be a viable solution for dealing with nuclear waste,” Cortez Masto said in a statement.

“Yucca Mountain has been dead for years. Now, President Trump wants to run roughshod over the people of Nevada and throw away funding that could be better spent on infrastructure and creating jobs,” Kihuen said. “Nevada is not a dumping ground for the rest of the country’s nuclear waste and our rights shouldn’t be trampled over just because President Trump wants to put an unsavory waste facility in our backyard.”

Nevada Gov. Brian Sandoval said that for the remainder of his term, he will “vigorously” fight the storage of high-level nuclear waste in Nevada.

“Any attempt to resurrect this ill-conceived project will be met with relentless opposition and maximum resources,” Sandoval said in a statement. “Continuing down a path that seeks to force this unsafe and unwanted project on Nevada is a waste of time and money and only gets the country farther away from solving its nuclear waste problem.”

The Assembly Commerce and Labor Subcommittee on Energy is expected to hear Assembly Joint Resolution No. 10 on Monday.

In a resolution, the Nevada Legislature calls on President Donald Trump “to veto any legislation that would attempt to locate any temporary, interim or permanent repository or storage facility for spent nuclear fuel and high-level radioactive waste in the state of Nevada.”

The Nevada Legislature also calls on Perry “to find the proposed repository for spent nuclear fuel and high-level radioactive waste at Yucca Mountain unsuitable, to abandon consideration of Yucca Mountain as a repository site, and to initiate a process whereby the nation can again engage in innovative and ultimately successful strategies for dealing with the problems of spent nuclear fuel and high-level radioactive waste.”