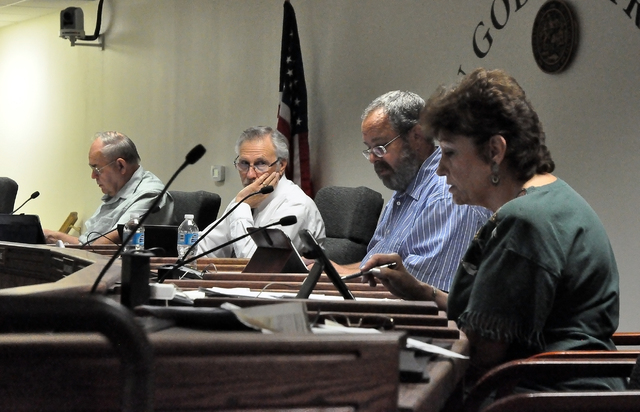 Auditor Daniel McArthur of Las Vegas presented the report for the fiscal year that ended June 30 to Nye County commissioners on Dec. 28.

In his presentation, McArthur touched on some of the financial highlights of the year and talked about statutory compliance requirements.

The government-wide net position in Nye County increased during the last year from $83.5 million to $86.1 million, according to the documents. The county’s government combined fund balance was up nearly $3 million to $58 million. The general fund balance, which operates the day-to-day operations of the county, had an ending fund balance of $6.7 million.

“So, if we were to look at the county from a position of are things getting better or worse, that would indicate things are getting better,” McArthur said.

The primary revenue sources for governmental activities were comprised of property taxes of $18.8 million, consolidated taxes of $14 million, and fuel taxes of $6.7 million. The total government-wide expenses were $62.2 million, according to the documents.

The greatest expenses were in the general government function for $18.5 million and the public safety function for $17.6 million. Business-type activities contributed an additional $5 million of expenses.

There were no fund budget violations in the general fund last year, McArthur said.

“The county’s financial status is strong as indicated in the audit, all functions in the general fund were under budget,” Rucker said in an email. “Tthe ending fund balance for the general fund is up $5.1 million from fiscal year 2015. All of these factors show significant improvement in our financial stability.”

“My primary concerns from the audit are, of course, the audit findings, including the budget violations, Property Safety Sales Tax Compliance, and Capital Asset Inventory,” she said. “Overall, the audit looks great and we are on the right track to financial stability.”

According to the report, there are two funds that have expenditures in excess of appropriations for the past fiscal year.

“The correction for this is in future years to budget a higher depreciation expense, and that’s the primary reason for that overexpenditure,” McArthur said.

“That’d be a significant improvement over the prior year,” McArthur said.

Additionally, during the past fiscal year, only the Pahrump Town Ambulance fund had a deficit fund balance. Its deficit is $1.6 million.

The deficit is caused by the estimated net pension liability, McArthur said.

“This deficit will continue indefinitely unless that net pension liability turns around at the state level with the PERS system,” McArthur said.

“This is all based on projections and studies with Public Employees Retirement System (PERS). Depending on the rate of return that the public employment retirement system gets on the investments they have, it has an impact on what this number is,” he added.

Other liabilities are net pension liability, which is $49 million and the estimated liability for retiree insurance payments, which are $24 million.

“The retiree insurance number has grown over the last few years. … It works based on the life of retirees and premium costs,” McArthur said.

According to the general financial report of the county, total cash and investments were $60.3 million, while total assets at the end of the year were almost at $200 million, including capital assets of about $122 million.