Richard Stephens/Special to the Pahrump Valley Times Locals attend a June 29, 2021 meeting of the Beatty Town Advisory Board. 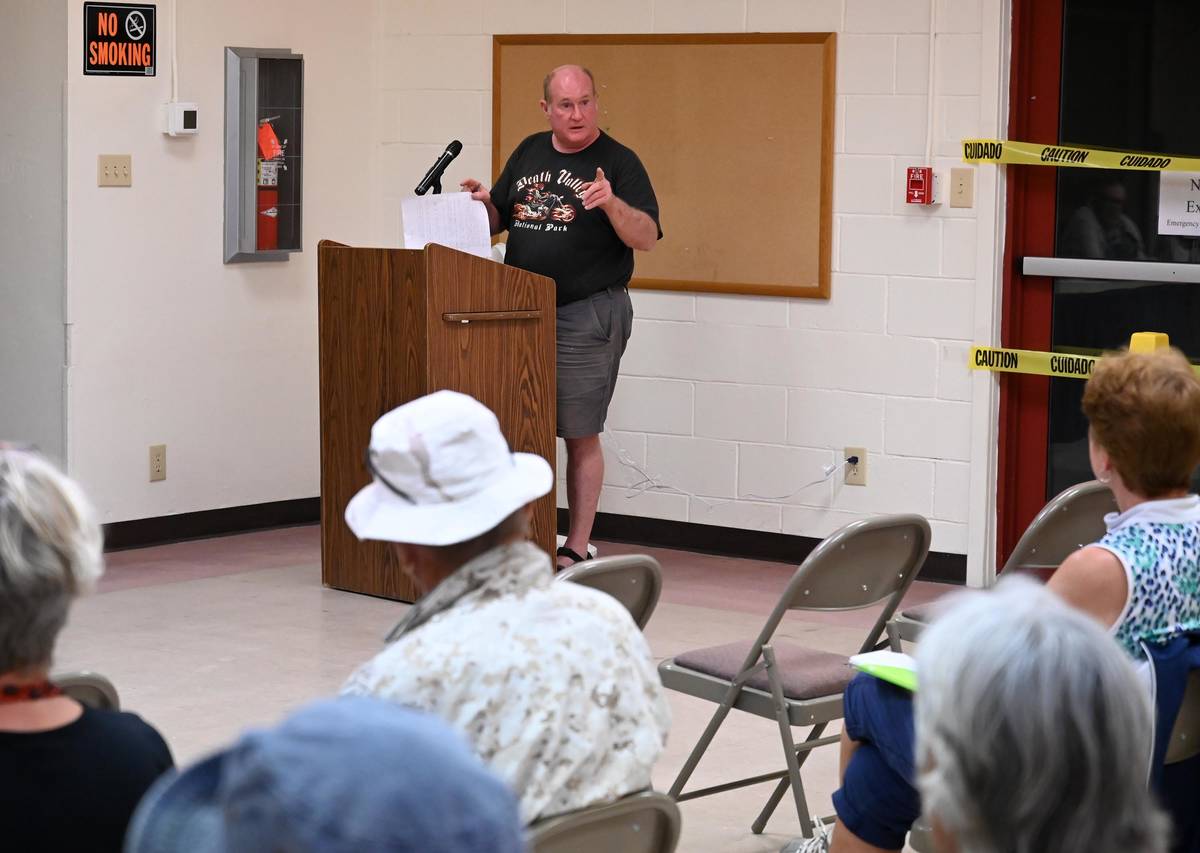 Richard Stephens/Special to the Pahrump Valley Times Beatty resident Charlie Lix airs a list of concerns about proposed solar projects in the area.

“Not in my back yard!” was the sentiment expressed by a larger than usual crowd of locals at the Beatty Town Advisory Board’s June 29 meeting as they voiced opposition to two proposed large solar energy projects near the town.

The projects, proposed by Boulevard Associates, LLC, of Juno, Florida, would occupy a total of approximately 16,500 acres of public land.

Most of the concerns were related to the smaller, 6,500 acre Beatty Energy Center Project, which would be located closer to Beatty and to Rhyolite ghost town. The other, the 10,000 acre Sawtooth Energy Project, would be more remote.

The Beatty Energy Center would extend from Highway 95 south of Beatty and Gold Center, skirt around the airport runway, then around the shooting range and the Barrick Bullfrog tailings area, then cross Highway 374, which goes to Death Valley, and swallow the first part of the road leading to Titus Canyon.

Much of the opposition to that project has to do with aesthetic disruption of the local landscape, especially the view for visitors to Rhyolite and to Death Valley National Park.

Other concerns expressed included disruption of roads, including the entrance to Titus Canyon and historic mining roads; light pollution from security lights; possible overuse of available water; disruption of off-road recreation; land-locking the town from development; and the possible hazard to pilots of having reflective panels around the airport.

Laura Cunningham, who co-founded the non-profit Basin &Range Watch, along with her husband Kevin Emmerich, said, “I like the idea of asking Boulevard Associates to come and talk with us.”

She advocated asking the BLM for “a full EIS” (environmental impact study) and for a thorough public review.

Emmerich suggested a “15-mile buffer zone” from solar projects north and south of Beatty. He also said that people in the National Park Service, for which he worked for 20 years, “are really worried about their view.”

Resident Jerry Hammes said he would like for the Beatty Town Advisory Board to form a sub-committee to work on this issue.

Beatty Chamber of Commerce President Ann Marchand said, “We need to be careful about our land around here,” and that the project would “skew our view—there’s not going to be any view left.”

Beatty Seniors, Inc. President Marty Campbell said, “We can’t let it happen. We need to all be back here all through this project.”

Among other things, resident Charlie Lix said he was against it “for the scenic beauty of our area.”

Although the bulk of the concerns had to do with the Beatty Energy Center project, the Beatty Town Advisory board voted to send a letter to appropriate agencies voicing these concerns and taking a position in opposition to both projects.

In other business, the board agreed to send a letter in support of an agenda item submitted by Robert Adams, of Pahrump. This involves a request for the county to participate with other agencies to “designate existing trails, roads and dry washes on public land into routes and routes into systems, so routes continue to connect places and other routes.”

Erika Gerling explained that this has to do with giving roads “designated” status to make it more difficult for things like solar energy projects to disrupt them.

The board also approved, as they have each year, to waive fees for the use of the Community Center, outside furniture, and a public address system by the Chamber of Commerce during Beatty Days.