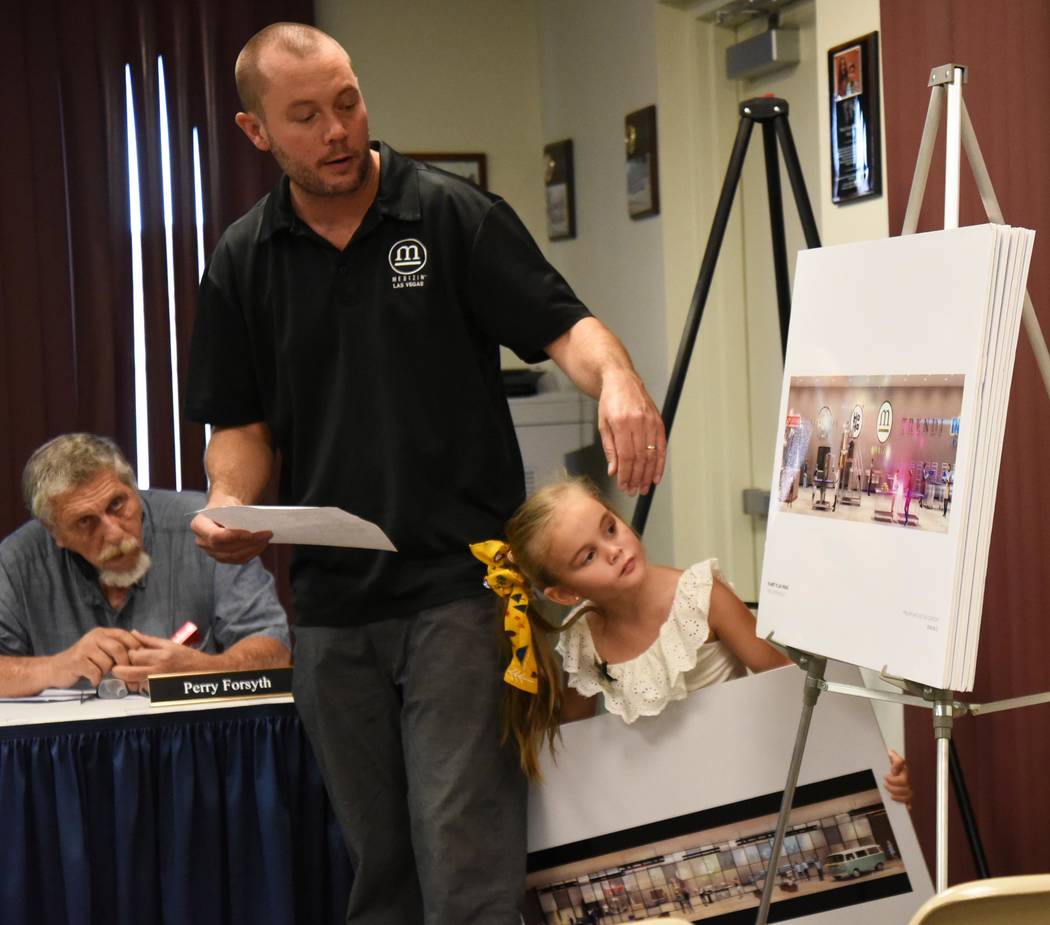 Richard Stephens / Special to the Pahrump Valley Times Cris Wen, from Planet 13, gives a presentation to the Beatty Town Advisory Board with the aid of his daughter. Board member Perry Forsyth looks on in the background.

The Beatty Town Advisory Board meeting of July 22 started off with a presentation by Cris Wren, vice president of operations of Planet 13, on expansion plans for the company’s facility just off the Las Vegas Strip.

The company’s Beatty facility is a marijuana growing and drying operation in what was formerly the strip club and brothel called Bikini’s.

Wren said it recently had an inspection by the sheriff’s office and county and passed.

They ship about 275 pounds of dried marijuana per year to their Las Vegas facility from Beatty and have plans for expansion.

Most of Wren’s presentation concerned developments at Planet 13 in Las Vegas. These include the building of a production facility near Trump Tower where people will be able to watch various marijuana products being manufactured and a restaurant and coffee shop with a view of the Strip.

He also said that the company is looking into expansion into California.

Board member Erika Gerling, who toured the Beatty operation prior to the meeting, described it as “immaculate,” and Wren said it was kept “hospital clean.”

The board gave its approval to the county’s proposal to repeal and replace its county-wide building and construction codes. This is to update them to the latest international and uniform codes, which is required by law. These codes are universal, while individual communities within the county can adopt additional requirements they deem necessary.

Gerling said that it was good for Beatty to be supportive when it can since there has so often been strong opposition to other proposed changes in zoning and codes in the past.

The board decided to hold off voicing support of a permit modification for U.S Ecology until after it conducts a public meeting on July 31.

Perry Forsyth said that he and Randy Reed had been looking into the possibility of building a 4-wheel drive obstacle course at the town’s disused golf driving range.

They were going to take their idea to the Beatty General Improvement District.