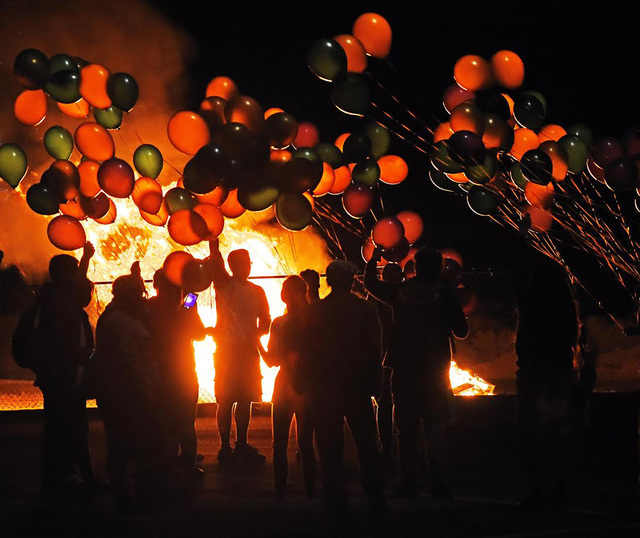 The Beatty High Senior Class of 2017 do a balloon release at the homecoming bonfire after Friday's homecoming game against Round Mountain. Richard Stephens/Special to the Pahrump Valley Times

One fireman from the Beatty Volunteer fire Department puts water on the fire with a hose while a group on the left get instructions. The silhouetted figure on the right of the group is Chief Mike Harmon. Richard Stephens/Special to the Pahrump Valley Times 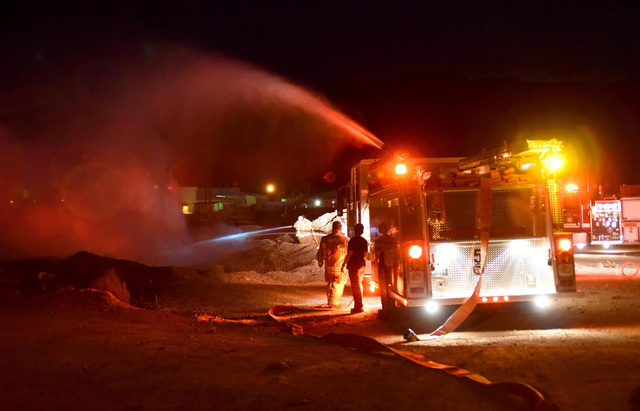 The Beatty Volunteer Fire Department's truck-mounted shoots water onto the fire with firemen using hoses in the background. Some faulty homecoming fireworks sparked a wildfire in a ravine. Richard Stephens/Special to the Pahrump Valley Times

BEATTY – This year’s homecoming may go down as one of the most memorable in Beatty High School history. Not only were the school’s athletic teams fired up to handily win their contests, but there was plenty of fire drama off the field.

The Beatty Volunteer Fire Department decided to set off some left-over fireworks to celebrate Beatty touchdowns in the football game. Unfortunately, some of the fireworks were less than cooperative and went off on the ground.

Luckily, there were no serious injuries to the volunteer firemen who were setting the fireworks off, but the accident did start a brush fire in a nearby ravine that had been used for years to dispose of landscaping clippings.

Firemen immediately went to work to extinguish the fire. However, some of the material, including parts of tree stumps and roots, were buried in the ground, and even though they called in a Beatty Water and Sanitation District backhoe to stir the material, there was no assurance that they had gotten the fire completely out.

Sure enough, they were paged around 11:30 p.m. on Friday for what was described as “a large fire behind Beatty High School.” The fire had re-ignited and grown considerably in size.

They knocked the fire down fairly quickly with hoses and a truck-mounted monitor, then continued to work it for at least three hours. Even then, there was some material smoldering underground.

Then on Saturday, Fire Chief Mike Harmon was called upon to respond to the Beatty Community Center when the fire alarm went off during the homecoming dance, and no one had the key needed to turn it off.

Teresa Sullivan said the culprit was a hot dog cooker they were using.

“It was done, but I guess it put out a little smoke, not so much that anyone even smelled it,” said Sullivan, but the shrill alarm went off, and the metal fire door separating the kitchen from the middle room came crashing down, and everyone was evacuated from the building.

At least there was no incident connected with the homecoming bonfire on Thursday, which went off without a hitch, including the highlight of the senior class releasing a large flight of balloons.