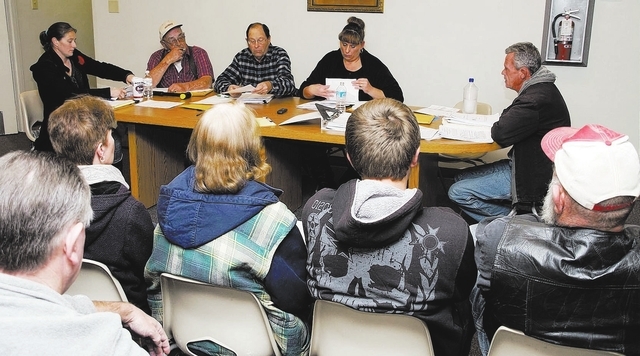 Dave Spicer came before the Beatty Water and Sanitation Board in an emergency meeting Feb. 28 with a proposal to make lemonade out of a very big lemon.

The lemon in question is a $120,000 fine levied by the Nevada Department of Environmental Protection in response to an incident in which the former manager and his crew directed an estimated 224,000 gallons of raw sewage into the Amargosa River Bed when a stopped-up sewer main overflowed. The fine could have been as much as $300,000.

Board member Jeannie Ibarra said that the fine could be appealed, but, “it would cost us all kinds of money for legal fees, and if we lose we have to pay that, too.”

There is, however, another option. Instead of paying the fine, the district can do one or more environmental projects with a total value of $150,000 (it is important to distinguish value from cost.) This is where Spicer becomes a proponent of lemonade.

Already favoring the project option, board chairman Amina Anderson asked Spicer to address the board, lending his expertise in creating and carrying out environmental projects and working with state and federal agencies.

Spicer said his nonprofit, STORM-OV, has projects that are already planned and ready to be funded that would fit NDEP’s criteria.

He said he had already talked with contacts in U.S. Fish and Wildlife and the Nevada Department of Wildlife, and their reaction was that “it’s too bad there’s a fine, but we can do something great with this.”

He said these agencies want to “soften the blow for the community,” and that they are willing to write letters to NDEP in support of the town and the projects. He also pointed out that the projects could be spread out over time.

He said his goals were to keep the money in the community, to lessen the pain, and to see if the money spent could be leveraged “into something powerful.”

“Let’s think about this as something that can have a positive impact on the community,” he said.

Board member Rick Johnson said, “I don’t think anyone disagrees that the money should stay here,” and he appreciated that Spicer has projects ready to go and is familiar with the agencies.

“I appreciate your generosity,” he told Spicer.

Member Boyd Madsen said, “All right, Dave. We’re going to lean on you.”

The board voted to notify NDEP that they are choosing the project option over the fine and Spicer said his contacts with the government agencies would help with the wording of the letter.

Some of the projects mentioned as possibilities were clearing noxious plants and weeds, developing the habitat trail project, and rehabilitating springs.