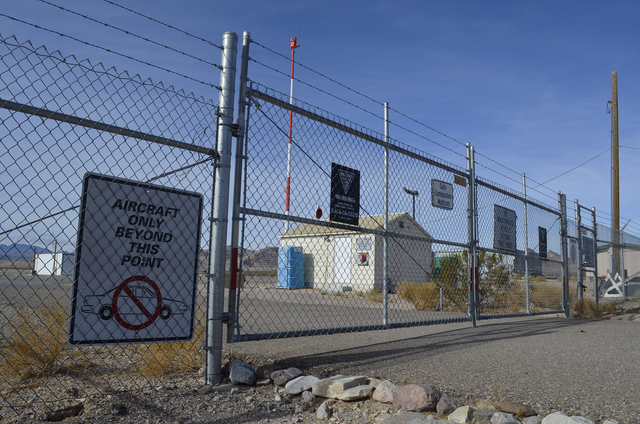 Beatty resident Rupert Bragg-Smith owns 360 acres next to the Beatty Airport. Bragg-Smith said he wants to develop a space where car manufacturers from around the world can showcase their product, but officials said he first has to provide the plans for review. Daria Sokolova/Pahrump Valley Times

When Rupert Bragg-Smith purchased 360 acres next to the Beatty Airport in 2005, he had a vision for providing a space where car manufacturers from around the world could showcase their products.

Bragg-Smith, who calls himself an entrepreneur, has a long history of land ownership in Nye County. He purchased 295 acres from the BLM in Pahrump in 1997, where he built the Spring Mountain Motorsports Ranch.

After selling the Spring Mountain facility, Bragg-Smith purchased 360 acres of land located south of Airport Road that adjoins the eastern portion of the airfield. There he planned to construct a track, hangars, and homes.

“I purchased that 360 acres to provide a testing and what they call ‘a long-lead experience’ for manufacturers around the world. A long-lead means you can showcase new products,” Bragg-Smith said.

“What I wanted to do is to provide a ‘western experience’ for the automotive industry,” Bragg-Smith said.

Bragg-Smith also purchased a vacant store on Amargosa Road in Beatty, which included three parcels of land. He planned the building to be a roadhouse or a gathering place in support of the testing facility.

“I wanted this to be an extension of the track, so people who are at the track during the day could come here at night and we could have social functions here, we could have barbecues, sit at the fire, do whatever you want to,” he said.

As years have gone by, nothing has happened to Bragg-Smith’s land. He said county officials have expressed little interest in working with him to develop the land.

“You’d think that someone owns that amount of land and wants to do some business and help the county, you’d think that they would fall over backward to get to you, and not discourage you from doing business,” he said.

“We have lots of county-owned land at the Beatty Airport,” Lacy said. “We would love to work with anyone who would like to develop in the area. The old brothel next to the highway is now a medical marijuana facility, we hope the recreational vote will lead to more investment and jobs in that industry.”

Nye County Commissioner Lorinda Wichman said she is not aware of any plans that have been brought to the county for approval on the acreage owned by Bragg-Smith.

“Rupert does call county staff and run ideas around but he has never gone through the steps to approve a plan that I am aware of,” Wichman said. “Just because he has an idea doesn’t mean staff can move forward. It is his private property. He has the same opportunities as all other developers in Nye County. He only has to provide the plans for review.”

Also, Bragg-Smith said he invested heavily in the former Napa store in the last 10 years, trying to create a structure reflective of the history of a bygone era.

“I have consistently developed the building with an eye toward serving my future clients, including a beautiful front porch, and provisions for an outdoor entertaining area,” he said in a letter to Wichman.

He argued that Beatty is “the most strategic town” between Las Vegas and Reno.

“Because of Death Valley and its proximity to Las Vegas, (Beatty) has accommodations, and it could have a lot more,” he said.

“If the county has businesses that are looking for land adjacent to the airfield, I am open to discussing. The land has three-phase power and city water,” he said.

As of now, Bragg-Smith said he isn’t sure what’s going to happen with his land that has been sitting without any use for over 10 years.

“If the county is receiving inquiries for business near the airport, perhaps it would be in everyone’s interest that we all work together for the common good,” he said. “I personally have many ideas for this (airport), and I would be very happy to work with the county.”