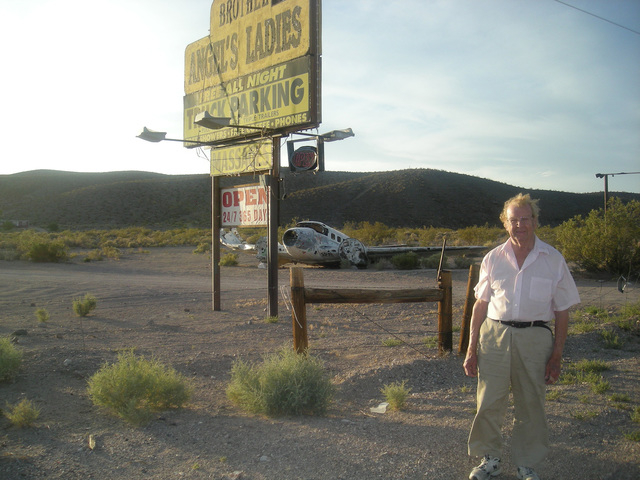 Note: In the Nov. 21 edition of the Pahrump Valley Times we ran an article talking about the growth of the brothel industry in Beatty. This week’s article is a continuation of that story.

In 1986, Lieutenant Gus Sullivan of the Nye County Sheriff’s Office was quoted as saying he couldn’t remember Fran’s Star Ranch causing any real disturbance in the seven years that he had been with the department. “No, it’s not a troublemaker by any means,” he said. As far as the people of Beatty were concerned, it was “just another business. They don’t see it as an eyesore.”

Fran was widely recognized as deeply generous with local charities. She helped found the Beatty Chamber of Commerce and chipped in to purchase new football uniforms for the local high school. Barbara Hart, then Vice President of the Chamber of Commerce said, “She’s integrated into everything the town does.” In 1986 Fran’s asking price for her brothel was $500,000, excluding the land.

Anyone who has driven on U.S. Highway 95 a couple of miles north of Beatty has noted the remains of a twin engine plane on the south side of the highway at the entrance to what used to be known as Fran’s Star Ranch. There’s a story behind the remains of that plane.

In 1978 Fran York announced that she was going to put a mattress in the center of a large star painted in the parking lot of her establishment. She notified pilots and parachute jumpers across the west that anyone who could jump from an airplane and hit the mattress would win a free night at the brothel with the lady of his choice.

On the day of the big event, Fran’s women lined up along the runway dressed in spiked heels and fishnet stockings, g-strings, black lace bras, rhinestone chokers and long capes blowing in the breeze.

A number of planes were in the air that afternoon. One was a twin-engine Beech D-18 with seven passengers on board piloted by a man named Buster. Buster attempted to land his aircraft on the small airstrip located near the brothel. In preparing to land he did all the right things—adjusted the throttle, trimmed the propellers, lowered the landing gear, flaps down.

But as he made his final approach, instead of watching the windsock, which indicated strong crosswinds, his eyes understandably became focused on the beautiful women on the ground and his plane hit a crosswind. Buster attempted to make a correction. As he tried to regain control, he realized too late that in his distraction he’d forgotten to lock his tail wheel down.

As the ladies looked on, the plane touched down, the landing gear gave out and the craft spun toward the edge of the runway where it hit a high post and came to a halt in the sagebrush. Fortunately no one was injured, but the aircraft was a wreck. Buster was later able to salvage the engines and some other parts, but that was all.

Meanwhile Fran noticed an increase in traffic past her brothel to view the wreck and decided to leave the fuselage where it sat. It was good for business.

Late in the day on November 20, 1979, a fire broke out at Fran’s Star Ranch. Although the fire was serious, six prostitutes and two customers escaped injury.

The cause of the fire was never known in detail, but it apparently started in one of the women’s rooms shortly after she and a customer exited it. Nye County Undersheriff Larry Massoli suspected that the fire was caused by an electrical short. The main building was destroyed by the fire and a smaller structure nearby was damaged (Seattle Times, November 22, 1979).

Fran estimated costs of rebuilding the brothel would be approximately $100,000.

A little more than two weeks after the fire, the Associated Press reported the community of Beatty would “do something to help” Fran. A benefit dance was to be held to raise money to assist in rebuilding the brothel. “It’s not only because this is Fran,” Bill Sullivan, Beatty’s Justice of the Peace and Chief of the Fire Department said. “It happens in this area quite a bit.” He explained that when a family is hit by a tragedy, “the town gets together and does something for the people. That’s one thing about a small community.”

Fran York was quoted as saying, “Everybody has been just unbelievable. The night (of the fire, townspeople) took the girls downtown, got clothes for them and a place for them to stay.”

About a week after the fire, Fran was back in business. She moved her six girls into a three-bedroom mobile home that she had set up on the property. A benefit dance to aid in rebuilding Fran’s Star Ranch was organized by Beatty resident Bill Perry and his wife. He is quoted as saying, “Fran’s quite well thought of by the majority of people here. Fran has always been extremely gracious when it comes down to the support of local organizations, or anyone, indeed. I tell you, the amount of money she donates annually to different places, you’d never get that much from the tax structure. She donates a couple thousand dollars a year.”

However, not everyone was happy with the benefit. Judge Sullivan said, “You going to hear pro and con. I’ve heard some statements around that this type of thing shouldn’t be done. I certainly appreciate their feelings but not everybody likes baseball” (Mobile Register (Ala.), Dec. 7, 1979).

The benefit raised about $5,000 to help with the rebuilding. Approximately 400 people were estimated to have attended, more than half the population of the town. There were ranchers, miners, and workers from the Nevada Test Site, along with local teenagers and children down to five and six years of age. Fran sold her autograph for $100 (Oregonian, Dec. 10, 1979) and auctioned off her bra.

Described as a “short, bubbly blonde,” Fran was delighted with the large turnout. “Oh, my God,” she was quoted as saying, as she arrived to the cheers of the crowd. “I can’t believe I have so many friends. It’s unbelievable.” She said she had never seen so many of her customers in one night. Ironically, Fran York had been operating the brothel for eight years, and had only purchased it a few days prior to the fire.

Fran summarized her feelings about the people of Beatty, saying, “I love people and I love the people of this town. If other people would go by the people in this town, it would be a beautiful world. It really would.”

In 1997 Fran York sold her brothel to Mac and Angel Moore, formerly owners of a chain of funeral homes in Oregon. They changed the establishment’s name to Angel’s Ladies Brothel and left the wrecked plane as it was; it had become a landmark. Mac and Angel are active Christians and see the brothel as “a way to help ease suffering.”

As one trucker put it, “It’s a lonely life out here on the road and you need to find a place where you feel welcome.”