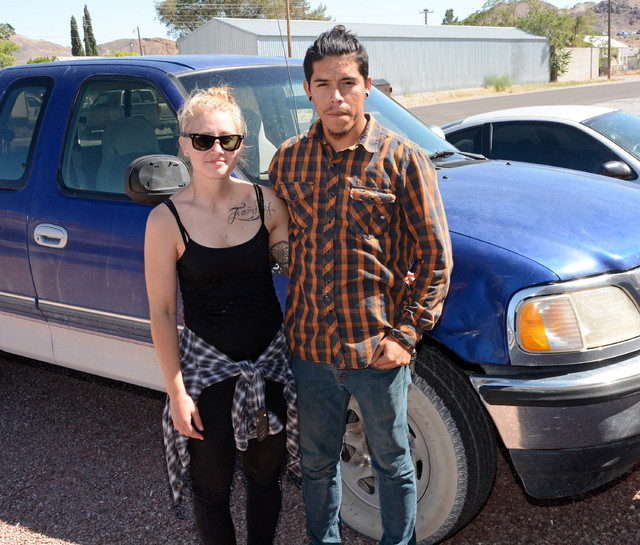 Beatty resident Miguel Mendoza knew he had to risk his own property and safety to help capture an alleged carjacker outside of town.

Mendoza, 23, and his girlfriend Trista Eastman, 21, were on their way out of Beatty on Highway 95 around noon on June 5 when they saw Beatty town secretary Carrie Radomski, 46, lying on the ground by Mel’s Diner.

“She looked like she was in a lot of pain,” says Mendoza. “We stopped, and some people from the diner told us what happened.”

Radomski had given a ride to a stranger who had flagged her down claiming vehicle trouble. When they arrived at Revert’s tire shop, which is next to the diner, Radomski exited the vehicle and motioned for the man to follow her into the business. Instead, he slid over into the driver’s seat. She ran back toward the vehicle and he struck her with it as he fled south on Highway 95 out of Beatty.

“They told us he was an Asian guy, and he’d stolen Carrie’s big blue truck,” said Mendoza, who knew the vehicle well, as his family owns Mama Sara’s Mexican Restaurant, just across the street from Beatty Mercantile, which is owned by Radomski’s husband George.

Mendoza and Eastman continued on their way south on U.S. 95, where he planned to go to Sterling Mine to pick up some respirator cartridges. However, they spotted Radomski’s truck in the desert on the opposite side of the highway from the Big Dune turnoff.

“It looked like he was trying to hide behind the mountains,” said Mendoza.

Eastman called Nye County Sheriff’s dispatch on her cell phone. The dispatcher asked for the license plate number, then told them to maintain visual contact with the truck until deputies could arrive.

“I tried to pick a spot where he was going to come out,” Mendoza said. “He spotted us watching him, and I guess he got worried. He blew through the barbed wire fence he had gone through already. Then he got stuck in the dirt, and I was going to try to get him then, but he got out.”

Mendoza decided to follow the suspect, staying close to the truck’s bumper.

“He was trying to elude me, going into the oncoming traffic,” Mendoza said. “Then he came back onto the right side and slowed down. I seized the opportunity and hit him on the left side and got him to stop.

“The reason I hit him is that I didn’t want to put anyone else in danger because he was swerving on both sides of the highway.”

Mendoza and Eastman said that all during the chase, the driver, later identified as Lea Meng Che, 29, from Brampton, Ontario, Canada, kept reaching into a bag. They thought he might be tossing drugs out the window or trying to make them think he had a gun to scare them off.

After Che stopped, Mendoza said he was about to get out of his truck to go after the suspect when deputy Alan Lynn arrived and made the arrest.

According to the Nye County Sheriff’s Office, Che voluntarily told deputies that he had stolen cars in Las Vegas, and they found that the car he had abandoned in Beatty when he got a ride from Radomski was stolen.

Che also reportedly told the deputies that he had luggage at McCarran International Airport that contained something that would “harm a lot of people there.” This triggered notification of the Southern Nevada Joint Terrorism Task Force.

Radomski was taken to the hospital to be evaluated and treated for her injuries. The next day she said she was doing okay with “a dislocated shoulder, broken humerus, and a banged-up foot.”

On Tuesday, Che remained in custody on numerous felony charges in the Nye County Detention Center in Pahrump on $22,000 bail.