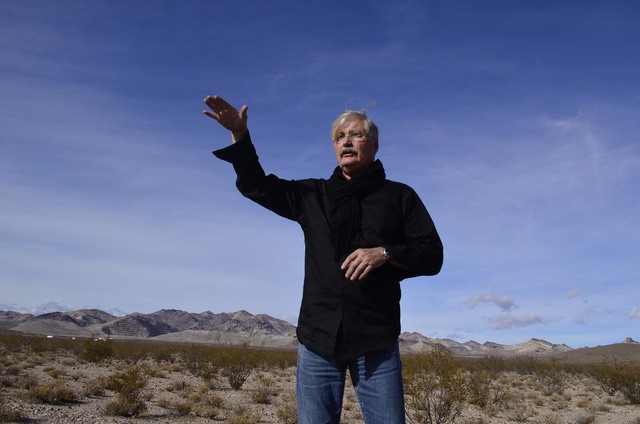 Beatty resident Rupert Bragg-Smith got into a heated exchange with members of the Beatty Town Advisory Board on Dec. 19 regarding a request by Bragg-Smith to request a dark-sky ordinance from the county, a request the board declined to forward. Daria Sokolova/Pahrump Valley Times

Beatty resident Rupert Bragg-Smith got into a heated exchange with members of the Beatty Town Advisory Board at their Dec. 19 meeting.

Bragg-Smith had placed an item on the board’s agenda requesting that they relay a request to the Board of County Commissioners for the adoption of a dark-sky ordinance throughout the county.

Bragg-Smith, who lives in the former NAPA Auto Parts store, which he had remodeled with an Old West theme and proposed to turn into a bar-restaurant, is seeking relief from the lighting from the new Family Dollar store across the street, which he considers a nuisance and health hazard.

He came before the board at their previous meeting and asked that the county plant trees along the easement to block the light, or that they pass a dark-sky ordinance.

The board did not think the request for trees was practical because the county probably would not fund it, and the trees would take too long to grow to a height that would block the lights.

They were critical of what they said was Bragg-Smith’s lack of diplomacy in dealing with Family Dollar. The board said it could write a letter to the company asking that they shield their lights, but he would have to put it on an agenda as an action item for them to do so.

The board did not favor the new proposal for a countywide ordinance.

“We’ve tried very hard not to be under countywide ordinances,” board treasurer Erika Gerling said. “They paint with a broad brush. What fits Pahrump doesn’t necessarily fit other communities.”

Gerling also said that if a new ordinance was passed, it would not affect the established business and would not solve his problem.

“I don’t want anyone else to have to go through what I’ve gone through,” Bragg-Smith said. “I’m facing a real traumatization, and nobody cares.”

Bragg-Smith said he could not see why anyone would oppose a dark-sky ordinance. “You’re so negative. You don’t want a positive.”

He accused board Chairman Dick Gardner of lying because Gardner said he had gone down at night to check out the lights and that the shadow line from the lights was in the road before reaching Bragg-Smith’s property.

Marty Campbell said he had gone to check the lighting out the night of the last meeting, and that he could see his shadow on Bragg-Smith’s truck parked in front of the property.

Bragg-Smith said that Valley Electric Association lineman Danny Rogers had looked at it and “thought the lights are quite ridiculous.”

Gerling said that Bragg-Smith had not done what was agreed upon at the last meeting, submitting the agenda item for them to send a letter to Family Dollar.

Gardner said that if they were to send the request for the county-wide ordinance to the board of commissioners, it would indicate that the board supported it, “and we don’t.”

Bragg-Smith said that he had referred the matter to his lawyer.

The rest of the meeting was uneventful. With the exception of the Beatty Economic Development Corporation, none of the other town boards or organizations gave any report.

As for the development corporation, Albert Verrilli told the board that he had taken a course at UNLV on 501c3 nonprofits and that he learned a lot of valuable information. He felt that other such organizations in the community could benefit from the training.