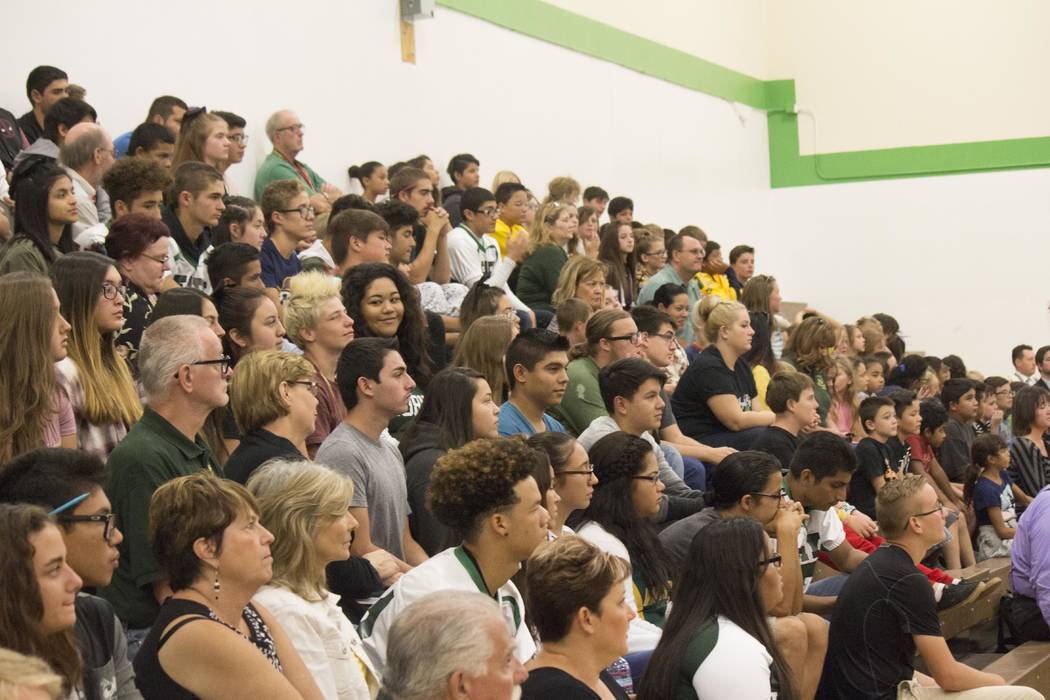 Jeffrey Meehan/Pahrump Valley Times Students gather at Beatty High School gymnasium where Valley Communications hosts an event welcoming Beatty as the first in the state to be an all fiber-optic community on Sept. 15, 2017. VCA was joined by its executive team, Gov. Brian Sandoval, Nye County School district leaders and others to welcome the new service that is set to be in place by the end of 2017. 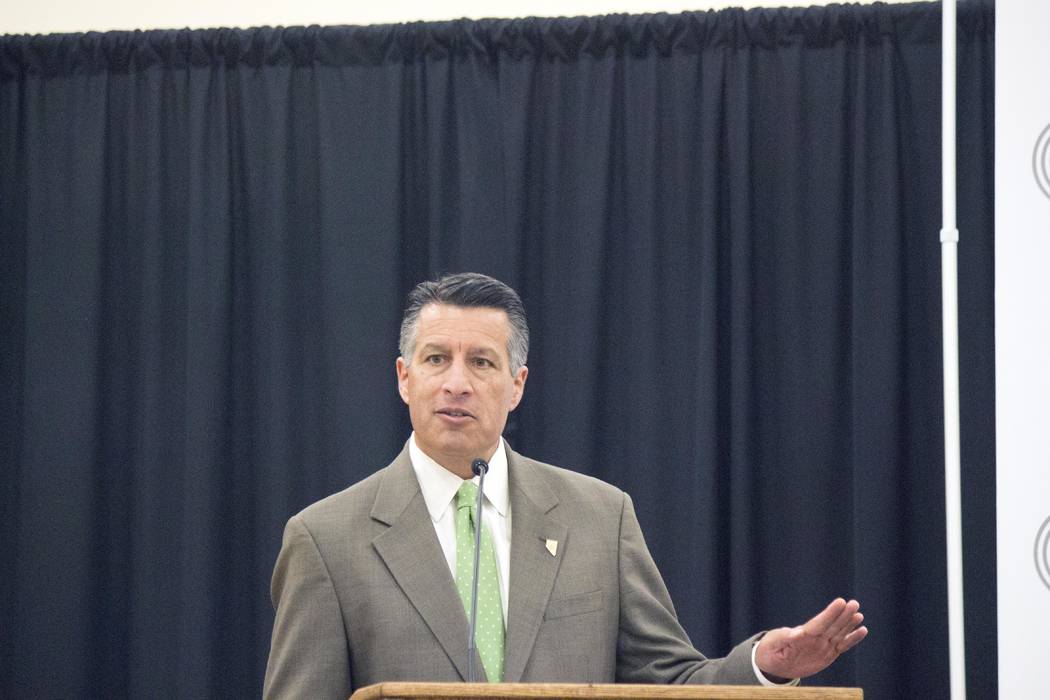 Jeffrey Meehan/Pahrump Valley Times Gov. Brian Sandoval speaks during an event at Beatty High School welcoming Beatty as the first community in the Silver State to be on all fiber-optic lines for its internet connection on Sept. 15, 2017. Sandoval spoke on the positive advantages Beatty could have in health care, education and small business. 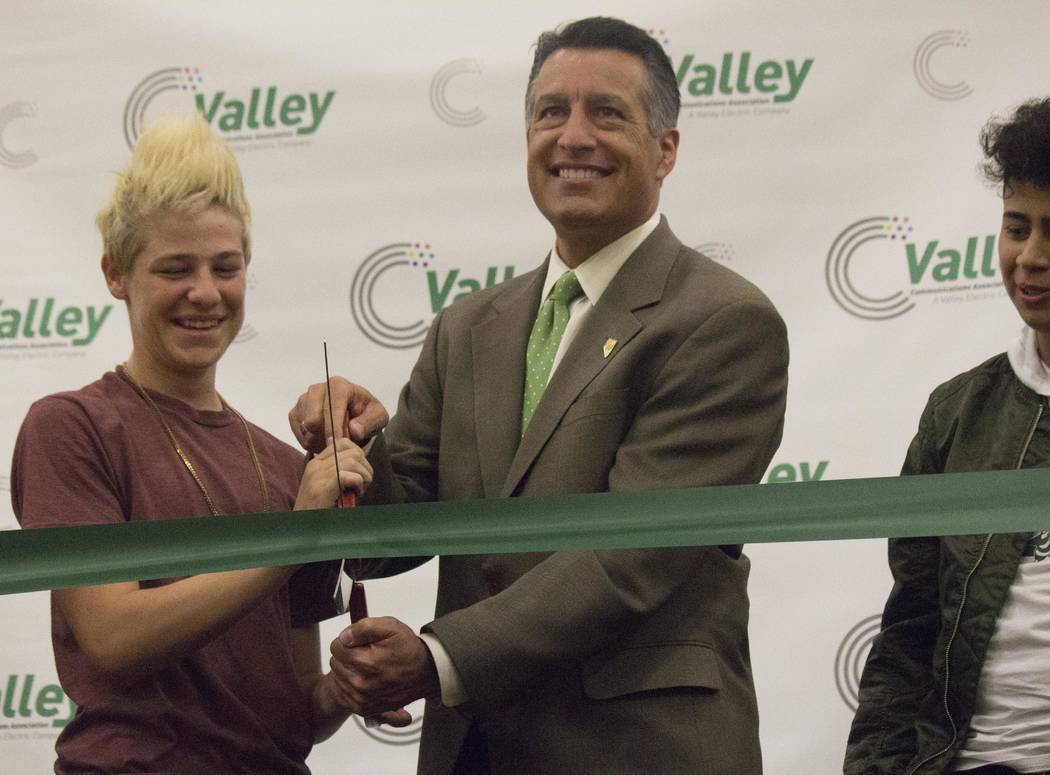 Jeffrey Meehan/Pahrump Valley Times Gov. Brian Sandoval cuts a green ribbon during an event at Beatty High School recognizing the town to be the first all fiber-optic community in Nevada on Sept. 15, 2017. The two unidentified students were chosen from the audience to assist in the cutting of the ribbon. 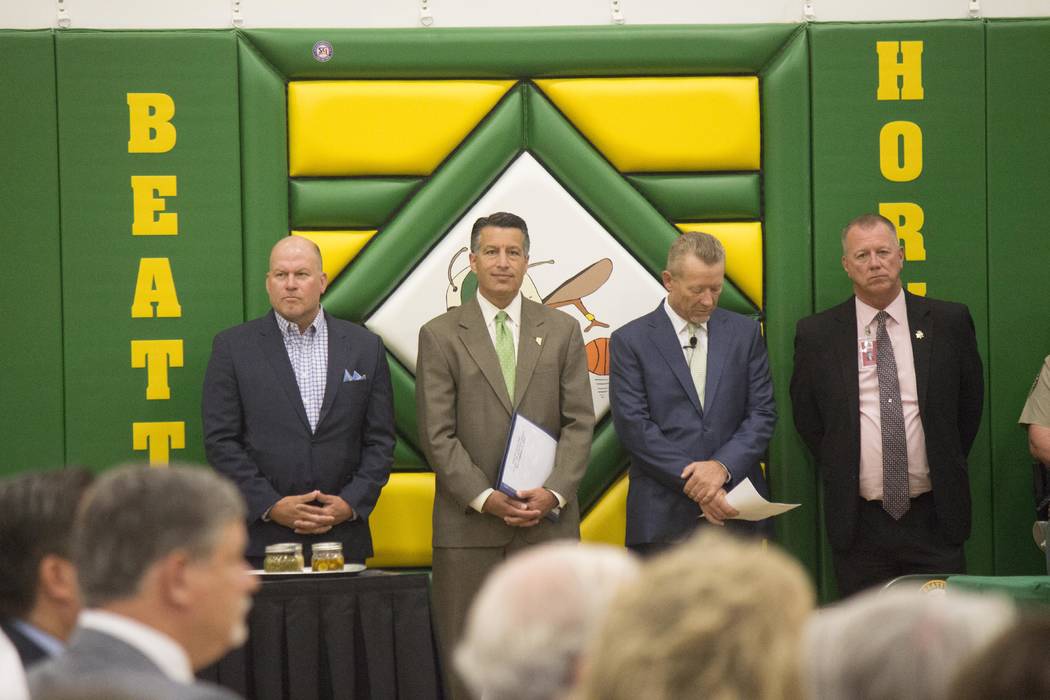 Jeffrey Meehan/Pahrump Valley Times Beatty is pegged to be the first all fiber-optic community by the end of 2017. A ribbon-cutting event was held by Valley Communications Association on Sept. 15, 2017 to mark the upgrade. The event's keynote speaker was Gov. Brian Sandoval. 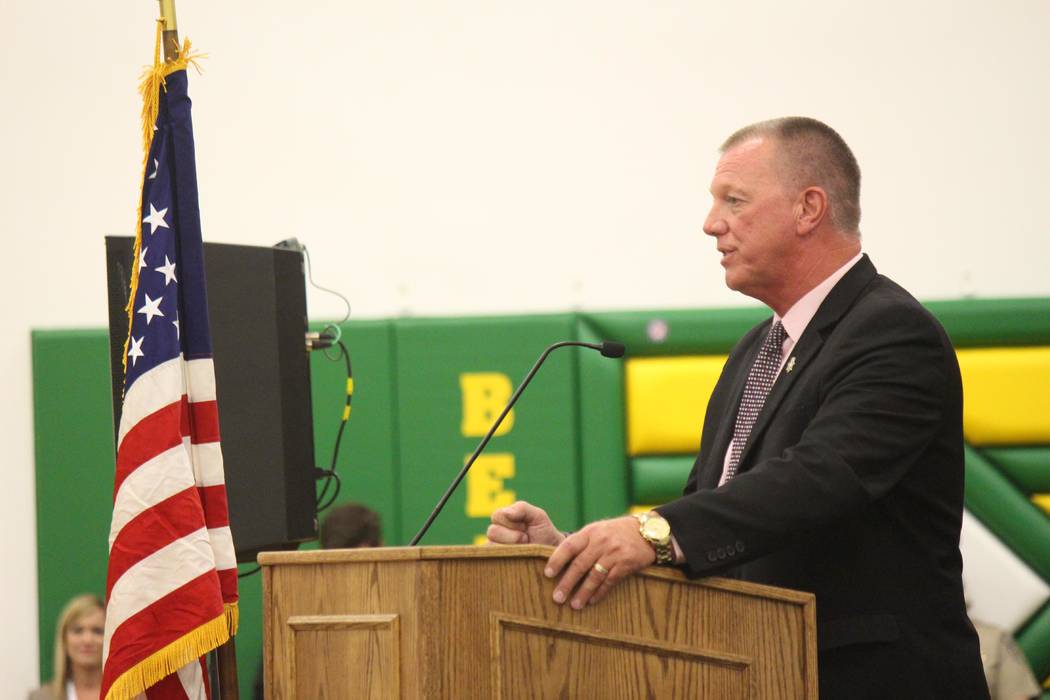 Jeffrey Meehan/Pahrump Valley Times Dale Norton, Nye County School District superintendent, speaks about what being an all fiber-optic community will mean for education and the school district at a ribbon-cutting event on Sept. 15, 2017. Valley Electric, which headed the event, plans to have the lines in place by the end of 2017 through its subsidiary, Valley Communications Association.

BEATTY — Nevada Gov. Brian Sandoval joined leaders of Valley Communications Association, Nye County School District and others packed the gymnasium at Beatty High School to announce the town will be the first all-fiber community in the Silver State.

“What matters to me is that regardless if you live in Beatty or in Las Vegas or in Reno or in all those other communities, that you have that same access to information and opportunity that every child in the state has,” Sandoval said during his keynote address at Beatty High School at 1 Hornet Ave. on Sept. 15, 2017.

Dozens of kids, state and local leaders and others are learning how getting information faster will help Beatty and other rural areas in the state. Beatty is on course to have an option for all of its citizens by the end of 2017.

During his address, Sandoval pointed to health care, education and small business as areas that could see improvement in Beatty.

Valley Communications Association, a subsidiary of Valley Electric Association, was responsible for laying the fiber-optic lines.

The health-care options for Beatty residents could be improved through telemedicine, which is defined as the practice of medicine by way of two-way voice and visual communications.

“This will allow all of you out here to have access to telehealth and have that connectivity to medical providers that you didn’t have before, so that you don’t have to take that big long drive to get the health care that you may need,” Sandoval said during his address.

This type of health-care communication has been growing in the state, through this and other initiatives, at both the medical facility and the individual level.

Insurers such as Anthem Blue Cross and Blue Shield in Nevada launched telemedicine services to its insured just a few years ago. Anthem’s service, known as LiveHealth Online, is also available to anyone with an internet connection in Nevada.

Users pay a fee, under $50, and are connected to a doctor for nonemergency issues such as prescription refills and other medical ailments, if they aren’t insured through Anthem.

Medical facilities, such as Desert View Hospital, use fiber-optic connections, made possible through partnerships with Switch Communications and the Nevada Hospital Association.

The facility uses the technology to communicate with specialists in surrounding areas such as Las Vegas, possibly saving time to transport patients because information can be shared quickly, according to Susan Davila, CEO at Desert View Hospital.

“Economic development opportunities will avail themselves because businesses not only want to, businesses need to, businesses must have high-speed communications in order to survive today,” Husted said.

Not only is high-speed internet a positive for local business growth and local patrons, but it can allow businesses to expand beyond local borders.

Education could be positively impacted.

“Any further education that kids can get outside the classroom, or in the classroom for that matter, will help,” Norton said during his address at the event.

One thing that many Beatty students will be glad for is uninterrupted testing.

The school is already hooked up to the fiber-optic connections that the rest of Beatty citizens will have the option of purchasing by the end of 2017, according to a news release from Valley Communications Association.

Students will also have access to information on the internet that might not have been previously available.

Pahrump next in line

The installation of a fiber-optic connection in the Beatty area started some time back with a partnership with Switch Communications, a large-scale data storage company, and Churchill County Communications in Fallon, along with Valley.

In 2012, Switch began construction on more than 450 miles of high-speed communication lines from Las Vegas to Reno, which mostly parallels U.S. Highway 95.

That collaboration is allowing for the fiber-optic communications growth in places such as Beatty, Amargosa Valley, Yerington, Hawthorne and other rural places in the state.

According to Ken Johnson, executive vice president of broadband services at Valley Electric, Pahrump is next on the radar for fiber-optic lines.

Johnson said the association also wants to expand the system to its current service area, which, on top of Beatty and Pahrump, includes Amargosa Valley, Sandy Valley and Fish Lake Valley.

Valley plans to spend roughly $100 million for its fiber build-out in its service area, which includes Beatty.