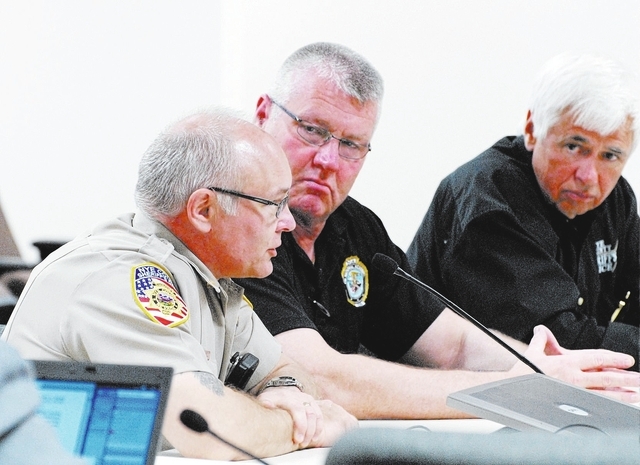 Becht worked for the NCSO for more than 24 years before retiring from the force in September.

During his long career in law enforcement with the county, Becht was responsible for implementing the K-9 unit and Special Weapons and Tactics, or SWAT, teams for the sheriff’s office as well as supervising multiple areas in both the northern and southern parts of the county.

Becht recently sat down with the Pahrump Valley Times to discuss his run for sheriff.

Q: You retired from the force last year, what made you decide to come back and run for sheriff?

A: It’s the right thing to do. I’ve told everyone, promised everyone, I’m not going negative, or running a negative campaign. It’s about what I can do for the people and what I can bring to the table for the office. So my decision to run for sheriff is my belief that I’m the best man for the job.

Q: Having served as an administrator for the NCSO in the past, do you think that knowledge and experience would be a benefit to you if elected sheriff?

A: Absolutely, like I said I believe I’m the best person for the job because of my experience.

I’ve dealt with the budget, when it came to budget constraints I’ve found ways to make my budget stretch further to help other areas of the county out, I’ve been involved in county-wide programs with the K-9 teams, SWAT teams, and so on and so forth.

I’ve worked in all the areas of the county, I was stationed in Tonopah and then Pahrump, and while I was never stationed in Beatty I worked in that area before. I was responsible as a sergeant in Tonopah for the rural areas, I took care of Gabbs, Smoky Valley, Duckwater and every place in between.

Q: Do you think there needs to be any changes made to the way the department operates now?

A: There needs to be some restructuring done. Too many people use the phrase, there has to be accountability, there have to be ethics. There is accountability and there are ethics. But can the system be improved? Can it be revamped? I believe so, and I believe I’m the person to do it.

Q: What kind of changes would you make to the department if elected?

A: Improve relations with the communities, and the word may be over-used, but I really believe in it, transparency. You’ll never have 100 percent transparency because of some of the laws that get in the way of that with privacy issues and things like that, but there’s no reason why an honest question shouldn’t receive an honest response. Even if that response is nothing more than I can’t discuss that with you because of privacy issues, or the law, or whatever, at least you understand why I can’t discuss it.

That’s one thing as far as my personal campaign, if someone contacts me with a question or wants to know my opinion, within 24 hours they’ll have a response.

Over the years I’ve told people I’m not here to make you happy, I’m here to give you the best answer possible and to be truthful. And most people understand that and appreciate that. You just have to work with the people and understand you’re working for the people of Nye County.

Q: Would you like to see more technology used in the sheriff’s office to help deputies with their duties?

A: I certainly believe there are things that can be done technology wise.

Communications is a big one. I don’t believe that just within the county, but all over. I was involved with getting the state-wide CAD (computer aided dispatch) system set up. And that’s all interoperability and communication between all the agencies. Within certain restrictions, all of the agencies can now see what the other agencies are doing through the CAD system and the dispatch system.

That’s huge because now I don’t have to wait if I want to know what someone is doing in Henderson, if Henderson had anything on a certain suspect. Instead of going I don’t know if the suspect has ever been there, I can do a CAD search and see what other agencies have issues connected to this person and we can start building ties.

The LeadsOnline program we got that off the ground and that’s huge too. The technology is out there and we should take advantage of it if it makes peoples’ jobs easier. It’s not just a matter of making it easy for them, but making them more effective.

Q: Is there anything else you would like people to know?

A: PRIDE, the acronym, is my slogan. Professionalism, respect, integrity, dedication and excellence. And I believe in all of those principles and that we should all strive to be better at all of those.

For more information on Becht’s campaign or to contact him calls and texts can be sent to 775-764-1223 or visit https://www.facebook.com/bechtfornye.