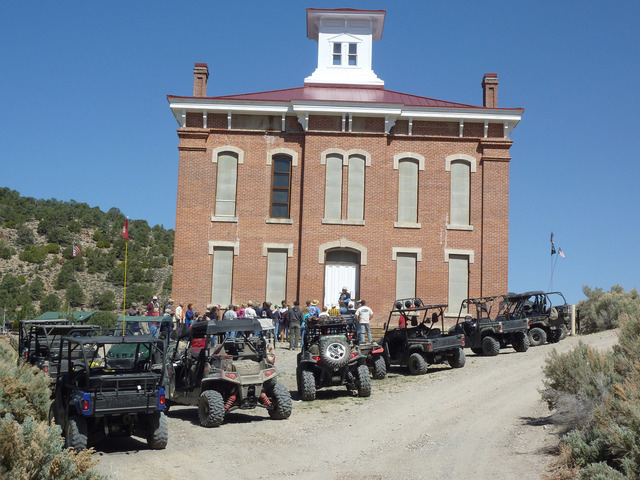 TONOPAH — Communities throughout Nevada will hold Fourth of July parades and fireworks, but in the former Nye County seat of Belmont, it’s one of two holidays throughout the year where advocates raise funds to restore the historic courthouse there.

In May 2013 Gov. Brian Sandoval signed Senate Bill 121 passed in the 2013 Legislature, transferring the historic courthouse from the Nevada Division of State Parks back to Nye County.

The Division of State Parks re-roofed the building, built in 1876. The volunteer group Friends of the Belmont Courthouse are leading a drive to do more repairs. The courthouse was placed on the National Register of Historic Places in June 1972.

Belmont was the county seat from 1867 to 1905, when Tonopah earned that designation.

Bill sponsor State Sen. Pete Goicoechea, R-Eureka, told the Legislature a lack of state dollars and the remote location made Nye County and the Friends of the Belmont Courthouse better suited to raise funds to maintain the building than the state parks division. His prediction came true with impressive results so far.

District Attorney Brian Kunzi said the Friends of the Belmont Courthouse put together a plan to restore the windows, selling 26 of the 30 windows, which raised $73,000 in 14 months. The windows are being restored in a way that’s acceptable to state historical organizations, he said. After the roof was completed, the doors and windows have to be replaced to protect the building from the elements.

Donna Motis, president of the Friends of the Belmont Courthouse, said they sold four more windows over the Fourth of July this year, at $3,000 each. She estimated there were easily more than 400 people in town. Events included typical Fourth of July fun like a barbecue, watermelon eating contest, wheelbarrow race, art show, flag ceremony and a parade. The art show auction raised an additional $6,400.

“We’re almost all out of windows. That’s how good we’re doing,” Motis said. “Our next project is to work on the outside doors and then the inside doors.”

“If people want to participate and want to memorialize somebody on the window we can certainly do that,” Kunzi said.

Other repair work already completed on the structure, which was originally built at a cost of $34,000, include replacing stairs, painting exterior woodwork, replacing the cupola as well as performing a seismic retrofit.

The Friends of the Belmont Courthouse have 31 life members and 18 family/friend memberships. The group has raised another $15,000 from T-shirt sales, mug sales and courthouse tours, the DA said.

Motis said they sold at least eight more life memberships in the Friends of the Belmont Courthouse over the Fourth of July at $250 for an individual and $350 for a family; annual memberships are $25 for singles and $35 per family.

During a presentation under announcements at the Tuesday county commission meeting, Kunzi urged county officials to make it up to Belmont for their other fundraiser over Labor Day weekend if they can’t visit over the Fourth of July.

Belmont is 45 miles north of Tonopah, or about 210 miles north of Pahrump. It is a national historic district with numerous old structures still standing from the silver mining days. Belmont is located in the pinyon pine country at a cool 7,500-foot elevation.