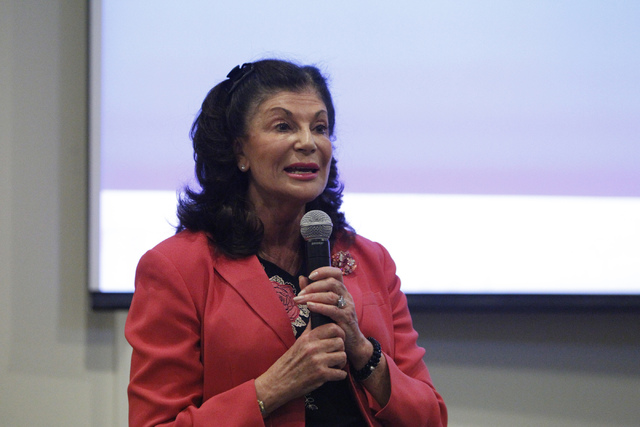 Berkley said that the state tax money used on the medical school in Reno should then be redirected to the state’s floundering K-12 public education system.

“Now we have a medical school up in Reno that is costing the taxpayers anywhere near $50 million to $60 million a biennium to keep it open,” Berkley said on the show recently.

“We now have a new medical school — just started this year — at UNLV. I think that it is going to take hundreds of millions of dollars to get UNLV completely successful,” Berkley said. “And it should be. It is my alma mater. I support a medical school at UNLV.

“I do not see how the state can sustain two medical schools with the costs being so high,” she said.

Earlier this year in an interview with KNPR radio, Berkley also said the medical school in Reno should be shut down. She said it is an opinion she has had since she was a member of Nevada’s University Board of Regents more than 20 years ago.

“This was my opinion when I served on the Nevada Board of Regents and that was a good 20-some years ago,” Berkley said. “So what I said (on KNPR) was not anything different than what I said when I was on the board of regents. I was not attempting to be controversial. I was asked a question so I answered it. But that is my opinion. And again, I would like to see the money spent on K-12, consolidate the two medical schools into one and provide services for all Nevadans.”

Lobbyist Marlene Lockard, speaking on the pundit panel, said she was wary that Berkley’s comments could reopen the North vs. South rivalry at the Nevada Legislature. With much of the state’s population, tax base and economy in the Las Vegas area, it is a battle the North won’t win, many Northern Nevada lawmakers have said over the years.

“Once again, that kind of discussion opens up the whole north/south business,” Lockard said.

“I hope we don’t get too deep into that (debate about two medicals schools in Nevada), unless it serves some function where we are going to get more docs produced at a better rate, highly qualified docs,” Amodei said.

Nevada has faced a shortage of doctors for decades. Nevada has an average of 198 doctors per 100,000 residents, according to 2010 data from the U.S. Centers for Disease Control and Prevention. The national average is 272 per 100,000, according to the CDC.

If the debate is about producing doctors for Nevada, then efforts should be focused on medical residency programs, not closing the Reno medical school, said John Sande IV, lobbyist for Argentum Partners.

“We need every single doctor we can (get),” Sande said. “If anything, we should invest more into residency programs. I don’t know the exact statistics but an overwhelming majority who do their residency at a hospital or a school, end up staying in that community. So if we really want to keep doctors here, we should be looking at more residency programs rather than closing one school and sending those students somewhere else.”

An argument can be made for a single medical school in Las Vegas based on population, she said. Nevada’s population is estimated to be about 2.9 million in 2017, with more than 2.1 million living in Clark County, which includes the Las Vegas area.

“In the case of education, when we fund education programs dramatically and demonstrably less than the national average,” Berkley said. “We need to take a look at our priorities and determine where our hard-gained tax dollars are going.

“And rather than supporting two medical schools in the state of Nevada, they should be consolidated to one medical school down south where the population is. We should spend that extra money that we are spending for UNR’s medical school by redirecting it to our K-12 program for our youngsters north and south, east and west.”