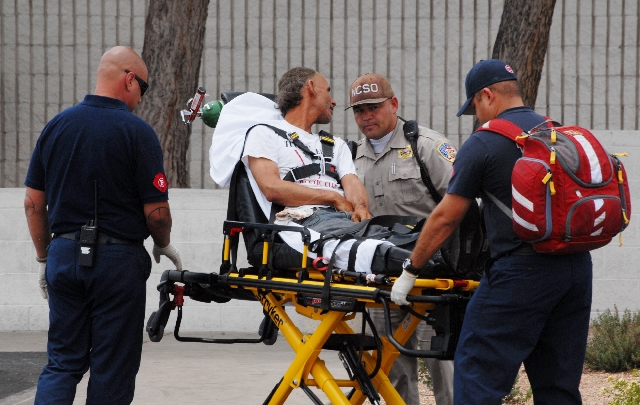 As summer months bring warm temperatures back to Pahrump, so too do risks for heat-related illnesses return.

Local medical professionals say the desert heat, combined with inadequate fluid intake, can be dangerous for those spending long periods of time outdoors or away from cool, shaded areas. This is especially true for seniors and children.

“There are mild heat problems where you have to cool off, we have moderate heat problems where you start to become dizzy, nauseated, weak, feeling very poorly and dehydrated and then you have severe illness where you can have seizures and you can die. So it comes in different strengths depending on where you’re at,” Dr. Stephen Andracki, of HealthCare Partners of Nevada, said. “Mild heat disease is when you are hot. When you’re hot you need to get cool and that means you need to go in and drink water. When you have moderate heat problems, it’s more of a severe problem you have to know when to get cool, but you also have to start drinking more water. The problem is that you can get nauseated, you can get vomiting and it’s tough to treat. So when you’re getting to the point where you’re having problems keeping fluids down, at that point it’s become an emergency and you need to most likely seek medical help. Major problems are you could become unconscious and stop sweating and you can have convulsions, your kidneys can shut down and basically your temperature rises so high that you start to kill parts of your body, including your brain.”

Heat-related illnesses come in two forms: heat exhaustion, the less critical of the two, and heat stroke, which is often fatal.

“Symptoms that it’s progressing and becoming more serious are confusion, change in the level of consciousness and seizures, which are also the symptoms of electrolyte imbalance,” she added.

Heat stroke is characterized by an extremely elevated temperature, unconsciousness or other life-threatening condition.

Dr. Anthony Carrozza, an emergency room physician at Desert View, said heat stroke is by far the more dangerous of the two conditions.

“Heat stroke on the other hand is extreme hyperthermia with temperatures of up to 108 or 109 degrees. It causes organ dysfunction and has an extremely high mortality rate. Heat stroke is luckily very rare, even out here in the desert,” he said.

“We actually see a fair amount (of heat exhaustion). We have one weekend we see more of them and that’s the (Baker to Vegas) weekend. We see a lot of heat-related illness at that time,” Carrozza said.

Among tips local medical professionals say can keep people healthy and out of the hospital during the warm summer months, none is more important than staying hydrated.

“Drinking fluids is the key — if you just drink like a half-a-cup every fifteen minutes of either water or Gatorade, that will help,” Cipollini said. “Taking shade breaks, avoiding heavy exercise outside in the middle of the day if possible and making sure kids who are out at sports practice or playing outside actually drink there water will help too.”

Andracki said also having a plan in place to find shade or cool shelter if the air conditioning goes out or is unavailable, is also important in keeping people healthy in the heat.

If it appears as though someone is beginning to show signs of dehydration or a possible heat-related illness, Cipollini said it is important to get them out of the sun and rehydrated as soon as possible.

“If you think someone is suffering from heat exhaustion move them to a cooler location, lie them down and loosen their clothing, apply cool wet cloths, especially to their groin and armpit area and encourage them to sip water,” she said.