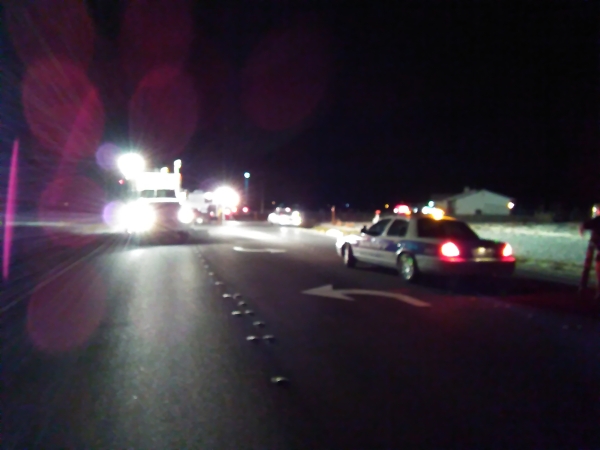 Dark clothing and low visibility are believed to have contributed to a fatal auto/pedestrian collision early Tuesday evening.

Chief Scott Lewis said an unidentified male died at the scene after being struck by a van. The name of the deceased has not been released by press time by the Nye County Sheriff’s Office.

“It was unknown whether the patient was still breathing, but on arrival we in fact found the patient had not survived the impact,” he said. “The fire department then provided an apparatus for additional lighting to the fatality team from the Nye County Sheriff’s Office.”

Lewis also said individuals should make themselves as visible as possible when walking or riding along local roadways.

“The important take-away here is, if you’re going to be riding a bicycle or walking after dark, wear light-colored clothing and have some kind of warning lights on both front and rear of the bicycle,” he said. “If you’re walking, you’ll want to carry a flashlight and wear reflective clothing.”

Lewis also noted, that due to a lack of street lighting along many valley roadways, pedestrians are nearly invisible to motorists.

“They just can’t see them because we don’t have a lot of illuminated roadways,” he said. “I can’t tell you how many times along Pahrump Valley Boulevard that people are riding down the road and you can’t see them until you’re right up on them.”

Another dangerous element, Lewis noted, is the absence of bicycle paths in the community.

“I can recall at least six to maybe a dozen serious accidents in the last several years,” he said. “There are very few bike paths along the roadway for riders and bicycles don’t do well on the shoulder because it’s all gravel. It doesn’t just involve bicyclists, because there’s been incidents where it’s simply a pedestrian walking down the street. We’ve seen them on mopeds and other types of motorized modes of transportation.”

The Nye County Sheriff’s Office has yet to release details on their investigation.