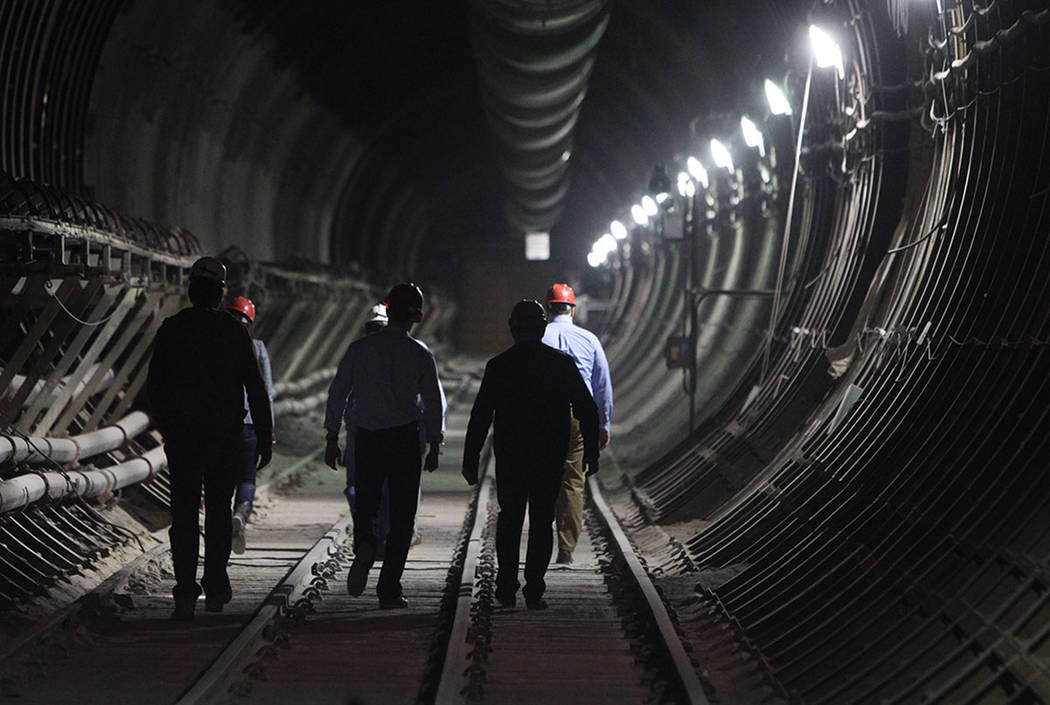 Department of Energy employees and members of the media walk toward the south portal entrance during a tour of the Yucca Mountain exploratory tunnel in 2015. (Las Vegas Review-Journal)

WASHINGTON — Legislation to extend federal whistleblower protections to Department of Energy and Nuclear Regulatory Commission employees nationwide, including more than 3,300 in Nevada, was filed in the House and Senate Friday.

Nevada Gov. Steve Sisolak added his support to the bills filed by Sen. Tammy Duckworth, D-Ill., and Rep. Steven Horsford, D-Nev., to give protections to agency employees that currently cover the employees of federal contractors.

Sisolak said that agency employees “work under physically challenging conditions and in close proximity to hazardous substances and radioactive materials.”

“These employees’ abilities to call attention to dangerous situations must be protected,” Sisolak said in a letter to Duckworth and Horsford.

Horsford, whose congressional district includes the Nevada National Security Site and the proposed Yucca Mountain nuclear repository, said DOE and NRC employees “must know that they have protection under the law in order to hold their agencies accountable, without fear of retribution.”

The legislation would extend protections to about 3,375 employees the Energy Department and the Nuclear Regulatory Commission, roughly 1,800 who live in Nye County and 1,575 workers who reside in Clark County.

Under current law, only employees of Energy Department contractors are protected by whistleblower laws, and only workers for a licensee of the regulatory commission are covered, but not employees or contractors, according to Horsford.

If a whistleblower complaint is brought by an employee of one of those agencies, the government can simply have them dismissed by asserting sovereign immunity.

The legislation in the House and Senate would provide a technical fix to expand the protections.

But previous efforts to amend laws were never enacted.

A 1996 report by the General Accounting Office, now known as the Government Accountability Office, found a raft of unethical conduct by managers, employees and contractors at the Energy Department’s Yucca Mountain project.

The report noted that despite the rampant misconduct, the Energy Department was slow to respond and take action and address conflicts of interest and cronyism.

Other incidents reported by employees were met with intimidation by supervisors, prompting then-Nevada Sens. Harry Reid, a Democrat, and John Ensign, a Republican, to draft legislation in 2003 to tighten whistleblower laws.

And Congress tried unsuccessfully to expand the protections in 2005 with attempts to amend the Energy Reorganization Act of 1974.

The bills filed by Duckworth and Horsford would be another attempt to extend the protections that would affect roughly 14,000 Energy Department workers at sites nationwide.