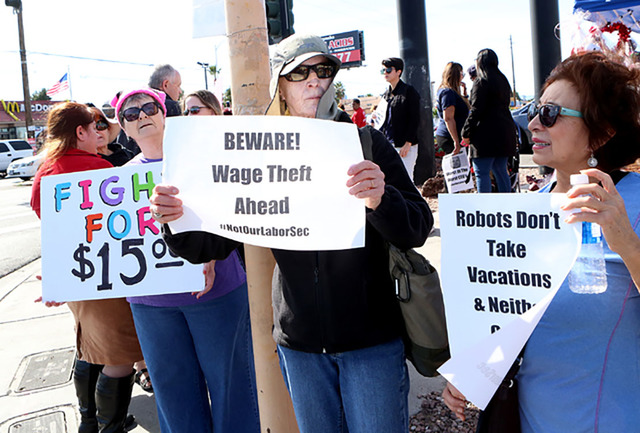 Residents and workers join a fighting for minimum wage protest outside a fast food restaurant in Las Vegas on Monday. A bill was introduced at the state Legislature that, if passed, would raise the minimum wage to $15 per hour. Bizuayeh Tesfaye/Special to the Pahrump Valley Times

CARSON CITY – A proposal was introduced Monday in the Nevada Legislature to nearly double the state’s minimum wage to $15 per hour.

Minimum wage is $7.25 per hour if an employer offers health insurance and $8.25 if no insurance is offered.

McCurdy’s measure would raise the minimum wage by $1.25 per hour, per year, until it reaches $15 by 2022 if an employer does not offer health insurance, or $14 per hour if insurance is offered.

A bill pending in the Senate seeks a gradual increase of 75 cents per hour each year until it reaches $11 per hour with insurance or $12 without insurance.

McCurdy said nearly 300,000 Nevada workers would see a raise under his bill.

“Raising Nevada’s minimum wage is an important step towards bridging the widening gap between income and opportunity inequality,” McCurdy said in a statement. “Local businesses, our state’s economy, and, most importantly, everyday Nevadans will benefit from a pay raise.”

The proposal will generate opposition from small employers and businesses, who in the past have argued that raising the minimum wage will force them to reduce their workforce or raise prices.

A hearing on AB175 is scheduled Wednesday before the Assembly Committee on Commerce and Labor.