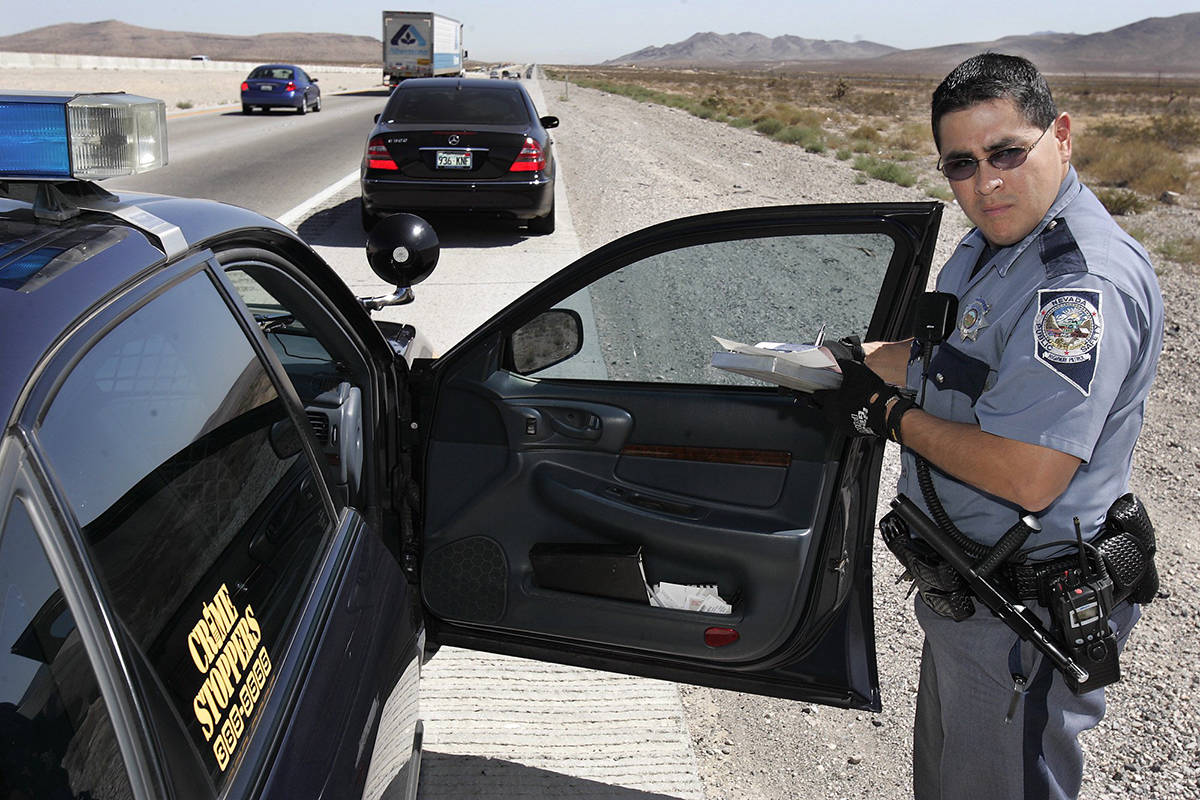 A Nevada Highway Patrol trooper writes a speeding ticket along I-15 south of Las Vegas in a 2004 Review-Journal file photo. (Las Vegas Review-Journal)

CARSON CITY — There would be no more need for police officers in Nevada to meet any end-of-the-month traffic ticket quota under a bill up for debate Thursday in the Legislature.

Also Thursday, all nine Senate Republicans signed onto legislation that would roll back changes in voting procedures enacted in response to the coronavirus pandemic and tighten rules for voter identification, absentee and mail voting.

The move is similar to those by Republicans in other states to enact new restrictions on voting. With Democrats controlling both legislative chambers in Nevada, the bill’s chances of advancing are negligible.

The ticket quota bill, Assembly Bill 186, would bar police departments from requiring officers to issue a specific number of traffic citations or or make a certain number of arrests. It would also prevent the agencies from considering the number of citations given or arrests made by officers when evaluating their performance. The bill was heard in the Assembly Government Affairs Committee.

“Their use damages the integrity of law enforcement and communities throughout Nevada,” Nguyen said.

Lobbyists representing police departments and law enforcement officials said during the hearing that they do not have any quotas for officers.

But Eddie Ableser, a lobbyist for the Nevada Police Union — which represents Nevada Highway Patrol officers, state game wardens and officers for the state parks and universities — said some officers are still evaluated based upon their arrest or ticketing metrics. The union supports the bill banning quotas.

He noted one unnamed state trooper who led the shift in crashes investigated, DUI arrests and calls for service but was reprimanded by supervisors for having the fewest number of citations.

“That trooper left that disciplinary meeting and gave a citation to the first person they caught speeding,” Ableser said. It was a senior citizen who was on her way to the hospital for a family emergency, Ableser said.

Chuck Callaway, a lobbyist for the Metropolitan Police Department, said his agency supports the intent of the bill and does not use quotas but opposed the section that prevents departments from using those metrics in officer evaluations.

“Although we don’t have a quota and we’re not telling him to write an X number of tickets, a supervisor needs to be able to have that conversation with employees that they need to get out and address crime that is occurring,” Callaway said. “And often that requires citations to be written and arrests to be made.”

The committee took no action on the bill. Additional sponsors include Democratic Assembly members Howard Watts, Cameron “C.H.” Miller, Sarah Peters and Edgar Flores, and one Republican, Assemblyman Tom Roberts, who retired as an assistant sheriff from Metro in 2018.

The GOP voting bill, Senate Bill 225, proposes tighter rules on presenting ID when people vote in person, early and absentee voting and postelection audits. It would require unique identifiers on absentee and mail ballots, to be matched with personal identification numbers given to voters, and increase the time period for voters to request an absentee ballot before an election to 21 days instead of the current 14.

The period for delivering absentee and mail-in ballots before an election, now 15 days, would change to four days. Only individual voters or a family member could turn in their absentee or mail-in ballot, and anyone else returning a ballot could face a felony charge.

Finally, it would repeal the provision enacted last year for all-mail voting during periods of emergency, such as that caused by the coronavirus pandemic. The bill was referred to the Senate Legislative Operations and Elections Committee.

The bill would allow Nevadans with disabilities to register to vote, apply for and cast an absentee ballot using the same electronic system used by military and overseas voters, also known as the Effective Absentee System for Elections.

Voting and disability rights advocates spoke in favor of the bill, saying that it would help to alleviate the difficulties that those with disabilities face when trying to vote using traditional means.

Also introduced Thursday, Senate Bill 212, sponsored by Sen. Dallas Harris, D-Las Vegas, would change the rules on police use of deadly force. It would require officers to use de-escalation techniques before resorting to greater force. It would require agencies to adopt written policies on how police should respond in cases that involve someone who is unarmed, frail or elderly, a child, or physically or mentally disabled and require agencies to report on confrontations annually to the state.

It would also bar the use of restraint chairs and prohibit police from firing rubber bullets or tear gas indiscriminately into a crowd or directly at someone, or without issuing a prior order for demonstrators to disperse. It was referred to the Senate Judiciary Committee.

The Assembly Education Committee heard Assembly Bill 109, a committee bill that would require all teachers in charter schools to be fully licensed; current law allows for 70 percent of charter teachers to be licensed.

According to the State Public Charter Schools Authority, out of approximately 2,300 teachers now in charter schools, only 39 don’t have licenses and only in niche areas outside the core curriculum, such as dance, yoga and band.

The discrepancy prompted several members to ask what problem the bill sought to address. Assemblywoman Michelle Gorelow, D-Las Vegas, said its intent was to ensure conformity across the board for teacher licensure and “make sure that all of our teachers are qualified, not only in the subject matter and also in classroom management.”