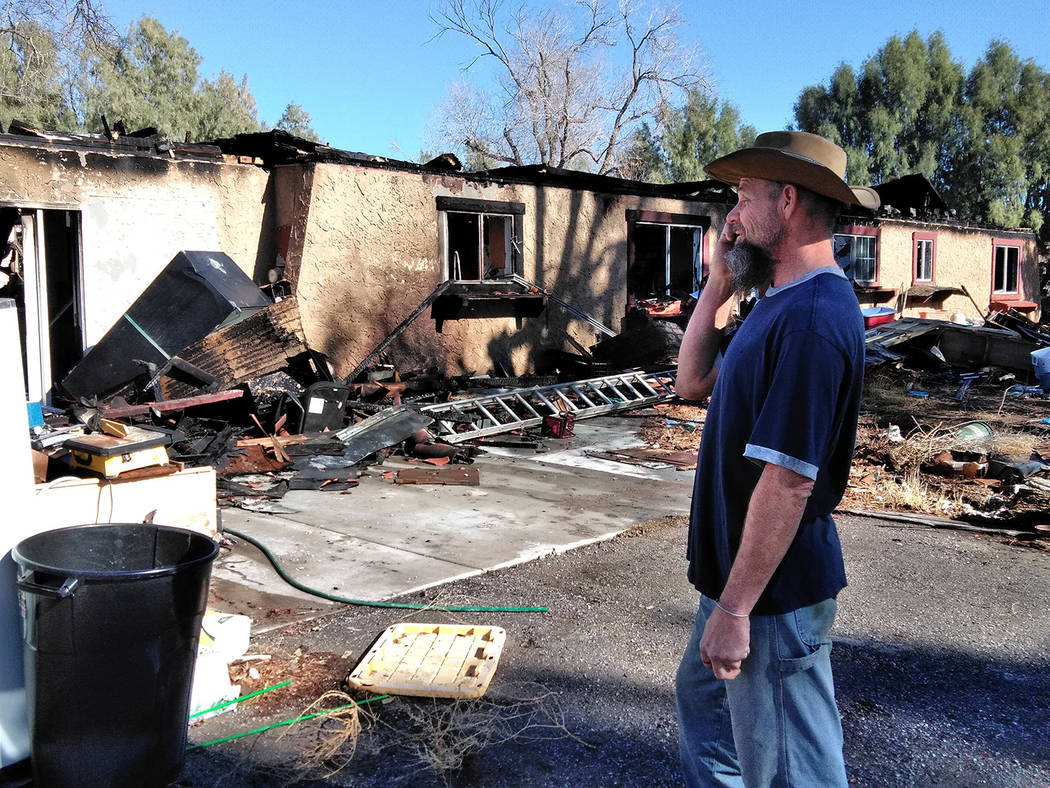 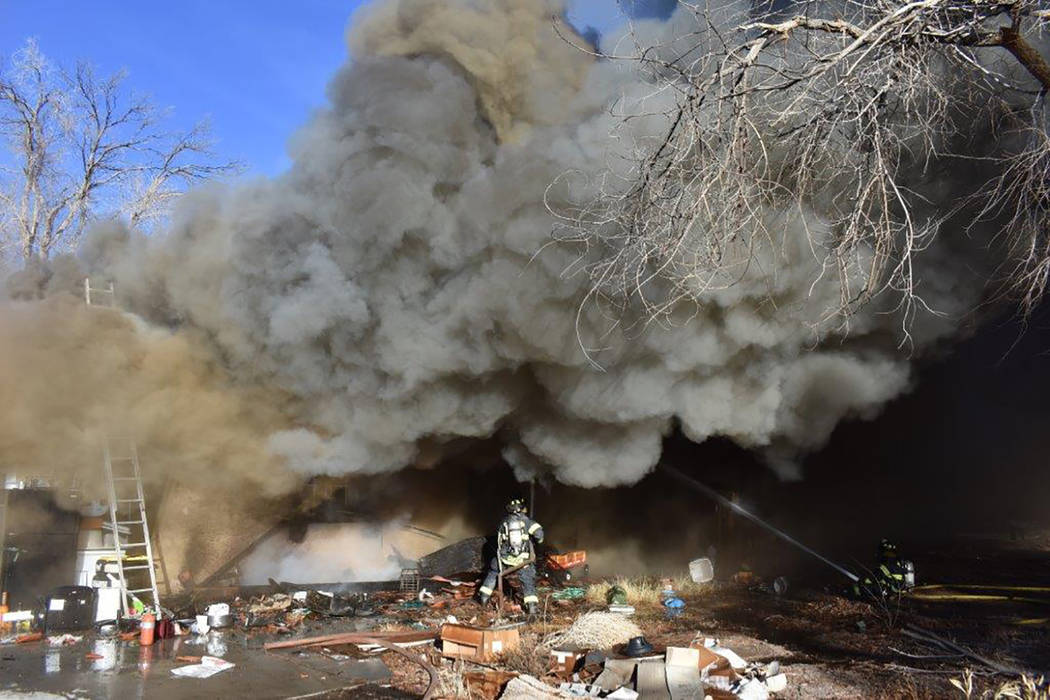 Special to the Pahrump Valley Times The sheer size of the fire dwarfs firefighters attempting to extinguish the structure fire on Monday afternoon Jan. 10. No serious injuries were reported but the fire laid waste to the home along the 2200 block of Manse Road.

“It started in the roof area, right over the kitchen,” said Pahrump resident Royal Cutler, who less than 24 hours prior, witnessed his family’s home burn to the ground in a fire which broke out just before 3 p.m. Jan 10.

The next morning, Cutler was scavenging the property along the 2200 block of Manse Road, looking for anything that was not charred by the intense flames to reclaim for himself and three other family members.

Cutler, who lived in a casita on rear of the property, mourned the loss of two pets in the fire, but he was thankful none of his family suffered serious injuries.

Interestingly, his casita was spared from the flames.

Cutler’s mood that morning was slightly brightened when he found a few belongings that were not consumed by the fire.

“We lost a lot of our belongings, but not everything,” he said. “My dad recovered his gun and his wallet. My mother also recovered her wallet, so in those terms, we are really fortunate. Personally, I think we are holding up pretty well, but we lost a couple of our pets. We lost our bird named Boo, and our pet possum, Smidgen. Boo was a small pocket parrot.”

Cutler said he was preparing to run a few errands that morning when he glanced up at the roofline of the home.

Ironically, Cutler said the likely cause of the fire was what was used to extinguish it.

He noted that the recent rains this month forced water through a hole in the roof of the home.

“I believe that the moisture somehow got into the ceiling where the electrical components are and created a short circuit which started the fire,” he surmised. “I tried to use two of my three fire extinguishers before I called 911, but I soon realized that it was more than I could handle.”

Upon their arrival, Pahrump fire crews realized they were in for a tough fight as they witnessed pressurized smoke and flames erupting from the expansive, Mansard-style roof of the residence.

Hidden within were life-threatening hazards, including firearms, ammunition and several fully-charged oxygen tanks among what was described as an overabundance of belongings, both inside and outside the home.

Once on scene, trying to extinguish the fire presented its own set of obstacles for fire crews, according to Pahrump Fire Chief Scott Lewis.

An apparent overabundance of materials and belongings surrounding the outside of the structure made it difficult for firefighters to get close to the structure.

Crews were also forced to maintain what’s known as a “collapse zone” while extinguishing the blaze.

“The biggest challenge we had was being forced to use a mobile conveyance for water,” he said. “We were continuously shuttling our water tenders from a hydrant on Homestead Road, but we had a steady flow of water, so we never really lost water supplies. There were times that it was pretty close, but we just kept rotating the water tenders. that’s why there are inherent problems when you live in a rural environment because you have to bring water with you.”

Once the water supply was established, Lewis said crews laid down a veritable deluge of water upon the flames.

“We were dispensing water at close to a minimum of 1,000 to 1,500 gallons a minute, so every three minutes we would expire the tank of the water tenders,” Lewis noted. “If you figure that a water tender holds 3,500 gallons of water, it makes you think about how many trips they actually made. This was a single-family dwelling, but the character of the fire acted like it was a warehouse full of materials. There were also explosions of oxygen tanks occurring along with loaded weapons inside the residence.”

Additionally, firefighter Capt. Steve Moody suffered an injury when a large piece of the roof fell on him during the early stages of fighting the fire.

Cutler said he and his three family members are doing as well as can be expected under the circumstances, at present.

“My family is doing good and I got them into a home right now,” he said. “I thank God that they are okay and they are warm. Right now, my father is wondering exactly who his insurance agent actually is. He is trying to find that out right now.”

Regarding what, if any kind of assistance the family of four could use, Cutler remained uncertain as he continued scavenging for any property worth retrieving this past Thursday morning.

“As far as what kind of help we could use right now, I would know a little better probably later,” he said. “All my mother mentioned was a couple of jackets. My neighbor is a member of Pahrump’s Mormon church and she said she was going to try to get something going for us. I imagine if you contacted the Mormon church in town, word will get to her. We have lived here since October of 2010. So we’ve been here quite a while.”