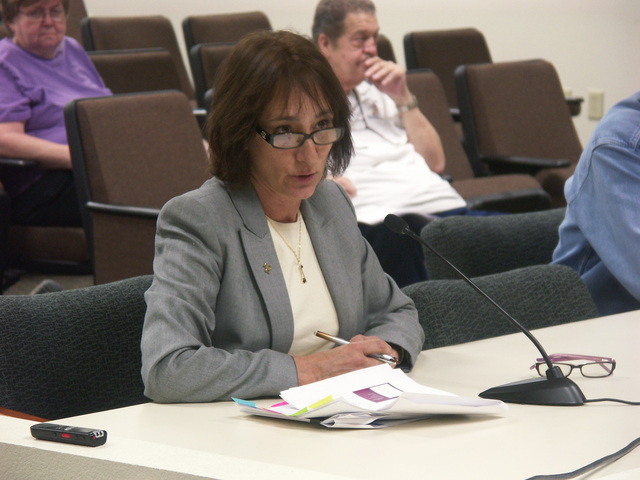 Additionally, the meeting provided attendees with a forum for those who believe are responsible for continually stonewalling the project.

Town Board members, staff and local residents place the blame squarely on officials with the Bureau of Land Management (BLM).

Environmental Compliance Specialist MaryEllen Giampaoli said more than nine years ago, the town board submitted a Recreation and Public Purpose application to the federal agency which encompassed approximately five to 10 acres of hardened infrastructure and anywhere from 1,500 to 2,000 trails for outdoor enthusiasts.

At present, the previous board’s action appears to be futile.

Though the term was not mentioned, the word “favoritism” sprang to the minds of many as the compliance specialist spoke about the application submission.

“There was ample room for everyone, but unfortunately the BLM did not embrace this application.” Giampaoli said. “Although similar types of proposals are being considered in Clark County, the BLM would not consider this park in Pahrump. They recommended that rather than trying to acquire it through Recreation and Public Purpose, the town should consider taking Rights of Way out for riding trails,” she said.

Town Board member Bob Adams expressed his frustration on how long the process has taken.

Adams’ involvement in Last Chance Park goes back more than seven years as a member of the Public Lands Advisory Board (PLAB).

“We had everybody on board who knew what to do, yet it didn’t come together. It felt it was like Gilligan’s Island where it’s supposed to be a three-hour tour, but we’re still stuck on the island. We’ve got $35,000 into it and the BLM has about $12,000 into it,” he said.

Adams’ other disappointment was the fact that an Environmental Assessment (EA) was not made on the site, which is a requirement per the BLM.

“We have about $47,000 in this and yet an EA has never been prepared, which is one of the first things you do on a project like this is. How does this happen? The primary documents that you build everything else on top of never occurred. That’s the very foundation that you have to complete before you can move forward on it,” Adams said.

As a response, Giampaoli told Adams there was an apparent miscommunication on the part of the BLM and town officials at the time.

Other issues including the mitigation of historical artifacts created additional delays.

“The BLM offered to conduct all of the work that needed to be done to mitigate the cultural resources issues at the site with the caveat that it would be done on the BLM’s schedule and budget and not on the town’s. The BLM also offered to complete the EA as well. As far as I know, they are getting close to completing the cultural mitigation. At this point, they are ready to have an EA, but now they are expecting the town to prepare the EA,” he said.

Miscommunication aside, costs associated with conducting an EA pose additional problems for the town.

“Preparing a basic EA document would be somewhere between $8,000 and $10,000.” Giampaoli said. “That doesn’t include Desert Tortoise surveys and mitigation fees you may have to pay. The cultural resource issues have been pretty well mitigated. The preliminary cultural resource costs started at $15,000,” she said.

“They will likely remove large blocks of previously established disposal area along the Last Chance Mountain Range. The town may identify other lands that may be better suited to establishing equestrian trail heads,” she said.

As such, discussions among the board, staff and public turned to possibly selecting another locale on town owned land.

“I don’t trust the BLM, I really don’t. They keep changing the rules. At the pleasure of the board I would like to ask staff to look at the town land that we own outright and see if there isn’t a piece of land that we can use and or dedicate to get this project moving,” he said.

“We can talk about a parking lot, but the original cost, the $42,500 per phase, didn’t even include engineering costs. You saw the engineering cost for Simkins Park. There have been some fees and costs that were not projected,” she said.

Holecheck also spoke to the idea of seeking the help and advice of elected officials in the nation’s capital as a last-ditch effort for Last Chance Park.

“What I have begun to do is to work with our congressional delegation. A senator was involved early on in this project and it was near and dear to him. Maybe it’s time to get them back involved,” Holecheck said.