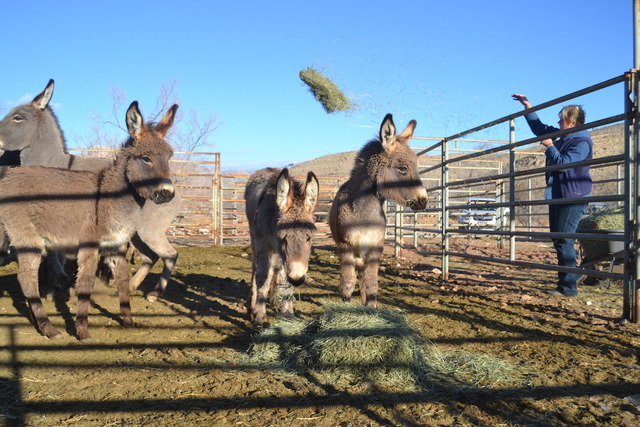 The Bureau of Land Management has readied 12 wild burros caught in the Pahrump Valley for adoption, tentatively scheduled for Jan. 26. The captured burros, or wild donkeys, range in age from a few months to approximately 12 years.

The burros were baited and self-penned on private property in Nye County following a collection announcement by BLM officials due to traffic safety concerns along Route 160 and other side-roads throughout the valley.

According to a BLM press release earlier this month, Pahrump residents contacted the agency with traffic safety concerns which prompted the collection and adoption measures. Officials say that the animals have become both a public safety concern causing property damage and they have also become a nuisance.

BLM officials assert that some of the nuisance behavior has been caused by tourists and locals who feed the animals. This, in turn, has caused the burros to lose some of their wild characteristics. BLM Wild Horse and Burro Specialist Krystal Johnson also attributes over-population in herd management areas to nuisance behavior. Where food sources have become limited due to over-grazing of large numbers of burros, they begin to migrate to areas that have forage available; which in many cases means close to or within residential areas. BLM strives to reduce herd numbers from the current 166 to 248 wild burros to 54 to 108 in the Johnnie Herd Management area north of Pahrump. Johnson estimates that there are approximately 200 burros in the herd management area right now.

The burros are not indigenous to the country, according to BLM interpretive hiking guide volunteer Tom Lisby. Whether they were abandoned by the military, miners or early settlers, the burros have rapidly reproduced and over-browsed vegetation, which has spurred other ecological upsets such as erosion, spring contamination and competition with other animals and birds for food. The burros, however, do have historical significance to the area, according to Lisby, and as such, the BLM has endeavoured to reduce their numbers and damage that they cause, while preserving their habitat.

The roundup and relocation is one way BLM hopes to achieve that goal. An ambassador for the desert’s wild burros is Jackson, a four-year old male, who was adopted by the Red Rock Canyon Interpretive Association to help educate people about land conservation.

Jackson lives just south of Red Rock Canyon near the horseback riding area off Route 159. The public is welcome to visit him to further understand how burros function in a domesticated habitat. Access to Jackson also previews the species for would-be adopters of his recently captured cousins.

Burros, or donkeys, according to Lisby, have erroneously gotten a reputation for being stubborn. Lisby said burros are far smarter than horses and can not be intimidated. Instead, he said, they can be “taught” by the use of food or trust.

They also differ from horses in that they will stand their ground and fight when threatened, rather than flee.

Johnson cautions people about approaching wild burros. A safe distance to keep between oneself and a burro is minimally 200 feet. Burros, or any wild animal, can be unpredictable when it perceives a threat, she said.

Prior to the being released for adoption, Johnson said, each of the burros will be vaccinated, de-wormed and ages determined by a veterinarian. Each of the males, she said, will have recovered from gelding surgery by adoption day.

Reasons for gelding the males are two-fold, Johnson explained. The first reason is in line with BLM’s efforts at over-population. The sterilization procedure, she said, also reduces the amount of testosterone in the animal, which is known to contribute to aggressive behavior.

Burros are useful animals, Johnson said. They can be used as pack animals and larger burros can be ridden and taught to drive. Many people, Johnson said, also use the burros as guard animals. They will sound a vocal alarm alerting the presence of an intruder.

“They can also help keep coyotes at bay,” she said.

“I suggest that they do one last roundup. Take them all off the range and send them all off to Yosemite, Yellowstone or another national park where people go to look at wildlife. You’ll have have natural predation too. The weaker ones will become part of the food chain,” he said.

He scoffed at those who want to keep “feral” burros and horses in the area to promote tourism. “Show me how many people actually come here and stay here so they can drive out and see them along the road. I see them as a danger,” he said. The wild horses, Schinhofen said, foul cultivated springs and over-graze at the expense of cattle, presenting ranchers with added, costly management issues.

Schinhofen said that the commission passed a resolution stating that BLM needs to follow the law and control the numbers of wild burros and horses. He claims that what BLM did instead was, “Take away the ranchers instead of controlling the numbers of horses or burros.” Though he is happy with population control measures, he is not so happy with the expense of the program. “It costs us about $160,000 a year to house a horse. Do we really want to spend that kind of money?” he asked.

Schinhofen laments about the numbers of coyotes in communities as well. “As with the burros, it becomes a safety issue. Though coyotes were here first, they have no natural predators other than mountain lions. If the coyotes are all down here, where are the mountain lions going to come?” he asked.

BLM has announced that it expects to begin a wild horse gather beginning January 26. A press release dated Dec. 19 states that 225-250 mares will be treated with a fertility control vaccine and released back to the range. Approximately 460 excess wild horses will be removed to reduce the impacts to the public lands. Division Chief of the National Wild Horse and Burro Program Joan Guilfoyle said in the press release that the welfare of the wild equines is a top priority for BLM and the organization is committed to providing humane care and treatment of the animal.

Johnson said there are two more bands of wild burros that are encroaching on Pahrump communities. BLM continues to work on the gather of those animals, who continue to cause safety and property damage issues to motorists and residents.