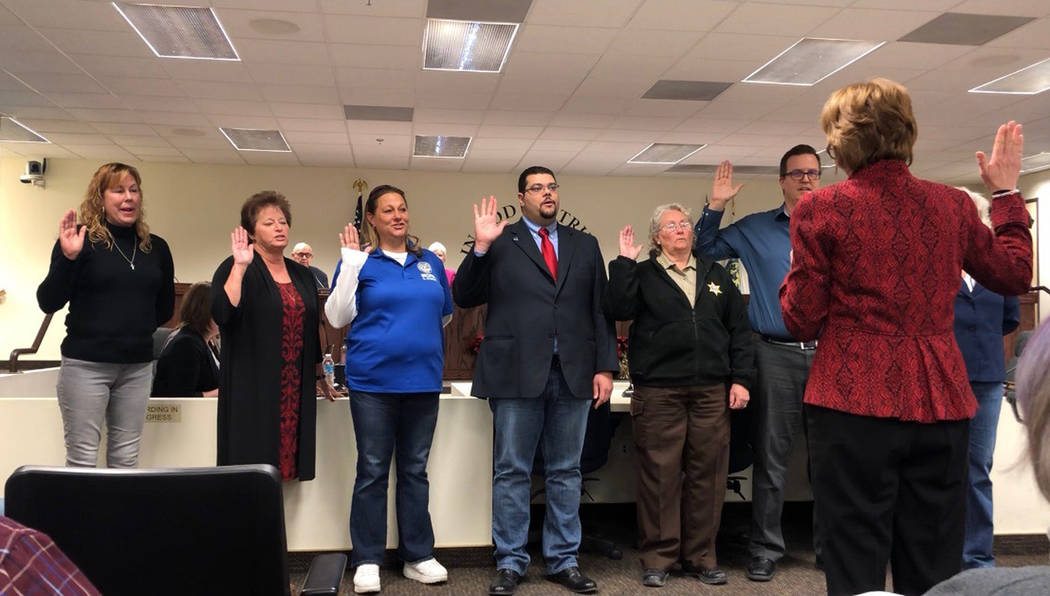 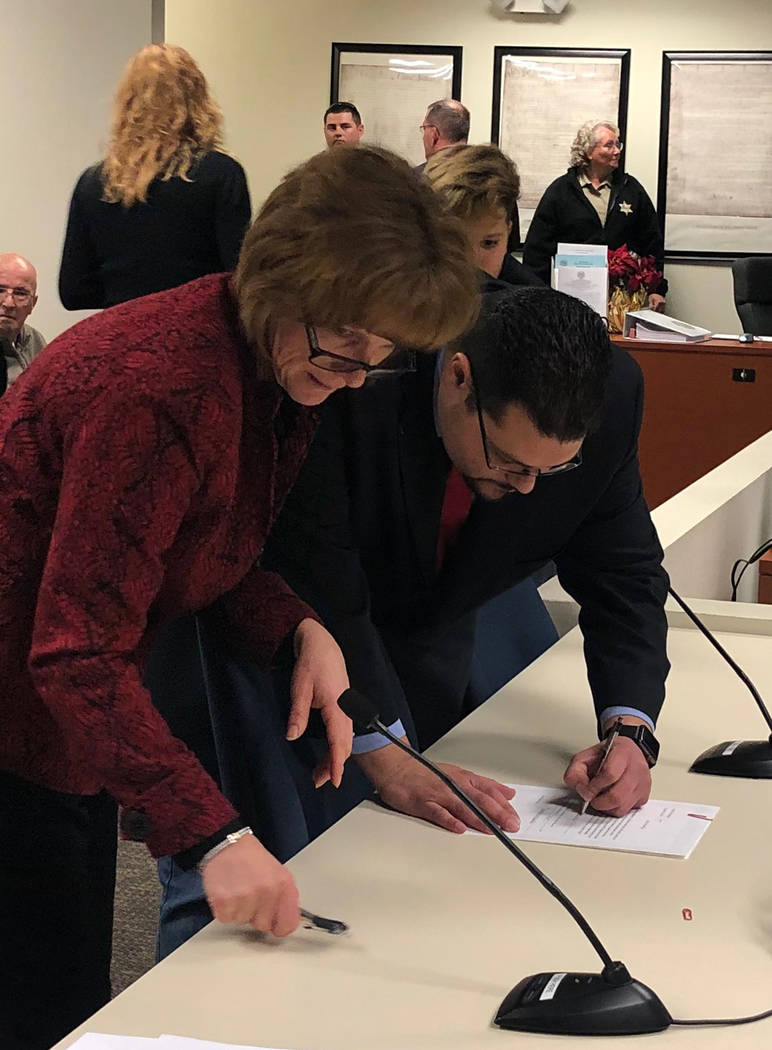 Special to the Pahrump Valley Times Leo Blundo is pictured signing a declaration form after taking his oath of office as the new representative for Nye County Commission District 4.

The time for turnover at the Nye County Commission level is rapidly nearing and commissioner-elect Leo Blundo is preparing to take his new seat as representative of Nye County’s fourth district.

“I feel fantastic, I feel great, very excited,” Blundo said with enthusiasm, expressing his readiness to take on the next chapter in his life. “I have a plan for my first 100 days. I want to tackle some of the code issues that have been plaguing the county and businesses, I want to address some of those and clean that up.”

Honing in specifically on the business licensing process, Blundo said he wants to keep a close watch on how the recent changes to the manner in which these are administered affects the overall operation.

The county voted earlier this year to remove the administration of privilege business licenses, those regulating enterprises such as liquor, gaming and marijuana, from the control of the Nye County Sheriff’s Office to instead have these licenses administered by the county itself.

“The licensing process, the codes that are being adopted right now, I just want to make sure we get that right because it directly effects a lot of businesses in the community,” Blundo stated.

“Being in business, codes generally don’t change that much, so the codes that we do operate under, I want to make sure they flow and everything is operating the way that it should because those are some big changes that were recently made. It’s been explained to me that it is going to be very streamlined, business-friendly and I just want to have my eye on it. I know it will effect a lot of businesses here and those businesses are a part of the tax base we have here in Nye County. It’s extremely important.”

True to his campaign platform, Blundo also highlighted his desire to see the roads in Nye County improved.

“I want to get a couple more roads done. I know commissioner Cox has mentioned Pahrump Valley Boulevard from Gamebird down to Manse and Thousandaire, that is on our list and out in Amargosa, Farm Road, I know we have issues with that road and we are working on a plan to get that addressed. We won’t see our new budget cycle come out until June next year but in my first 100 days, if we can make sure that we have those items identified and we give direction to public works, I think we will be on the right track,” Blundo explained.

“And the public works director, Tim Dahl, has been fantastic. He is very level-headed and he really cares. He recently got us a grant for $100,000 and I was like, holy guacamole! When you’re working with a roughly $2 million budget, $100,000 is five percent. Tim is very much in line with my line of thinking, that any outside money we can get in to augment our budget is great because it’s not money coming out of the taxpayers’ pocket.”

With the contentious topic of the Pahrump animal shelter grabbing public attention, animals were yet another subject Blundo said he is concerned about. While the shelter itself is undoubtedly an important component, it was not the only thing Blundo was focused on.

“The other big component is individual responsibility,” he stated. “People who abandon their animals, retire their animals because they have a new puppy, the puppy mills, animal hoarding, we may not like talking about that but it is a reality… It’s a very emotional issue but we have to be able to be objective, look at the issue and identify, where are the problems starting? We need to look at potential funding if that’s the direction we go and we need to look to outside community partners to be able to build a new shelter. But that’s just one side of the equation. The community itself, personal responsibility, is the first part of the solution.”

There were many other topics that Blundo said he is interested in pursuing and pushing forward while in office but the one thing that remained top priority for him was communication with the public.

Knowing the concerns and needs of the people of Nye County is key, he said, concluding, “I encourage anybody and everybody to call me, I have a very open-door policy. Just contact me and we can sit down, have a cup of coffee and discuss whatever your concerns might be. I want to be available to the people.”