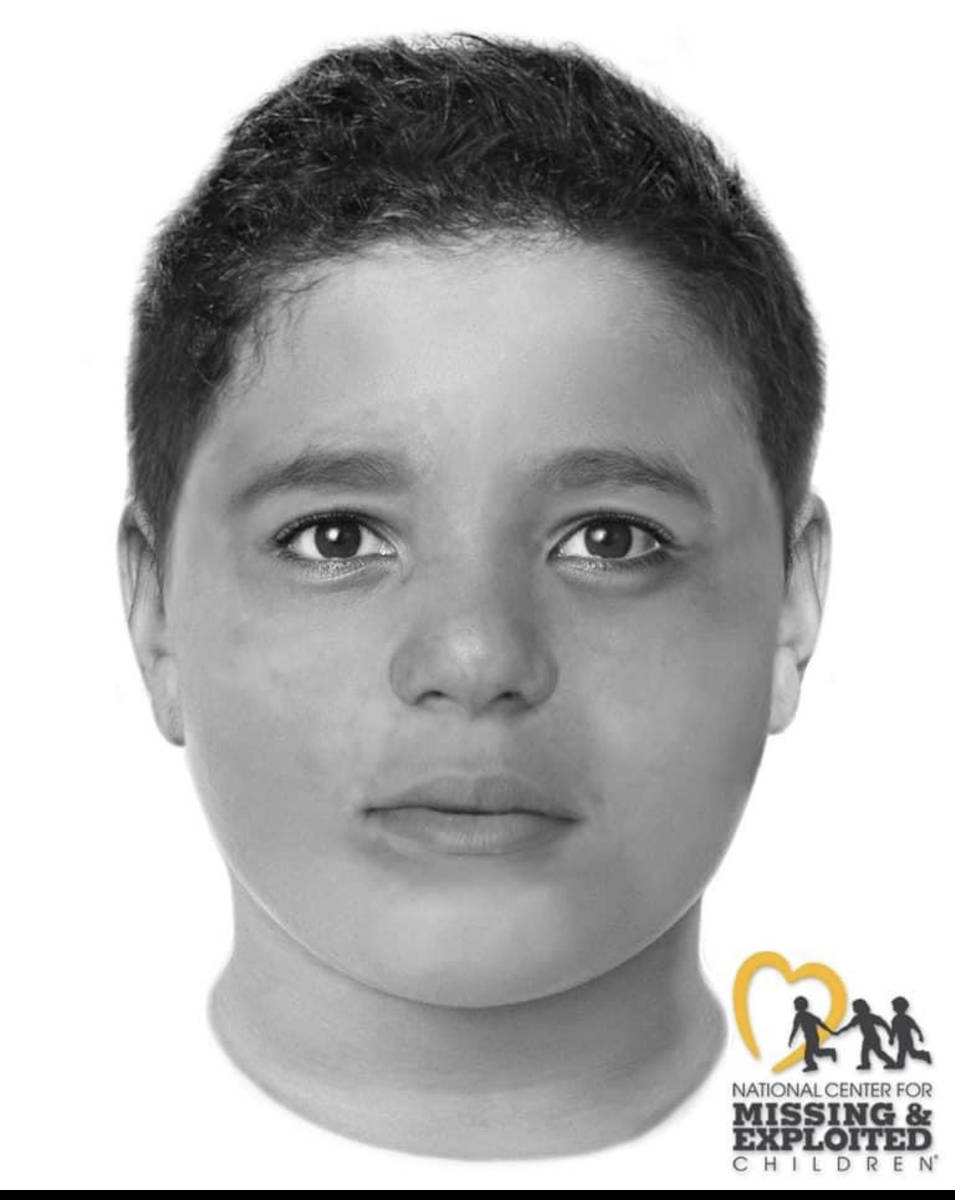 Special to the Pahrump Va The National Center for Missing and Exploited Children has provided a digitally enhanced photo of the young homicide victim. LVMPD is asking teachers in particular to pay close attention to this photo. The victim is between 8 and 12 years old,  4’11” and 123 pounds. Anyone with information is urged to call the tip line 702-828-3521 or 702-828-2907.

For a few hours on Saturday, detectives thought they were racing against the clock to locate an 11-year-old boy whose half-brother was found dead Friday morning in Mountain Springs.

But by Saturday afternoon, Las Vegas police announced that both brothers were found safe and alive with their father, camping in central Utah with no cell phone service. Now, police are once again trying to identify the body of the young boy found off of state Route 160 between Las Vegas and Pahrump.

At 9 a.m. Saturday, Metropolitan Police Department homicide Lt. Ray Spencer held a press conference to announce that a woman had identified the body as her 8-year-old son, and police were looking for the boy’s half-brother, 11-year-old Eden Montes, and the children’s biological father, 37-year-old Jose Montes-Herrera.

The 8-year-old’s frantic mother had called police at about midnight Saturday because she thought she recognized her child from a police sketch circulating of the boy who was found dead in Mountain Springs, Spencer said. The woman said she had last seen her son Thursday night with Montes-Herrera.

Spencer spoke with the mother for more than an hour, and investigators with the Clark County coroner’s office met with her as well. She viewed autopsy pictures, and was so sure that her son was the boy found dead that she signed an affidavit with the coroner’s office, Spencer said.

Another family member also misidentified the 8-year-old as the boy found in Mountain Springs.

Detectives then spoke with Eden’s mother, who had also seen the news coverage and thought the sketch resembled her son’s brother. Montes-Herrera had picked both boys up on Thursday night, and Eden’s mother had not been able to get in touch with them.

It was not unusual for Montes-Herrera to pick up both boys for the weekend, Spencer told reporters Saturday morning.

Spencer said during the Saturday morning press conference that a multi-state Amber Alert was going to be issued for Eden and his father. The press conference was held within hours of speaking with the 8-year-old’s mother because information had already been posted to Facebook, and detectives had “serious concerns for the welfare of the missing 11-year-old,” Spencer said Saturday afternoon.

The Amber Alert was postponed because shortly after the morning press conference, investigators received tips that the boy had been spotted in Utah.

Montes-Herrera, who was last seen with the children towing an RV behind his pickup truck, spoke with relatives over the phone was able to get to a location in Utah with cell service. By 2 p.m. Saturday, detectives confirmed over Facetime that the 8-year-old was still alive, Spencer said.

At about noon Saturday, a smiling woman leaving her home who identified herself as Eden’s mother told a Review-Journal photographer that the boy had been found safe.

Spencer stressed that although detectives believed for a few hours on Saturday that they had identified the boy whose body was found in Mountain Springs, police did not stop investigating other tips. He said police have been working around the clock since the boy’s body was found Friday morning.

“As an investigator you continue to take all leads as they come in, and you don’t rule out anything,” Spencer said. “As these tips are still coming in we are still planning for contingencies as far as if in fact this is not a person that we’re looking for, we’re going to have another plan and a different path. And that is exactly what we have been doing all throughout the afternoon, and all throughout the night.”

A group of hikers found the boy’s body at about 7:45 a.m. Friday morning in a forest area near the Mountain Springs Trailhead, off of state Route 160 near mile marker 20. Police said in a statement released Friday evening that the boy’s body may have been left in the area within 12 hours of him being found.

By Friday afternoon, Mountain Springs resident Anna Jones carefully placed flowers and a small cross reading “RIP Sweet Child” in the gravel turnoff near where the boy’s body was found.

“How can you do that?” she said about the boy’s death. “I just can’t even think of how that could happen.”

Police knocked on doors throughout the small community on Friday morning, searching for any information to help the investigation.

“He is clearly the victim of a homicide,” Spencer said Friday, although he did not say if detectives have determined exactly how the boy died.