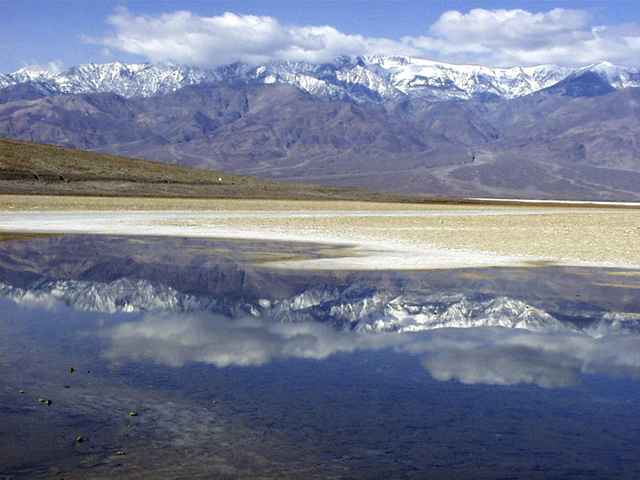 DEATH VALLEY NP — A Colorado company with historical ties to the Death Valley region is donating $50,000 to help produce documentary features on the national park.

Rio Tinto Minerals has donated the funding to produce a documentary video series on the unique beauty and history of Death Valley National Park as part of the National Park Service Centennial anniversary in 2016, the park announced.

Early incarnations of the borax company used the historic 20-mule teams to haul borax out of Death Valley in the late 1800s.

The gift was made through the non-profit Death Valley Natural History Association to support the Death Valley National Park video project, a multi-agency collaboration with the National Park Service and Bristlecone Media, whose documentary credits include The Mono Lake Story, Eastern Sierra Land Trust, and Grand Canyon in Depth.

The “Death Valley Explorer” video series is designed to engage the public in the park’s rich environmental and cultural history. Each episode will feature visually stunning imagery and inspiring natural and human stories that highlight the unique attributes of America’s lowest, hottest and driest national park.

“Rio Tinto Minerals is extremely proud of our heritage that dates back to the 1880s, when our 20-mule team wagons first hauled borax out of Death Valley, and still today, remain one of the most memorable icons of the American West,” Dean Gehring, president and chief executive officer of Rio Tinto Minerals, said in a statement. “Our hope is that this video series inspires a new generation of Americans to appreciate Death Valley’s one-of-a-kind geology and history that has been so important to our employees and the local community.”

A recreation of the 20-mule team wagon will participate in the Wild West Extravaganza parade Saturday starting at 9:30 a.m. on Highway 160 between Highway 372 and Basin Road.The 20-mule team will extend more than 170 feet.

“We hope this series will strengthen the connection between the American people and Death Valley National Park, and build a sense of ownership and pride, inspiring a commitment to its stewardship,” stated acting Superintendent Mallory Smith.

Rio Tinto Minerals’ commitment to environmental preservation dates back to the early days of Borax. In 1916, previous company officials helped write the language that was adopted by Congress to establish the National Park Service.

Later the company, which operated for decades as U.S. Borax, donated land holdings to the federal government and lobbied to have the area protected as a National Monument in 1933, and again as a National Park in 1994. In 2010, Rio Tinto Minerals donated an additional 110 acres and associated mineral rights to Death Valley National Park.

Death Valley is the largest U.S. National Park outside Alaska at 3.4 million acres. About 91 percent of the park is protected as officially designated wilderness.

Since 1954 the Death Valley Natural History Association has been the official nonprofit partner of Death Valley National Park, having donated over $3.5 million to the National Park supporting education, preservation, and scientific research. For more information or to make a donation, please go to http://www.dvnha.org or call 800-478-8564.