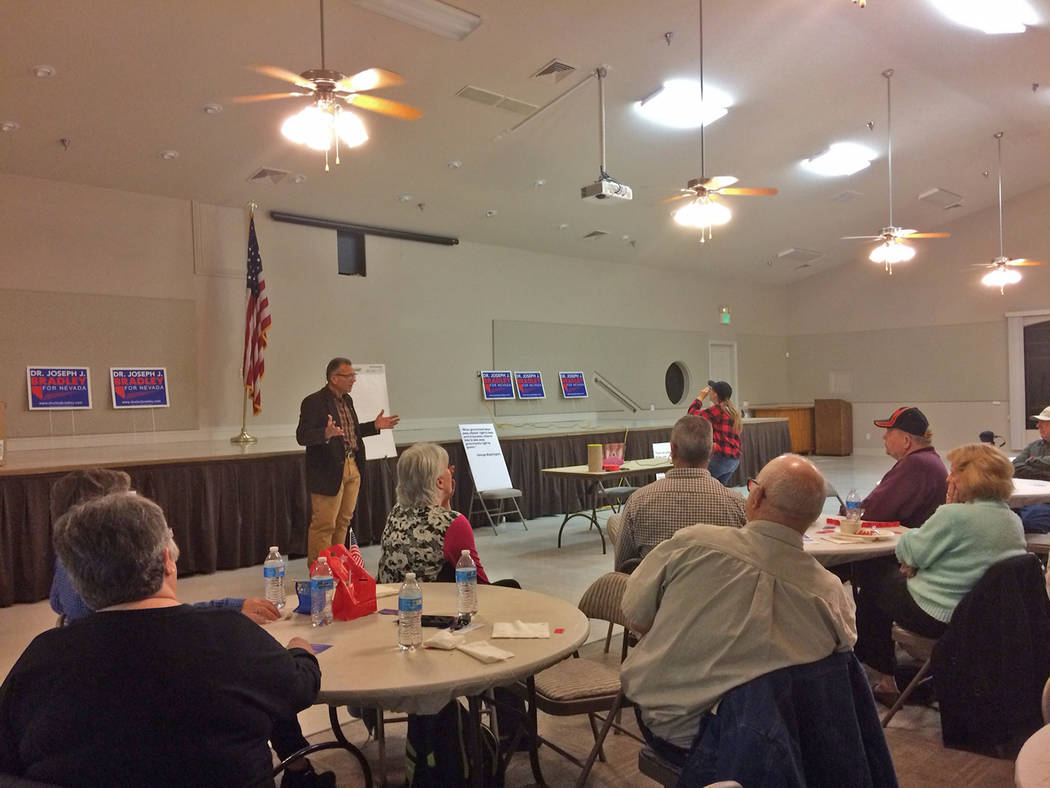 Robin Hebrock/Pahrump Valley Times Dr. Joseph Bradley is seeking the Republican nomination for the Nevada Assembly District 36 seat and is pictured speaking before a group of community members during an even he held in late October. 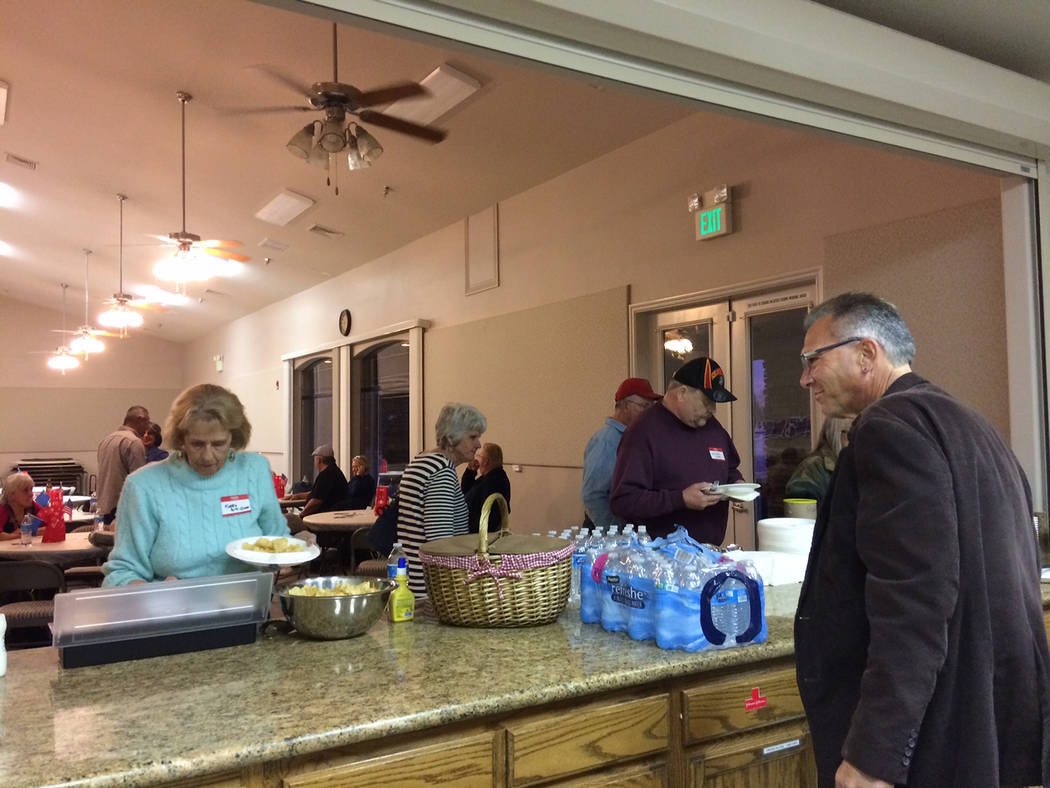 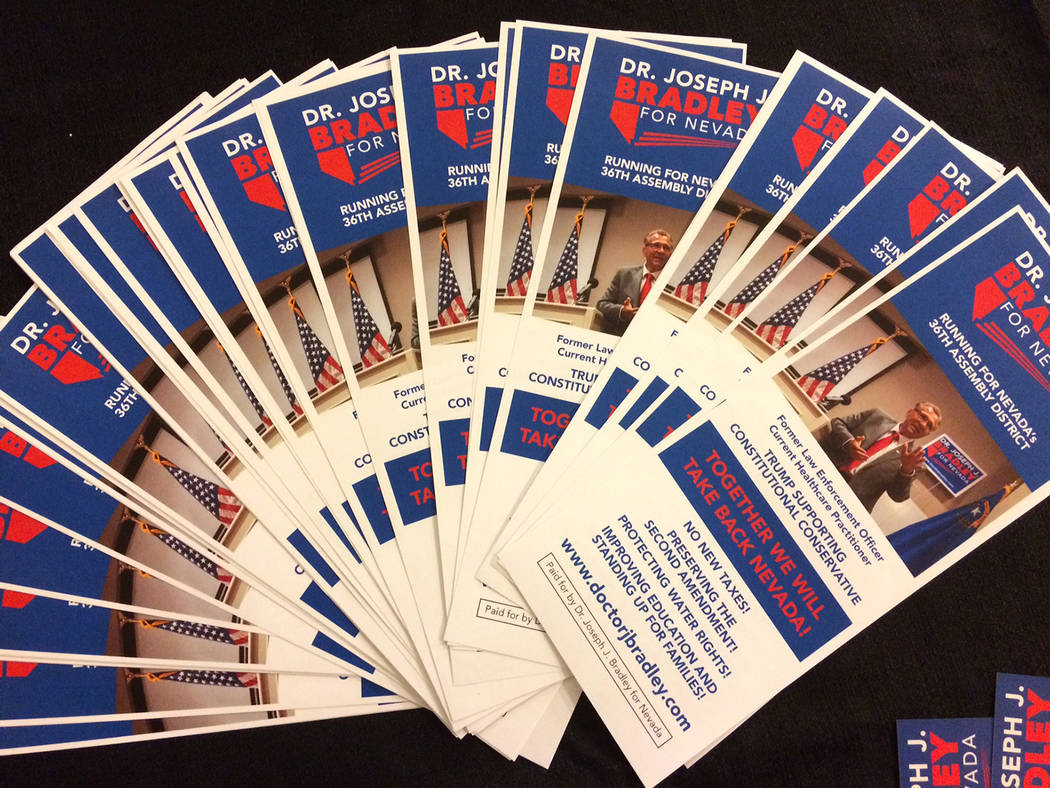 Robin Hebrock/Pahrump Valley Times Pamphlets detailing information on Dr. Joseph Bradley were in prominent display at the sign in table for his most recent campaign event.

The calendars have yet to even turn to the new year and already the 2020 election season is well underway, with candidates for many of the offices that will be up for election jumping right into engaging with the communities they wish to represent.

In Pahrump, Nevada Assembly District 36 candidate Dr. Joseph Bradley is mounting a challenge against appointed Assemblyman Greg Hafen II for the 2020 Republican nomination. Bradley officially kicked off his campaign in September and held another community gathering on Oct. 29 at the Artesia Community Clubhouse to spread his campaign message, goals and stances.

Bradley opened his event that evening with a round of applause for President Donald Trump and the U.S. military for the execution of ISIS leader Abu Bakr al-Baghdadi, which the audience enthusiastically joined in. He then turned attention to a patriotic video titled “The Star-Spangled Banner as You’ve Never Heard It” as a means of underscoring the importance of the American flag and all it stands for before delving into his speech.

Moving on to issues of particular importance to many area voters, Bradley began with his position on taxes.

“Taxes. Very simple on taxes. No!” Bradley declared, remarking that he has signed the Taxpayer Protection Pledge as he believes that taxes are the result of poor governmental leadership. “Let me make it clear,” he emphasized. “Will not ever do it! Will not vote for a tax increase or, to be certain, a tax extension.”

On the topic of education, Bradley gave an overview of his belief that vocational training should be offered by colleges and universities, with college credits earned for students completing the course and becoming certified in their chosen vocation. In addition, he explained that he is against Common Core but is a strong supporter of parental choice rights when it comes to education. Bradley also said he feels a panel of principals should be created for each school district, so that every school has a direct voice in how educational dollars are allocated.

On the turbulent topic of water, Bradley asserted that he believes the local water crisis is a manufactured problem rather than a true one. “Right now it has the appearance that the personal, private well owners’ rights are looking to be taken away to once again be taken over by regulatory bodies, such as utilities and things of that nature. It’s just how it appears to me,” he stated.

Deborah Walsh, the campaign manager for Bradley’s opponent, Hafen, took offense to those statements and interjected to defend Hafen. She asserted that Pahrump Utility Company, for which Hafen is the general manager, does not seek new customers and was only established to serve the customers within the subdivisions developed by the Hafen family. Bradley rebutted that he was merely stating his personal opinion and exercising his First Amendment right to free speech before moving on.

The evening included some educational information on a topic Bradley is very familiar with as well, that of addiction. As a certified addictionologist, Bradley has spent many years helping those suffering from this devastating disease overcome their addiction and establish better, more productive lives for themselves.

The key component in battling any problem, including addiction, is to first understand it, Bradley emphasized. He remarked that he feels many of today’s politicians do not have a true understanding of addiction and therefore, they are unable to develop the necessary solutions to combat the issue. He himself has a deep, intimate knowledge of this problem and therefore, he feels he would be able to make a real difference to the state’s addiction struggles.

“Like any illness, we need early detection and once we detect it, we need to effectively treat it. Because as all we are doing to making people change and alter, and we are not really fixing anything,” Bradley said.

Removing shame and stigma associated with what is classified as a disease by many medical associations, so those struggling with addiction will not be afraid to seek help and can develop new, healthy coping mechanisms.