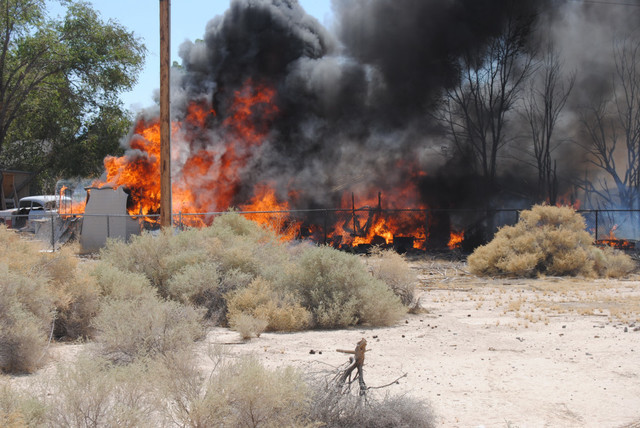 A brush fire set off a structure fire at a residence along Kimbery Street early Saturday afternoon. The fire destroyed several outbuildings as well as a classic 1968 Cadillac. It took firefighters close to two hours to extinguish the blaze. One person sustained a minor injury. Special to Pahrump Valley Times 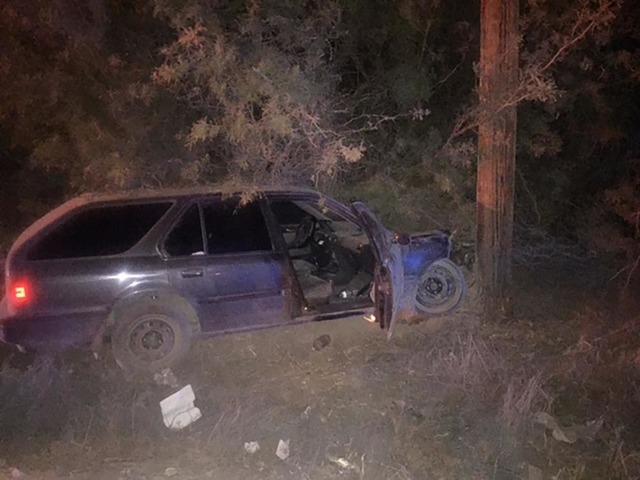 One person was transported to Desert View Hospital early Saturday morning after plowing into a power pole in the area of Homestead and Manse. Nye County Sheriff’s deputies are investigating the cause of the 2 a.m. crash. The driver is expected to recover. Special to Pahrump Valley Times

A destructive Saturday afternoon brush fire was one of a half-dozen weekend service calls for fire crews.

Pahrump Valley Fire Chief Scott Lewis said crewmembers were dispatched to an area north of town, as the assignment was elevated to a structure fire shortly after leaving the fire station just before 1:30 p.m.

“We were dispatched for a report of a brush fire with immediate structure exposures,” he said. “As we were exiting the fire station, we were notified that at least one exposed structure was well-involved on fire.”

Upon arrival, Lewis said crews arrived on scene and were met with additional structures on fire at the property along Kimberly Street.

“Upon arrival, we found several outbuilding-type structures at the rear of the property that were well-involved in the fire,” he said. “There were also mature trees in the immediate area that were also torching. The brush fire had extended beyond the property line.”

As a result, Lewis said crews broke off into two different assignments to combat the spreading fire.

The same group, Lewis said, also provided protection to the primary dwelling on that property, as well as the suppression of five additional outbuildings and a 1968 Cadillac which was involved in the fire.

He noted that the fire grounds contained many hazards for fire crews to contend with as they gained control of the blaze.

“There were 55-gallon drums containing various materials,” he said. “There were also several explosions during the course of the fire. One of the explosions actually rocked a building and lifted the roof about two feet, as well as blowing the sides out. It also sent a fireball to the north which tripled the size of that brush fire. There was a lot going on and it was a very dynamic scene.”

One person residing at the property sustained a minor injury to their upper extremity, while no firefighters were injured.

“It took approximately an hour and 15 minutes to bring the fire under control,” Lewis said. “The primary dwelling was protected without damage, but the outbuilding however sustained serious damage.”

The 55-gallon drums on the property were said to contain spray materials for roofing, as well as lacquer thinner.

The cause, Lewis said, appeared to be accidental.

“The occupant was using a saw and cutting some metal where the slag ignited the nearby very dry groundcover,” Lewis said.

Hours later, fire crews were dispatched to the intersection of Highway 372 and Charleston Park Avenue following reports of a multi-vehicle collision in the overnight hours.

“It was a three-vehicle accident with injuries, however, all parties declined transport to the local hospital,” Lewis said. “That was followed by another motor vehicle accident about an hour later at Manse and Homestead roads.”

Lewis said the second crash resulted in the shearing of a power pole just after 2:20 a.m.

“There was no entrapment but there was one injured person who was transported to the local hospital,” Lewis said.

The volume of service calls continued into Monday, where fire crews were dispatched to the area of 200 S. Highway 160 for a report of a Hazmat incident just before 9 a.m.

“It was reported initially to be an explosion of chemicals which resulted in an injury,” Lewis said. “Further investigation revealed that it was not an explosion, but a one-gallon container of a solvent that was thought to have had a safety seal on it. When the container was compressed it caused a quick splash upon the individual.”

The patient was evaluated and transported to Desert View Hospital.

Lewis said it was determined there was no real hazardous material spill.

“From a quantity standpoint, there was no actual Hazmat incident,” he said. “We ventilated where the incident occurred, which was actually at the front of the structure in the parking lot.”

Roughly a half-hour later, fire crews were dispatched to a residence on the south end of town after an individual was thrown from a horse.

“The incident occurred along the 1800 block of Santovito Street, where it was reported that the person fell from a horse,” Lewis said. “Upon arrival, we learned from witnesses that the person was bucked off of a horse and had a significant impact to the ground. The injuries and the mechanism warranted flight. We brought in Mercy Air 21 to the scene and that patient was flown to UMC Trauma in Las Vegas.”