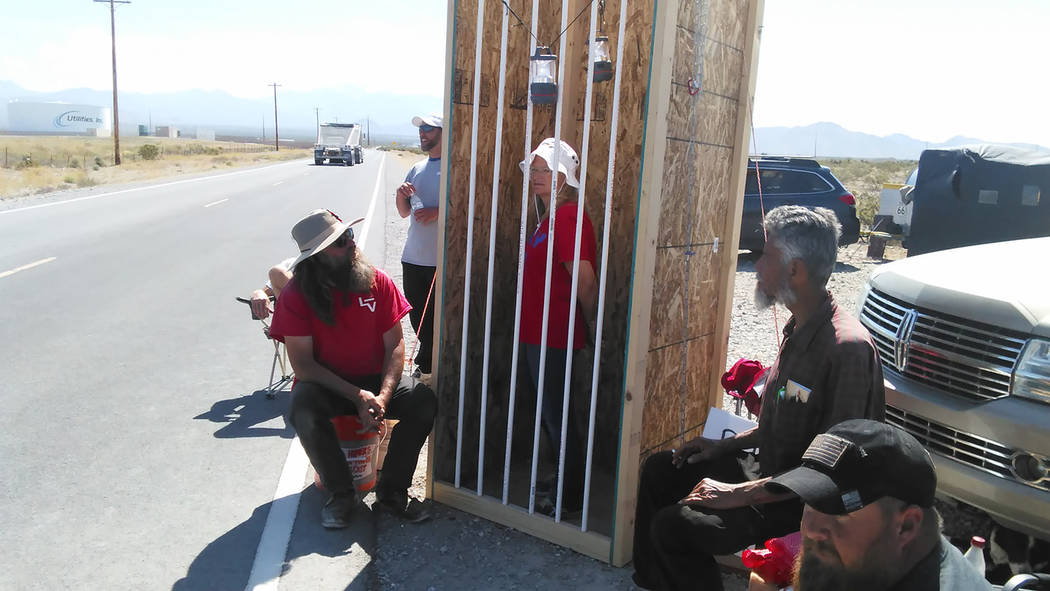 Selwyn Harris/Pahrump Valley Times Supporters of inmates Ryan and Ammon Bundy built a mock jail cell across the street from the Nevada Southern Detention Facility on Mesquite Road. Roughly two-dozen individuals are protesting what they claim are inhumane conditions and treatment to Bundy and other inmates. 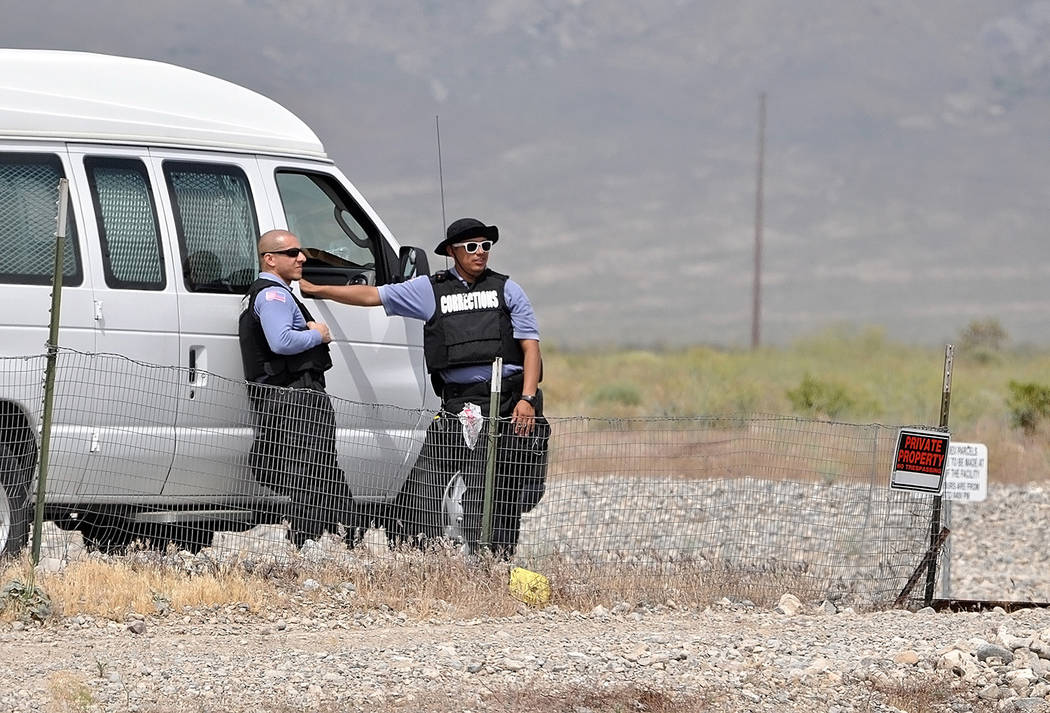 Horace Langford Jr./Pahrump Valley Times Two Nevada Southern Detention Facility officials stand watch as protesters have camped out across the street from the facility on May 5. Today marks the eighth day of the protest in support of inmates Ammon Ryan Bundy, awaiting a June 26, trial on charges stemming from a 2014 standoff with federal agents near their father’s ranch in Bunkerville.

Thursday was day seven for protesters camped out in front the Nevada Southern Detention Facility in support of inmate Ryan Bundy.

Bundy and additional defendants are scheduled for trial next month for their alleged, respective roles in the armed standoff against officials from the U.S. Bureau of Land Management back in 2014.

Protester John Lamb said he traveled to Pahrump from Montana in support of Bundy and other inmates.

Lamb was joined by others outside the facility who claim Bundy and other inmates are being mistreated by detention officials, a claim denied by the U.S. Marshals Service.

“We are protesting the abuse that’s going on at this prison that we have been hearing about from some whistleblowers inside the prison, who have been calling us,” he said. “They are mainly inmates and they have been abused for months and months. I came all the way from Bozeman, Montana and I wanted to find out what’s going on for myself out here.”

Lamb said during his stay in Pahrump, he has learned the “truth,’”but had still offered no evidence, other than what he said the inmates have told him over the phone.

Regarding Bundy’s situation, Lamb claimed the inmate has endured what he termed as “cruel and unusual punishment.”

Lamb also spoke of what he termed as a defense fund for Bundy.

“The day is number four, and as of Wednesday night, we brought in almost $18,000 from across the world,” he said. Norway, Switzerland, the U.K., and all across the United States. Today is day seven, and we are going to be here at least ‘till May 20th or longer, we don’t know, but we are in for the long haul. There are at least 25-to-30 of us here every day and sometimes more.”

Lynzey Donohue of the U.S. Marshals office headquarters disputed all of the claims protesters have raised.

“The U.S. Marshals Service is responsible for the safe, secure and humane care of approximately 51,000 federal prisoners daily,” Donohue stated via email. “We are aware of the federal civil suit filed by Ryan Bundy, which addresses his treatment at the Nevada Southern Detention Center, one of the facilities in which we house pretrial inmates. We cannot comment further as the matter is in litigation. In addition, as a matter of policy, we do not disclose information related to individual prisoners to protect their privacy, safety and security.”