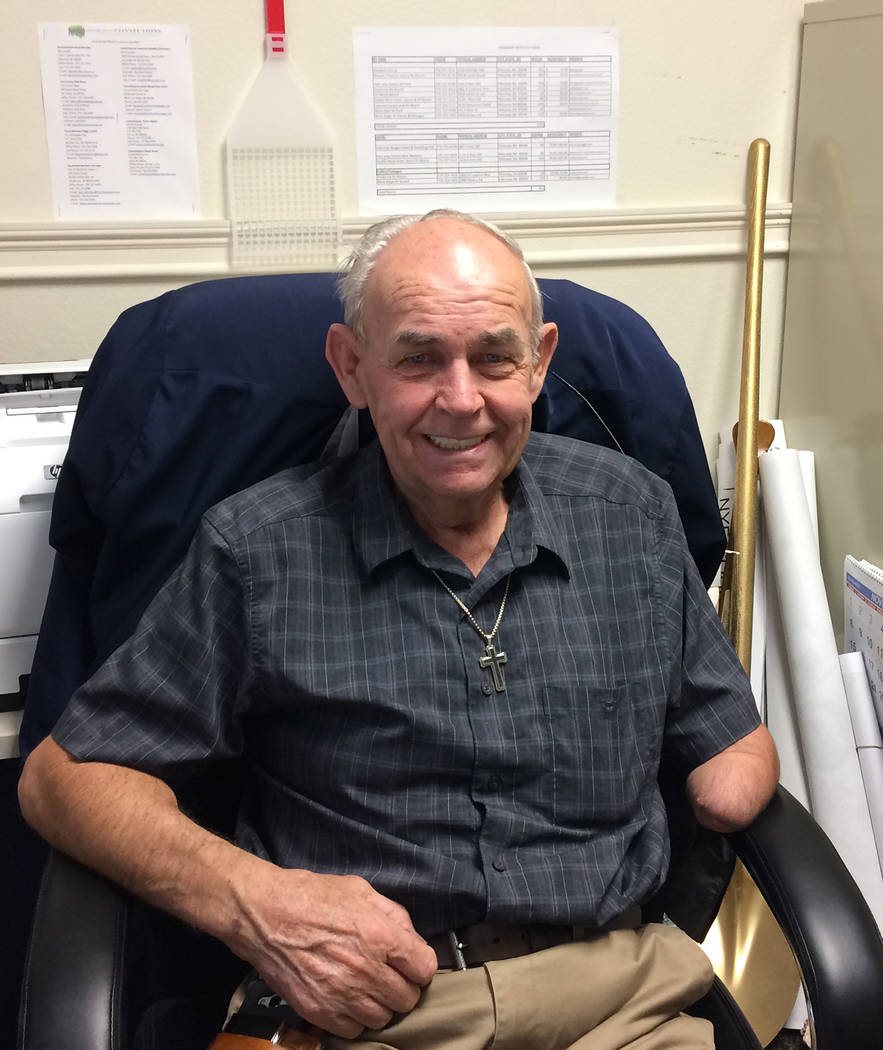 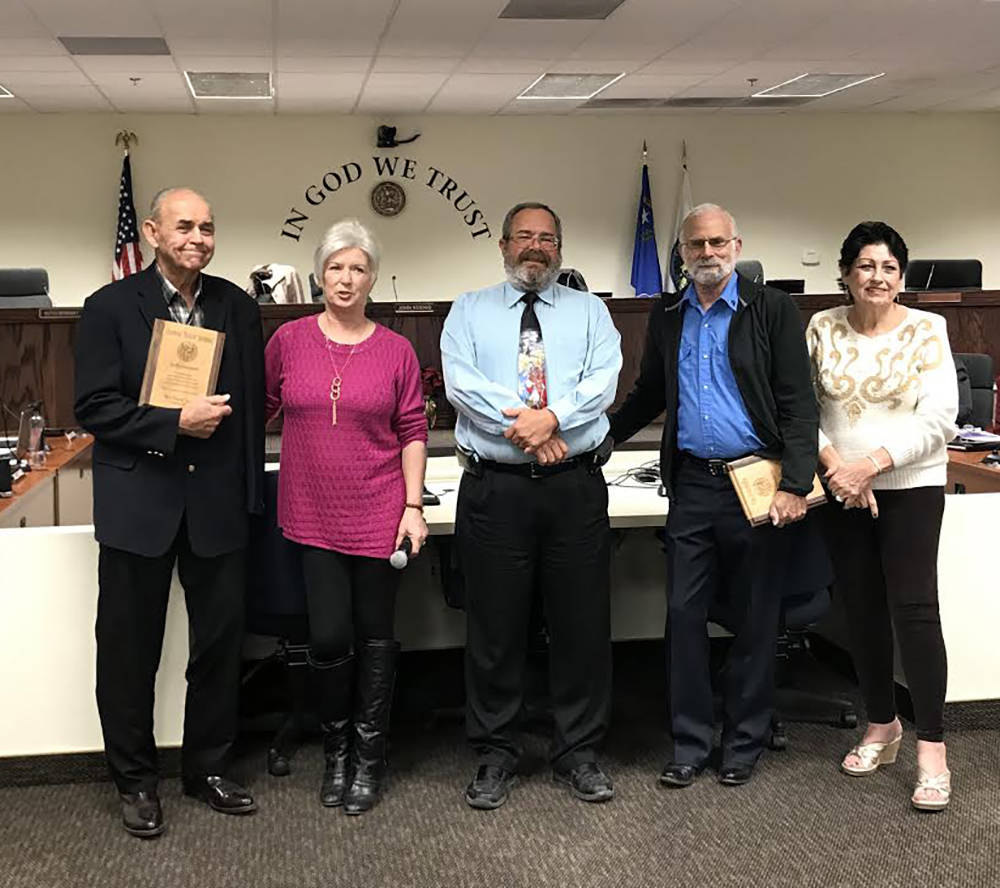 Special to the Pahrump Valley Times From left to right are Nye County Commissioners Butch Borasky, Lorinda Wichman, Dan Schinhofen, John Koenig and Donna Cox. Borasky and Schinhofen are both preparing to leave their seats on the commission and were presented with plaques to commemorate the many years they have spent serving the county and its residents.

After a full dozen years as a Nye County commissioner for District 4, Butch Borasky has reached his term limit and is preparing to bid the county farewell. It is a bittersweet moment, Borasky said, but he has every intention of staying involved in the community as he enters the newest chapter of his life.

“I have always been community-minded to begin with and when I came here, one of the first things I did was meet a group of men who were having a men’s fellowship breakfast. It was just getting started when I got involved and that group is still up and going. It has grown into a bigger group and they focus not just on religion but also on what is going on in the community. So that is kind of what originally got me to be more inclined to be involved here,” Borasky detailed in his farewell interview with the Pahrump Valley Times.

With this inspiration, Borasky started attending Pahrump Town Board meetings, listening to the issues and discussions, which further piqued his interest in the community. He ended up earning an appointment to the Pahrump Regional Planning Commission, his first real foray into local government, which naturally led to his seeking a Nye County commission seat. His first bid for office was in 2005 and Borasky was re-elected twice more, giving his three four-year terms and 12 years with the Nye County Commission.

Over the years, Borasky said there have been a lot of triumphs and of course, disappointments as well, but overall, he was glad to have been able to serve the county for so long. However, it was not so much the work he had done in the county itself that Borasky honed in on but rather the work he had done in with many local organizations, all geared toward making Pahrump and Nye County a wonderful place to call home.

Working with the NyE Communities Coalition and the plethora of subcommittees that have grown out of that entity are some of Borasky’s favorite memories, he said. From the Holiday Task Force to the Community Outreach meetings, helping find ways to bring the community together and give those in need a hand up has always been a priority for Borasky.

He has also placed a major focus on the veteran population, founding the American Veterans Foundation of Pahrump, working closely with the Veterans of Foreign Wars Post #10054 over the years and even partnering with local veteran Dr. Tom Waters to get veterans signage in the county and town.

The Pahrump transportation committee, which brought the Pahrump Valley Public Transit system to town, is undoubtedly one of his most treasured groups. “That has now blossomed and we actually have a bus service. But the disappointing thing about that is, if the county commission and the town board would have listened a few years ago, there could have been brand new, clean-air buses driving around town right now because a grant from the state was there at that time…” Borasky stated. “If we had gotten it going then we would be so much farther along now. But that’s all right, we are getting there, we are growing and we have very dedicated individuals who keep it rolling.”

The annual Fourth of July Parade, which has become a beloved tradition, is yet another example of what Borasky has done in the community but he was quick to point out that he could not do the parade, nor any of the many other things he has, without everyone else who has dedicated time and energy to these many causes.

Outgoing commissioner Dan Schinhofen was an integral part of kick-starting the parade and has been instrumental in keeping it going year after year and the Veterans of Foreign Wars Post #10054 along with the volunteers who come out to work it are the backbone of the enterprise. “It takes an army to do these kinds of things, it really does,” Borasky said. “It take a lot of people coming together to get things like this done and that’s what I want to keep doing in the future. It’s a group effort. It was and it will continue to be a lot of fun, because I am going to stay involved with that as well. I don’t plan on letting that go away.”

As his interview came to an end, Borasky shared his plans for the future, which are just starting to form.

“I am going to stay active in the community. I am debating, I have had a of couple offers and I am not sure exactly what I will be doing, but whatever it is, it will be something to help the community be a better place to live. That has always been my goal, since I moved here. When I came to visit here, I saw there was a lot of potential for this town,” Borasky said.

“I’m not sure but I think I am looking toward a service where I can help people on dealing with Nye County, so they don’t have to go pay big money on a consultant to go in and talk for them. I know all the commissioners well and I can get along with anybody, I understand how to talk to them and how to advise someone on how to get through the system.

“That is something I think I will be doing, but only part-time,” Borasky concluded. “I’m staying involved with all the community groups, the churches, the veterans, all of it. You know, I had to go through a pretty rough time, I lost my wife and that put me in a very down mode. I did have a little dip there for a while but that’s to be expected when you lose somebody that you spent 40 years with. But I met someone else and things are going well. It’s brought me back up to where I belong, being energetic and involved and everything.”