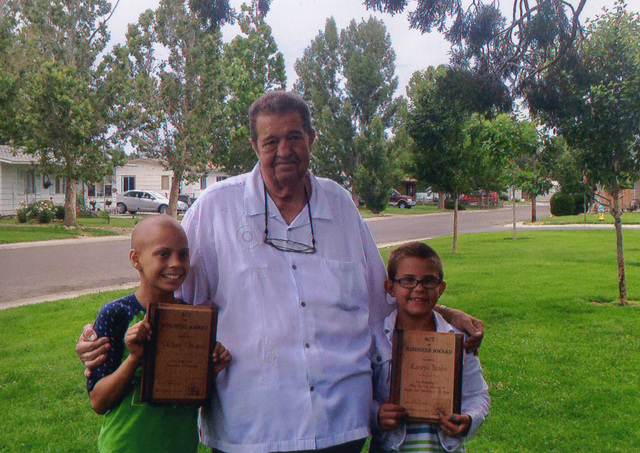 Harper is credited with starting the local Act of Kindness Award several years ago, where he would personally present an inscribed plaque to local individuals who worked to make Pahrump a nicer community.

A memorial service is scheduled for Saturday at 11 a.m. at the Pahrump Nugget. Local television anchor Deanna O’Donnell, who knew Harper for eight years, is organizing the service.

O’Donnell said Harper was at the television station Friday planning for a Tuesday presentation.

“I always made a point to tell him I love him and I tried to always give him a hug whenever he left the station,” she said. “When he was leaving the station on Friday I was going to give him a hug but he was already getting in his car and I just said to myself I’ll get him later. I feel guilty now, but I always made it a point to tell him how much I cared about him. It would embarrass him a little bit but it was fun.”

During an interview with the Pahrump Valley Times last year, Harper said he’s been in the news more often and in more cities across the country than even he can count.

He began his goodwill expedition as a way to make amends for the years he spent as a debt collector for a loan shark.

Growing up in Chicago, Harper said he was in with the wrong crowd. He noted that just like Las Vegas, Chicago had its own organizations.

“The bosses set the time for the payment and if they didn’t get it, someone would knock on your door,” he said at the time. “I’ve told people before that you wouldn’t have liked me years ago. I wasn’t a nice person.”

Harper’s first goodwill effort began in 2009, when a local boy with cancer wanted to set the world record for the most business cards collected by a single person.

Harper helped 10-year-old Brandon Rayner collect more than 1 million cards before he succumbed to the disease. It was Rayner, Harper said, who inspired the act of kindness award.

“He was a fighter,” Harper said. “He never gave up. He was an inspiration for me. He was my little soldier. Anyone who doesn’t understand why I do what I do should visit a children’s hospital and see the children that you know will never go to the prom or graduate high school. It breaks my heart.”

O’Donnell noted that once Harper got the goodwill ball rolling, people would routinely make donations of money or materials for the plaques.

“Butch would come to their house and pick it up,” she said. “He did all of the leg work and he was the hub for people who wanted to do good deeds.”

O’Donnell said a new Facebook page for people to volunteer in the community has been opened called the Andre Butch Harper Volunteer Corps. The act of kindness award will be renamed in his honor.

O’Donnell said Harper was always looking for volunteers in town who wanted to give, but didn’t know how to give. She noted that all of Harper’s goodwill efforts were done with his own money if he did not receive donations.

“He would travel across the country on his own dime doing things everywhere,” she said. “He bought the act of kindness awards on his own dime, but he would ask people to donate and sometimes he would get donations from them.”

Aside from the act of kindness award, Harper also took it upon himself to help fellow veterans in and around the Pahrump Valley.

He was well known for collecting buttons, patches and insignias to display in a framed collage saluting the military, military veterans and first responders.

“He so embraced the veterans and all of the different organizations,” she said. “Not only doing things for the children of the community, but I think his heart was really with the veterans,” she said.

“He would travel from one state to another and visit children’s hospitals and VA clinics and provide the collages,” he said. “He would write letters of support to the town and county saying ‘we are with you.’ The man was very passionate and if you listen to his story about where he was when he was young, to where he is today, he’s a totally different individual.”

Additionally, Harper helped local senior citizens with various necessities, or he would round up contributions to help purchase them.

He has also been known on more than one occasion to pay a bill for someone or buy them groceries.

“I can’t stop. I just never learned to say no,” he once said. “I know just about everyone here. I make a few phone calls.”