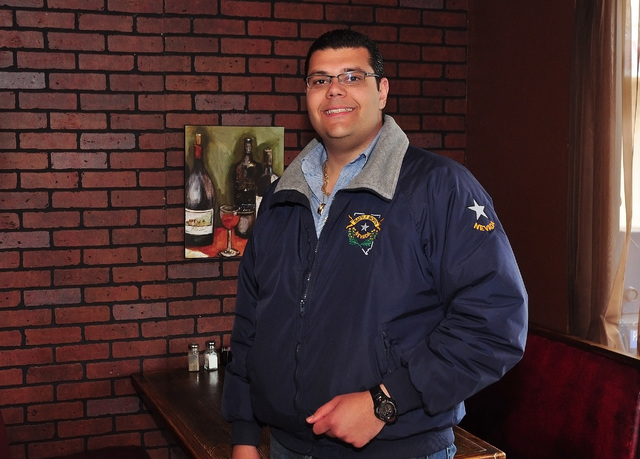 Blundo, who is in the midst of a campaign for Nye County Commission, is facing the charges after prosecutors allege he failed to stop and locate the owner of a scooter he allegedly struck in the parking lot of the Pahrump Nugget 12 months ago.

Blundo believes the timing of the charges and pursuit of the case is politically motivated.

“I am confident voters will see this for what it is,” Blundo said. “Shame on the DA’s office for political games.”

Charges were filed roughly two weeks to the day after Blundo filed to run for the county commission seat.

District Attorney Angela Bello said in April there was no political motivation, and that often this type of case “would sit around because it’s not the highest priority.”

Blundo’s defense attorney, Thomas Gibson, said he and his client chose not to accept a plea agreement offered by prosecutors Monday.

“The hearing was pretty mundane because it was just an arraignment hearing,” he said. “We pleaded not guilty and set the matter for a pretrial.”

Gibson opted not to disclose any details regarding the offer.

“I won’t get into what the offer was because it’s not really relevant,” he said. “The DA’s office automatically gives an offer and it’s one that is often massaged and changed several times before anything happens. All I’m going to say is an offer was extended but it’s also extended in every other case as well.”

Prosecutors contend Blundo should have left a written notice in a “securely, conspicuous place, that provided contact information to the scooter’s owner.”

A second count claims Blundo failed to notify the Nye County Sheriff’s Office of the collision, which occurred on May 31 or June 1 of last year. The Nye County District Attorney’s Office did not file charges until March 30, a few weeks after he declared he would run for office.

The candidate receiving the most votes in the June 14 primary will run unopposed in November because no other party candidates filed for the office.